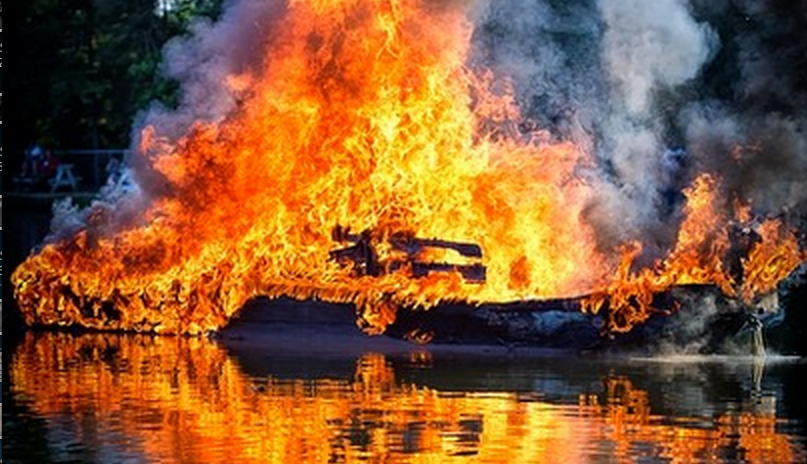 As part of this year’s GWAR B-Q in Richmond, VA, the band gave their late leader, Oderus Urungus, a true Viking sendoff aboard a flaming Viking ship. David Brockie, the man behind Oderus’ visage, died earlier this year from a heroin overdose. A private service for Brockie was held on April Fool’s Day, but the memorial on Friday was a chance for fans to put their beloved alien warlord to rest.

The ceremony opened with a trio of eulogies by Lamb of God’s Randy Blythe, Holliston creator/writer/director/star Adam Green, and GWAR’s long-time publicist Jon Freeman. During his speech, Blythe noted that he also eulogized Brockie back in April. “Dave is the only motherfucker I know who has to get put away twice,” he said. “He’s too big for one fucking funeral.” Green shared an old voicemail from Brockie he’d saved for months, and Freeman relayed a story about getting the word “twat” approved for a GWAR press release.

After the speeches, a Valkyrie with a flaming sword led a procession to Hadad Lake. There, the Oderus Urungus costume was laid out on a small Viking ship. As per Viking tradition, a flaming arrow was shot into the boat to set it ablaze, and Oderus was returned to the alien demon gods in a pyre of flame and firecrackers. Blythe posted the above image of the pyre on Instagram with a message about how watching the memorial with thousands of fans was more emotional than the actual funeral service:

Tonight we sent Oderus home in a fitting manner at the public memorial for Dave Brockie. A blazing Viking ship with Oderus laid out in it, the cuttlefish pointing proudly straight up. Watching my friend Dave’s costume go up in flames in front of a thousand fans was so much more intense for me than the private memorial for friends & family we had April Fool’s Day. I spoke at both of them, as GWAR asked me to, & both times as I spoke I was sad.

But watching his alter-ego burn tore me up way more than the first memorial, maybe because there was Dave, the human who was my friend who just “left us”- I never saw his body- & then there was Oderus, who was something entirely else. To watch his stage gear burn was like watching part of my life literally go up in flames. I was sobbing my eyes out as I took this photo. It was just a super-intense moment. Very beautiful, but overwhelming. Fly free, Oderus- you are missed.”

Brockie was 50 when he passed away on March 24th. Shortly after his death, his surviving bandmates launched the Dave Brockie Foundation to “endeavor to encourage promising talents, as well as preserving the legacy of Dave’s body of works.” Below, you can find video of the arrow shot, the funeral pyre, and the eulogies from GWAR B-Q.