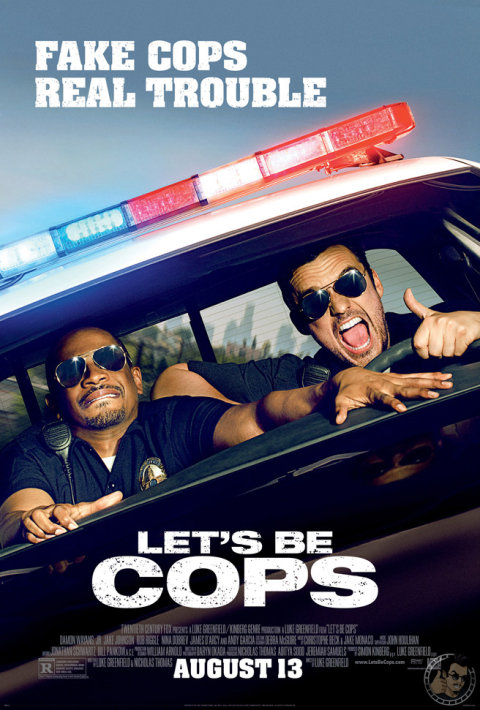 We follow Ryan (Jake Johnson) and Justin (Damon Wayans Jr.), failed dreamers and phony fuzz in L.A. Ryan is living off herpes commercial dividends. A former Purdue football star (given his size, not a chance), he injured himself, thus creating a post-athletic misery that would make Terry Malloy cringe. Then we have Justin, a nerdy, nebbish game designer unable to pitch a reality-driven cop game (hey, that’s the focus of the movie!) to his arrogant boss.

Director Luke Greenfield then goes for a cheap-o shift, going all Beverly Hills Cop with tonally regrettable action stuff. James D’arcy is some non-descript Eastern European jagweed criminal with spider-web tattoos aplenty. A big face scar, too. Is this guy satirical or serious, Luke? You’re not making it work either way. It’s all boys with toys stuff, and while seemingly innocuous escapism at first, it becomes more offensive as you think about for the film for a moment. Let’s Be Cops screws itself up so badly by forgetting to be fun.

Who in their right mind wouldn’t catch on to these two doofuses? Watch a single episode of Law & Order, and you realize that the film is nowhere near silly enough to let Ryan and Justin sneak by with fake guns and false badges. As an audience member, there’s no selling you on their scam. You feel especially bad for Rob Riggle, playing a real cop that befriends the two. He’s so inept that he lets Justin and Ryan go on patrol with him and check out equipment without any background checks whatsoever. There’s an apt moment, when Justin and Ryan try to confess to a clerk that they’ve been pretending to be cops. The clerk repeats, “that’s not funny” while shaking her head. She gets it!

Jake Johnson will survive this. Rob Riggle too. Damon Wayans Jr., is still evolving, so we’ll let him pass as well. But guys, you’re all bright talents – read the script harder, and ask yourselves: does any of this make sense?

(An addendum: It should also be acknowledged that Let’s Be Cops is coming out in the wake of the riots and police brutality of Ferguson, Missouri that occurred in escalation over the death of 18-year old Michael Brown at the hands of a police officer. There’s a lot of tension in the air, most of it coming from the sad reality of police still using excessive force, abusing their power. This is a movie about guys dicking around in police uniforms that ends with a needless gun-show action scene. In the wake of the militaristic police state in Ferguson, this movie feels gross. It makes cops look oblivious and idiotic, and well, maybe that’s a plus. Right now, there just doesn’t seem to be anything funny or exciting about being a policeman in America.)