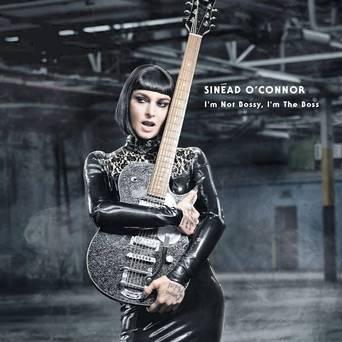 The album title might sound like a module from a self-assertiveness course, but Sinead O’Connor’s tenth studio album in a 27-year career is really a continuation of the journey the Irish songstress took with her 2012 “comeback” release, How About I Be Me (And You Be You)? It begins with a song that takes its title from that same record and goes on to explore love and romance from often contrary standpoints. Though O’Connor and controversy go hand-in-hand, last year it was her spat with Miley Cyrus that took the headlines. The Catholic Church must have been much relieved. It is spared any further examination here, not that any fallout from Cyrus is evident, either. So, put away any thoughts that O’Connor posing, axe in arms in her Cleopatra wig and dominatrix dress, on the album cover is anything more than a bit of fun.

Back to that album title: I’m Not Bossy, I’m the Boss takes its cue from the “Ban Bossy” female empowerment campaign. Listening to the record, you sense that O’Connor is equally reaching out to young women; she is finally her own boss and feeling great in the role. She has a voice, and it’s helping her put lots of her past behind her. The new record is a more consistent ride than her recent records. Sure, there are transitions in mood, but the focus is on love songs with vitriol supplanted by a brand of joie de vivre, the darkness still there but distanced. The new songs continue to skirt her need to love and to be loved, but this time O’Connor tells her tales through a series of third-party voices. It gives her increased leeway to be objective, with the summary message appearing to be this: Don’t over-romanticize relationships; try to see people for what they are rather than what you might imagine them to be.

“How About I Be Me” sets off the journey with a musical nod to “Nothing Compares 2 U” in its arrangement and an affirmation that a “real full woman” needs the arms of a strong man. By track 10, the same character has traveled far enough to set aside the bonds of conventional romance. The redemptive “Take Me to Church” balances its album-oriented rock gloss with the singer’s passionate delivery, which adds cathartic edge to an otherwise tuneful but straightforward pop rocker. In the accompanying video to the song (the album’s lead single), a now auburn-wigged O’Connor cavorts, Gibson in hand, in a tight latex dress, but the performance dispels any sense that she might be taking on Cyrus, which sells the song rather than the body. When she sheds the wig with a single dramatic sweep of her hand, it’s a great visual affirmation that knights are overrated: “I’m the only one I should adore.” The only shame is that the song seems to have been shortened to meet a three-minute rule.

O’Connor’s long-standing producer and ex-husband John Reynolds is still at the helm, and this time around he’s brought a rockier edge to many of the songs. The vocal effects layered atop O’Connor’s already individual and distinctive voice create a kind of hallmark that is undeniably Sinead O’Connor, a union of raw power and fragility. On this album, there is also a smattering of blues, overtly on tracks like “Dense Water Deeper Down” and “The Voice of My Doctor”, but also underpinning a song like “Your Green Jacket”, in which O’Connor, imbued with impassioned longing, buries herself in her lover’s clothes to get closer to him.

Elsewhere, like on “Kisses Like Mine”, O’Connor adopts a playful mood and a more personal voice: “See, I’m special forces/ They call me in after divorces.” In “8 Good Reasons”, she talks about contemplating suicide and the reasons for sticking around. She singles out the music industry and the pressure to perform, but it would seem that’s not the only aspect of her life that led to her wanting out: “You know I love to make music/ But my head got wrecked by the business/ Everybody wanting something from me/ They rarely ever wanna just know me.” Wanting to be known for what you are rather than what you do is a recurring theme. Superficially, “Harbour” might seem like a customary O’Connor confessional, but it’s much more of a third-person commentary on a woman without a father as a protector and how this leads her to make wrong choices in relationships. Closing the album, “Streetcars” resolves these issues with the character now feeling safe and reconciled to the way things are: “There’s no safety to be acquired/ Riding streetcars named desire.” It is also O’Connor’s most delicate vocal on the record and one that reminds that even the lioness can play kitten.

Essential Tracks: “Take Me to Church”, “Your Green Jacket”, and “Streetcars”