Harvey Danger – Where Have All the Merrymakers Gone? [Reissue] 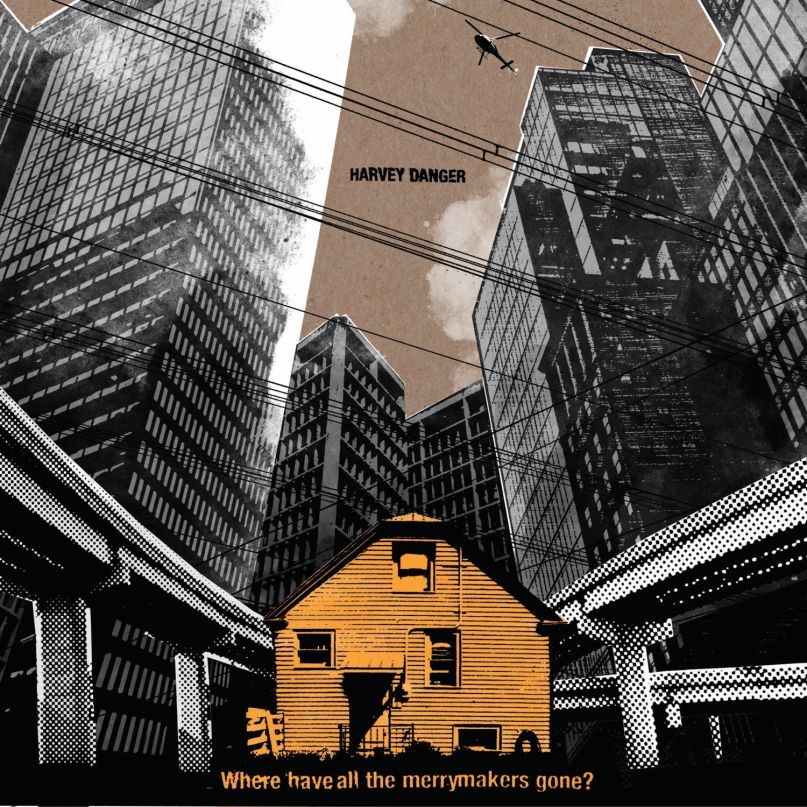 One of the first things you’ll notice about this reissue is the new artwork. There sits the clapboard house, still colorized like a woodcut stained with Cheeto dust, still placed front and center. It’s much smaller, though — dwarfed by its surroundings. Or maybe we’ve just backpedaled a few paces. The old neighborhood, the residences and cul-de-sacs we’ve imagined encircle the house, are absent, with steel and glass offices and parking garages now towering overhead. This urban development has triggered an influx of white-collar workers and tourists who crowd through the freeways, that bank between the edifices. The whole thing could be a street art poster for Pixar’s Up. But if you know anything about Harvey Danger’s career, the symbolism here is obvious.

Back in 1997, the Seattle quartet had a run at the top floor of one of those skyscrapers with Where have all the merrymakers gone? — or, rather, with “Flagpole Sitta”, the album’s snotty hit single. The song made them MTV darlings, allowing them to spend the better part of a year relaying Pixies-style alt rock to festival crowds and television audiences and netting them half a million sales of their debut album. Then came label delays and a dried-up reservoir of hit material. You’d be lucky to find a copy of their next two records anywhere in-store, but the clearance section would be a good place to start.

Aside from the new cover, not much about this re-release from California label No Sleep Records is revelatory. No bonus tracks, no demos or remixes, not even a remaster. About the only novel thing is its format and its color (white), in keeping with the label’s interest in the contemporary resurgence of vinyl and, coincidentally, a separate influx of ’90s nostalgia. To those who have been dying to crank “Sitta” on their Crosley at full volume: Go nuts.

Otherwise, the folks at No Sleep have decided to leave everything as is — from the Vertigo narrative of “Carlotta Valdez” to the eight and a half minutes of slow crunch that is “Radio Silence”. Things are just as you remember, which means that, depending on your 17-year-old self’s opinion, the music is either derivative or holds its own. Or perhaps extremes can be reconciled: “Terminal Annex” wobbles from R.E.M.’s “Orange Crush” to Green Day’s “Longview” and back again, verse to chorus to verse, somehow making the changeover feel totally organic. Whereas Michael Stipe opted for helicopter rotors at the bridge, Sean Nelson has ghostly vocal drag behind his every word.

This record reproduces not so much a set of songs as a moment in time, the mid-fi tinkerings of kids who didn’t know a whole lot about recording or the music industry, but knew that they were restless. Subsequent output — especially their final effort, the stately Little by Little… — employed the Alfred Nobel strategy, trying to mask killjoy notoriety by pulling an about-face. But it sounds more like flippancy and a little exhaustion, prancing defiantly where merrymakers flails in the hopes of wooing a crowd. Harvey Danger hadn’t yet flown close enough to the sun to be burned, and their songs hadn’t been tempered as a result.

With this reissue, No Sleep is peeling the wrappings back, asking listeners to reconsider an anthem’s opening lines: “I had visions, I was in them/ I was looking into the mirror/ To see a little bit clearer/ The rottenness and evil in me.” The label has no motive other than appreciation, and because of it, their vision is as clear as it’s ever going to be.