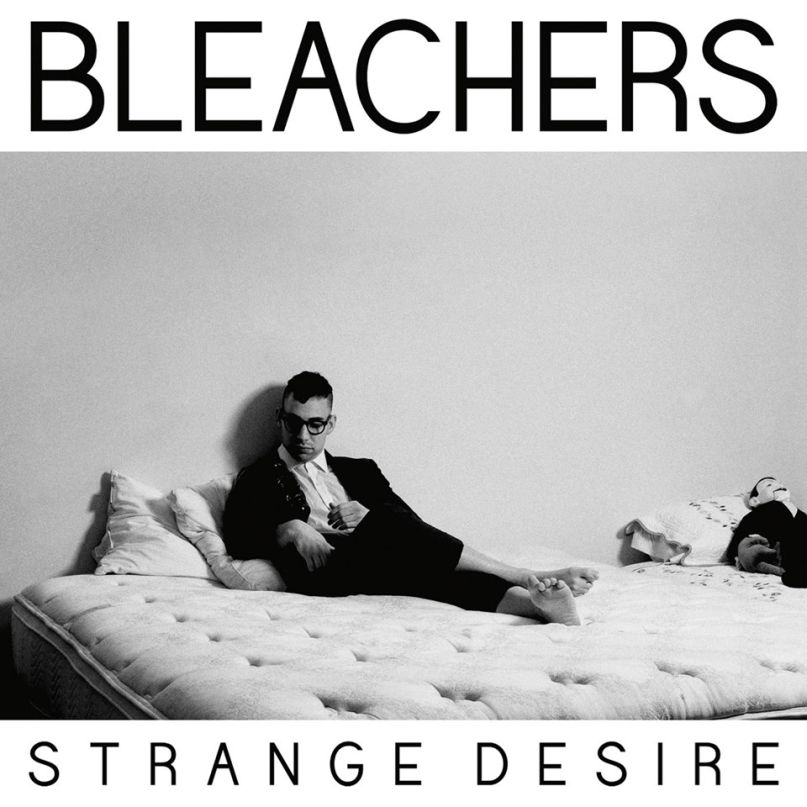 Jack Antonoff has worn many musical hats in his career, from fronting the now-defunct pop rock act Steel Train, being one third of the uber successful fun., and writing songs for the likes of Sara Bareilles, Taylor Swift, and Tegan & Sara, to starting his own ‘80s-inspired solo project, Bleachers. While he’s been fairly prolific with a variety of different outlets, he’s never veered away from the bombastic, unapologetic pop song. Strange Desire, his debut album under the Bleachers moniker, is also unreserved in its pop aspirations but an unequivocal clunker in execution.

As the project’s name itself suggests, Bleachers nostalgically evokes being in high school: being young and confused and watching cheerleaders and football players while being the loser kid sitting in the back. It’s pop music marketed to an optimistic underdog. Like fun.’s Some Nights, which tackled loneliness and the like while being relentlessly hopeful and redemptive, Strange Desire extends this formula. On “Shadow”, he sings of “girls waiting by the phone” and “boys with the broken hearts” with the scene-setting imagery of a classic high school movie.

Lead single “I Wanna Get Better” is actually one of the album’s best tracks. It feels like a successor to one of fun.’s most anthemic offerings, “We Are Young” or “Carry On”. It clobbers the listener with abounding optimism, complete with a monster, scream-it-at-the-top-of-your-lungs chorus. There are other high moments, like the rollicking “You’re Still a Mystery”, which is what a happy Depeche Mode would sound like. On those songs, the finely-tuned pop songwriting speaks for itself.

In fact, Depeche Mode and Erasure member Vince Clarke contributes to the album in an unspecified role. Presumably, Clarke acts as a vintage counterpoint to producer John Hill, who Antonoff in the press materials notes is “very modern in everything he does.” When Strange Desire attempts to infuse modern music into the synth-heavy pastiche, the results are almost disastrous. On the Grimes-assisted “Take Me Away”, there’s grotesque Auto-Tune, which by itself wouldn’t be a bad thing, but it’s such a jarring departure from the album’s emotional center; it’s distracting at best, tossed-off at worst. There’s a confusing Yoko Ono-guest appearance on “I’m Ready To Move On/ Wild Heart Reprise”, Owl City-esque arrangements on “Wild Heart”, and an out-of-left-field electronic drop on “Like a River Runs” that’s little more than pure pandering.

Antonoff’s voice is less versatile than it is malleable. Throughout the record, he changes his tone, delivery, and range to make it sound like there are at least four main vocalists. On the anthemic songs, like the “Dancing in the Dark”-lite “Rollercoaster”, he channels his inner Patrick Stump, while on songs like “Reckless Love” he drops his voice to sound like someone impersonating The National’s Matt Berninger. Where Antonoff doesn’t put on any of these affectations, like on the understated, romantic surf rock of “Wake Me”, he does make his case as a notable frontman.

Strange Desire is like a John Hughes film without the nuance and humor, all ‘80s schmaltz and all catharsis, or at least attempted catharsis. Like Hughes, who Antonoff cites as an indirect inspiration, he tries to capture what it’s like to be a teenager, and, to a certain extent, succeeds. There are some good songs on Strange Desire that capture the ‘80s touchstones, digging deep into our nostalgia reserves for that warm-and-fuzzy feeling that pop music is so good at harnessing. But when it overstuffs what could be a passable song with of-the-moment flourishes like robotic Auto-Tune, baffling electronic drops, or confusing cameos, the veil falls and feels not only half-baked but also crassly cynical.

Essential Tracks: “Wake Me”, “I Wanna Get Better”, and “You’re Still a Mystery”