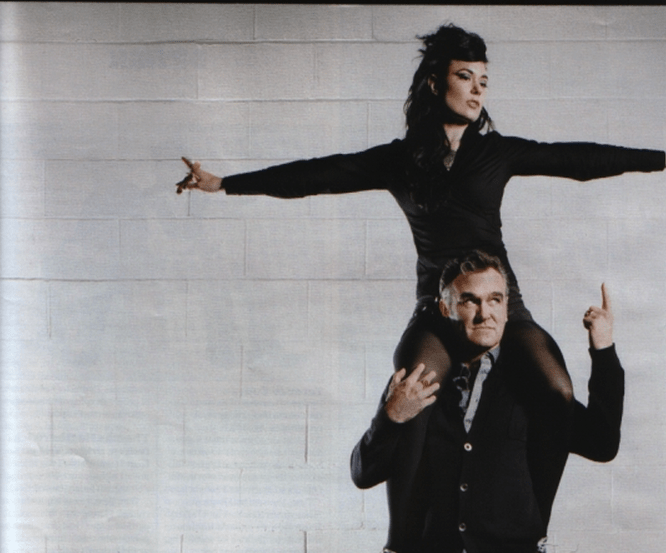 Earlier this week, when Morrissey cancelled another in a long, long, long line of tours, he didn’t blame himself or even a gnarly bowl of penne and tomato sauce. Instead, he placed it all firmly on the head of tour opener, singer Kristeen Young. Reportedly, Young failed to confess “a horrendous cold, the symptoms of which were passed on to Morrissey”, leading to a respiratory infection that caused the cancellation of the tour’s remaining nine shows.

For her part, Young immediately disputed these claims, explaining that she had actually suffered a severe allergy attack and was asked to leave the tour by her booking manager. “I am very sorry that Morrissey is not feeling well,” she wrote. “But I will not tolerate these lies … particularly about my health.”

However, since this is Morrissey we’re talking about, the saga simply cannot end there. In a statement via True To You, Morrissey’s guitarist, Jesse Tobias, has come out against both Young and Tony Visconti, a veteran producer who sided with Young’s version of the event. (Visconti has worked with both Morrissey and Young.)

In the scathing, rather Morrissey-esque letter, Tobias stands up for his boss, calls both Young and Visconti “disingenuous” for saying she was never sick in the first place, claims they kept a “reasonable distance” to avoid passing around any illnesses, and called Visconti a “parrot” for instantly agreeing with Young. If you were ever passed a note in 6th grade, it’s kind of like that.

Read the full statement below, complete with random, awkward capitalization:

It’s been quite Disheartening to see the “Facebook” Hatred thrown about by Our Former Friends/ Working Partners Kristeen Young and Tony Visconti.

I do feel that Someone needs to Speak Up for Moz in this situation as it is unbearable to watch people you once trusted , Attack and Pick Away at your Friend.

In my experience ANYONE associated with the Morrissey Camp know they are solely there because of Morrissey himself.

He chooses to tour/ work with certain people.

For Kristeen and Tony Visconti to go on about Her being better off now, without considering Morrissey’s 9 years of help and promotion is Very Disappointing.

Only speaking from my experience, with the crew and Moz falling ill in Miami, for Kristeen to deny she was truly sick seems disingenuous.

I was told after the show in Miami by Crew and Security that there was some concern because Kristeen was obviously unwell.

Our crew then tried to keep her at a reasonable distance but being in such close quarters for months these things sometimes happen.

I am Upset that in this situation Kristeen could not take the tour as a whole into consideration and just comply with the postponement announcement.

One could only assume it was necessary for her to justify herself and ultimately receive some promotion out of the matter.

This combined with Tony Visconti’s Parrot Like affirmation on “Facebook” that “she is better off, is Morrissey Capable of being handled?” is Repulsive.

This is a MAN who worked closely with us on a record and several sessions that Suddenly flips into Schoolgirl mode with “yeah you tell em” Chatter…??

I don’t know about the rest of you, but this whole incident is turning out better than an episode of Passions.