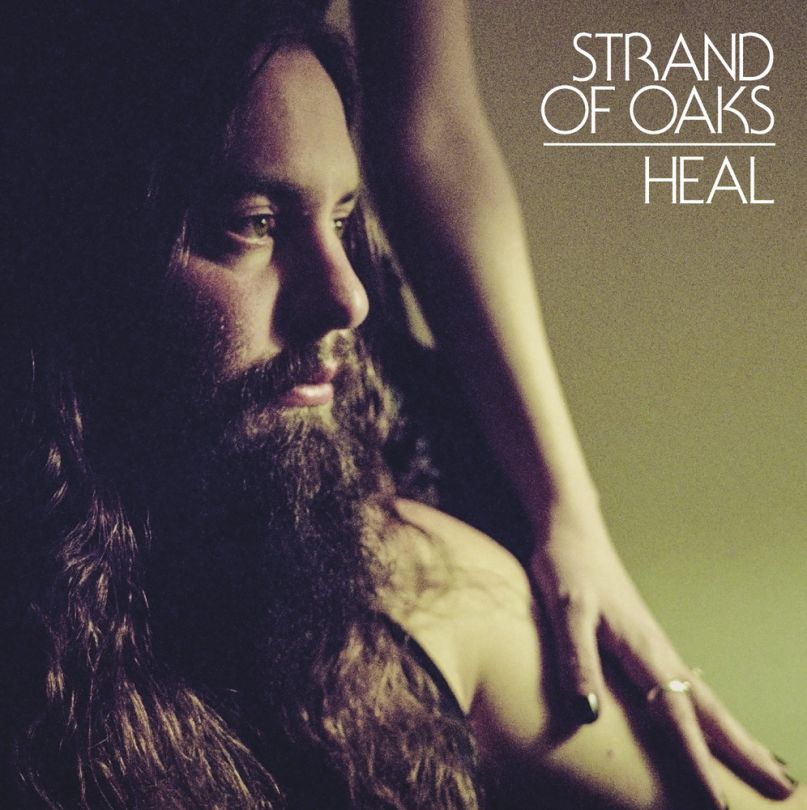 Following his last album, 2012’s Dark Shores, Philly’s Timothy Showalter needed a change. Showalter, aka Strand of Oaks, was disappointed in the record, his hurting relationship, and himself in general. After two years of avoiding those issues through incessant touring, the Philadelphia-based musician reached his breaking point. HEAL, his fourth LP, first on label Dead Oceans, and loudest offering yet, is the conquering result of Showalter’s troubled period. True to its title, HEAL is a cleansing and cathartic album marking not only a musical reinvention for Showalter, but also a personal and emotional one.

Since 2009, Showalter has been making quiet and emotional folk music, beginning with Leave Ruin, a confessional yet ambiguous record born out of a bad breakup and a house fire. On albums like 2010’s Pope Killdragon, he subverted folk tropes over a brooding collection of tracks that included the fantastical “Daniel’s Blues”, which bizarrely took on the perspective of Dan Aykroyd after John Belushi’s death, along with “Giant’s Despair”, a loud instrumental that verged on heavy metal. With those experiments, he would lay the groundwork for the sprawling and powerful HEAL.

Even Dark Shores, which wasn’t as disappointing as Showalter claims, went back to the intimate and quiet acoustic-based tones of his earlier albums. While the record had depth, it wasn’t the record Showalter wanted to make, and it was certainly not the record he needed to make. With its cathartic compositions and unequivocally honest songwriting, HEAL is the record he needed to make. The product of a particularly manic recording session, HEAL took shape after Showalter camped out in his home studio to write 30 songs in just three weeks. Doing away with the soft dynamics and acoustic instruments, the record is a booming statement and a tribute to the rock music he grew up loving.

Showalter is an open book on HEAL, diving into important and traumatic events from his life through an uninhibited stream of consciousness. He starts from the beginning on “Goshen ’97”, detailing his childhood in Goshen, Ind., where he reveals, “I found my dad’s old tape machine/ That’s where the magic began.” Apart from discovering the music, it was a time where he hid cigarettes under his bed, got drunk in the basement, and sang “Pumpkins in the mirror.” In the chorus, he resoundingly sings, “I was lonely, but I was having fun,” nostalgically encapsulating the solace music offers to teenage angst and confusion. While he admits, “I don’t want to start all over again,” HEAL showcases Showalter doing just that.

Not only does Showalter’s favorite music surface throughout the album through various genre touchstones like screeching ’70s lead guitars, arena-filling drums, and ’80s synths, he addresses the connection directly. Highlight “JM” is an epic seven-minute tribute to one of his idols, Jason Molina of Songs: Ohia and Magnolia Electric Co. In March 2013, Molina died at 39 from organ failure after a decade-long struggle with alcoholism. While his loss is still sorely felt, Showalter quietly coos, “I had your sweet tunes to play.” Here, he channels Molina’s mournful storytelling and his breathtaking ability to jump from rustling quiet to deafening fortissimo. Even in Molina’s absence, Showalter looks to his music: “I won’t let these dark times win/ We got your sweet tunes to play.”

Ultimately, Showalter doesn’t let the dark times overpower. HEAL‘s best song, “Shut In”, may also be its most hopeful. Though he wonders, “I lose my faith in people/ Why even take the time?/ You’ve got your problems/ I’ve got mine,” he realizes, “It’s not as bad as it seems/ We try/ In our own way/ To get better.” It’s a thrilling, revelatory moment, backed with zipping lead guitars, with a mix of bright guitar and piano chords. “Wait for Love” ends the record similarly optimistically with a plea for patience (“You’ll find meaning in your life/ And then you’ll complicate it even more”) and a resolution (“I’m giving up getting over you”).

While Showalter has always been revealing in his narratives, he’s never been this uncompromisingly direct with his emotions. Throughout HEAL, there’s astoundingly little ambiguity as he sings clearly and frankly. The title song features the realizations “I know you cheated on me/ But I cheated on myself” and “I knew it wasn’t her/ And I knew it wasn’t me.” It’s uncommon and penetrating insight. Though he’s performed lyrical autopsies on suffering relationships before, never has he been so candid, even going so far as to say his partner’s name, Caitlin, on “HEAL”. He gets nearly violent over her infidelity on the quiet but sulking “Mirage Year”: “That winter when you took my love/ And that fucker was having his fun/ But my hands are worth more than your blood.” Only on “For Me” does Showalter notably veer away from the straightforward lyrics, with a metaphor that captures the all-encompassing, occasionally apocalyptic power of his emotions: “The sun fell out of the sky.”

Showalter drapes HEAL in nostalgic and thundering arrangements, a far cry from the whispering acoustic guitars and occasional lightly tapped drums of his previous recordings. HEAL is a rock record, unabashed in its influences and unbridled in its execution. There are booming drum fills on songs like “Woke Up to the Light” that sound straight out of Phil Collins’ playbook, complete with spacey and slippery synths on “Same Emotions” that reference New Order and occasionally the grand atmospherics of his fellow Philly natives The War on Drugs’ Lost in the Dream. Of course, there are also loud, shredding guitars and distortion-based freak-outs that, along with J Mascis’s piercing solo on the opener, offer thunderously menacing tones on “JM”, “Mirage Year”, and “For Me”.

If Showalter had kept the acoustic guitars and remained an intimate singer-songwriter for HEAL, the album would have been almost oppressive in tone, too overbearing in its emotional resonance. Fortunately, his homages to the rock music that raised him provide the perfect soundtrack for the incredibly powerful emotions of his present. 2014 has already seen more or less spectacular albums like Sun Kil Moon’s Benji and Sharon Van Etten’s Are We There, both made by artists unrestrained from completely pouring out themselves. Where the freewheeling Benji painted lyrical autobiographies in painstaking detail and Are We There dove headfirst into dark and sometimes overpowering emotions about toxic relationships, HEAL is a mixture of the two, a cleansing document that’s ultimately more hopeful. Maybe HEAL is such an enthralling listen because it actually isn’t for us. It’s for Showalter.