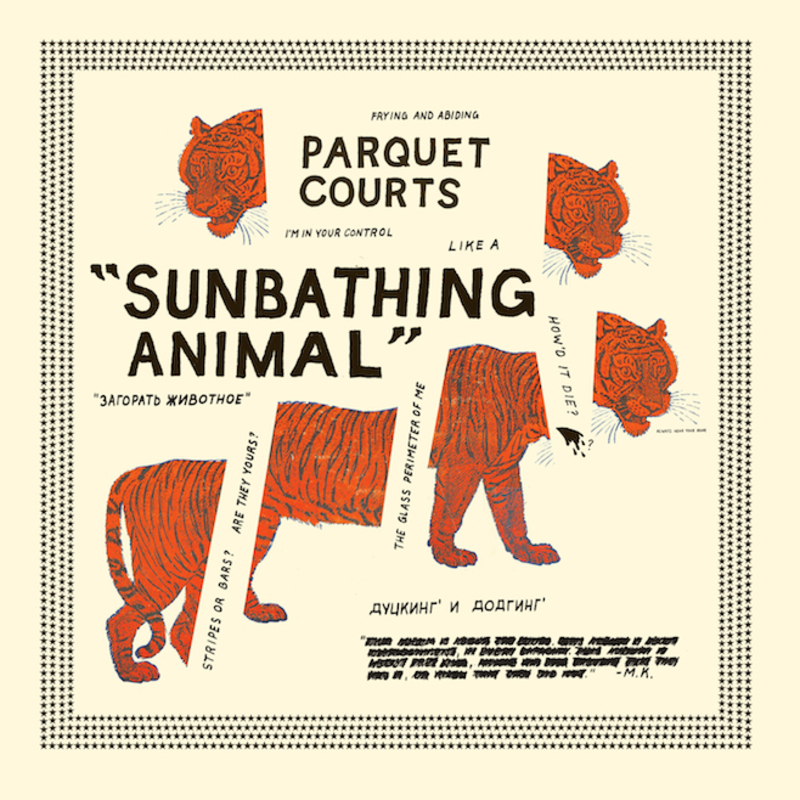 Parquet Courts are lumped in with the like-minded guitar bands that came before them, but it diminishes their creativity to dismiss them as Pavement wannabes or the nu Swell Maps. While the Brooklyn transplants certainly borrow some elements from indie rock’s past, it’s more that they share the ethos — a complacency to play music however they want, free from critical expectations and the overcrowded music industry. But the most intriguing thing about Parquet Courts is that you can hear frontman Andrew Savage actively grappling with this search for self-actualization. What’s the point, why am I doing this, is anybody listening? By asking these questions, he turns the proverbial artist’s dilemma — the fear of going unnoticed and disrespected — back into his art, lyrically and stylistically.

The band’s sophomore album, last year’s Light Up Gold, fixates on such topics with songs like “No Ideas” and “Caster of Worthless Spells” wallowing in self-consciousness and fears of un-originality. But there was also the sense that the band members were becoming resigned to their fate, no longer possessing an identity crisis about music but rather making music about having an identity crisis. Savage could only sing about two notes, yet he kept singing. The guitars were ragged and broken, yet they kept playing. It all felt like a metaphor for what it was like to actually be stoned and starving in the big world, being true to one’s self and “abiding,” as the artwork of their third album, Sunbathing Animal, reads.

The record picks up with that same vibe of not caring but sorta caring. Although the songwriting is more confident in its complexity, it’s all played as lazily as possible while still remaining tight, and Savage’s anti-singing returns in full effect. The ambivalence acts as the crux of Parquet Courts’ sound and what makes them such a polarizing band. Those expecting polished rock ‘n’ roll will be taken aback by the opening volley of “Bodies Made Of” and “Black and White”, with their sparse production and nonchalant delivery. But under the mess-thetics are infectious pop songs and the wicked musings of Savage, a consistently brilliant lyricist.

He favors wordplay over melody, often foregoing the latter for rambling atonal stanzas heavy on symbolism but still grounded in reality, poeticizing real life via abstraction. When the band ventures into hardcore punk on the title track, Savage spits in double-time: “One creature I return to, one habit I neglect/ I cannot slow the pace at which I yearn, frank and unabashed I become a frozen servant.” His turn of phrase sizzles and is the linchpin of Parquet Courts’ music, fixated on topics of emotional estrangement and self-doubt. That’s why a song like “Instant Disassembly” can drift apathetically on the same riff for seven minutes, weary both in subject and sound, its wordy enigmas begging to be decoded. The approach fails only when taken to indulgent extremes like on “She’s Rolling”, which touts a two-minute harmonica solo that blares uncontrollably, and “Ducking & Dodging”, when Savage starts cramming in too many words in an incessant bout of stream-of-consciousness. Lack of restraint hurt last year’s Tally All the Things That You Broke EP, so it’s fortunate that only a few tracks are hampered here. Closing numbers “Raw Milk” and “Into the Garden” hint at significant songwriting maturity, with muted instrumentation, piano, and even a rare melodic tenor from Savage, who finally opens up his vocal range for the album’s finale.

Although Sunbathing Animal sees Parquet Courts boldly and somewhat successfully embracing the idiosyncrasies of Light Up Gold, it remains a difficult record. While the guitar work is catchy and accessible, Andrew Savage’s deadpan is an acquired taste, and you’ll find these songs more annoying than enlightening if you don’t get off on his poetic style. Consequently, Parquet Courts seem destined to be a cult band, loved by a few and passed over by many. So goes the fate of many an individualist artist in this day and age. But Parquet Courts seem totally OK with their niche in the indie rock canon based on the absurdist philosophies expounded upon throughout Sunbathing Animal. No matter how off-kilter, the sense of personality on this record transcends the tired “slacker” Pavement-core tags often slapped on the band. That alone makes it a step forward.