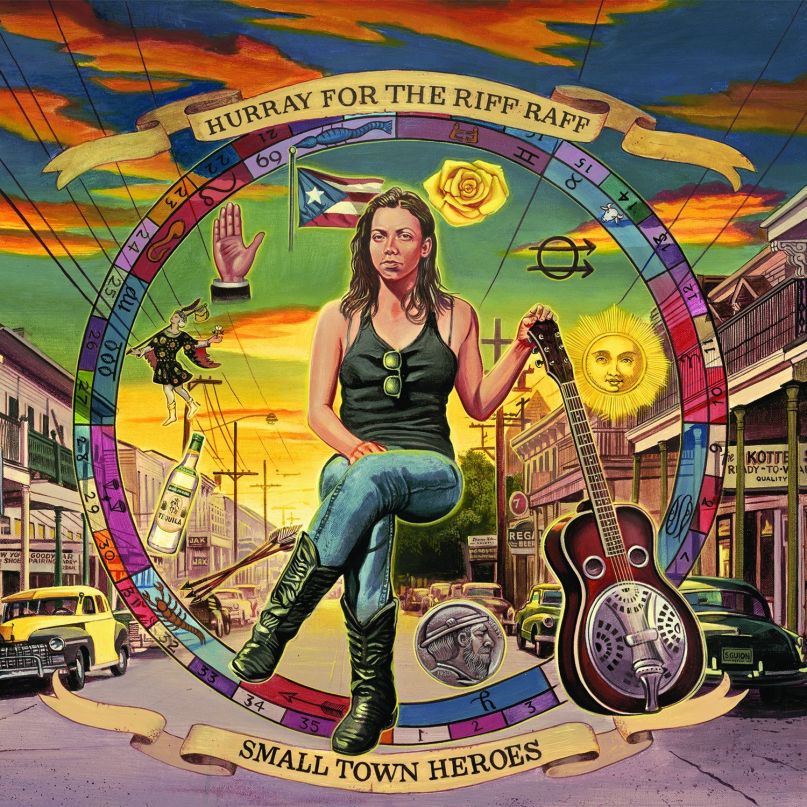 Of the many things distinguishing Hurray for the Riff Raff vocalist Alynda Lee Segarra from the hoard of suspenders-donning and banjo-strumming leads of contemporary folk music, her backstory is the most obvious. She’s a Bronx-raised Puerto Rican who left home at 17 to hop trains and roam the country, and she eventually stopped in post-Katrina New Orleans. There, she immersed herself in the city’s rich busking tradition, playing dusted-off folk songs with a deep reverence for Depression-era folk standards and golden country, eventually morphing into the Americana project Hurray for the Riff Raff. Now 27 and with a slew of homespun folk releases, including 2012’s brilliant Look Out Mama, under her belt, she returns with Small Town Heroes, backed by a full band and major label in ATO Records.

With production by Adrija Tokic (Alabama Shakes, Clear Plastic Masks), Small Town Heroes is richly rendered with Yosi Perlstein’s spirited, voluminous fiddle on songs like “End of the Line”, humble slide guitar scrapes during “Good Time Blues (An Outlaw’s Lament)”, and Appalachia-tinged banjos on opener “Blue Ridge Mountains”. Segarra’s smoky, expressive alto is the perfect vehicle for these stripped-down, old-timey arrangements. Her voice is smooth and slightly twanged, but fortunately she lacks the over-the-top Southern affectation that occasionally bogs down and often deters those curious about American folk music. As a lead vocalist, she’s naturally inviting (see the undeniable country pop of “I Know It’s Wrong (But That’s Alright)”), referencing and updating folk’s tropes. There are also nods to the past, as Segarra reimagines Jesse Fuller’s stomping “San Francisco Bay Blues” into “The New SF Blues”, a down-tempo acoustic ballad, along with “Levon’s Dream”, a tribute to The Band’s late Levon Helm.

(Nostalgia: Five Reasons 2014 Could Be A Good Year For Women In Music)

On top of her exceptional and inventive approach to these folk songs, the reason Segarra is such a needed voice in Americana is the humanism in her songwriting. While much of contemporary folk lacks the political bite of Woody Guthrie or Pete Seeger, Segarra, who identifies as queer and listened to Bikini Kill growing up, brings a progressive and empathetic mindset. In an occasionally white-washed and neutered genre (at least in 2014), that’s quite welcome. On album centerpiece and highlight “The Body Electric”, she subverts the traditional murder ballad, claiming it instead as a feminist anthem while referencing Dylan and Walt Whitman, singing, “Well, Delia’s gone but I’m settling the score.” She wonders, “Oh, and tell me what’s a man with a rifle in his hand/ Gonna do for a world that’s just dying slow?” The answer, obviously, is nothing. But Segarra, who’s made one of the most confident and fresh Americana records this year, can do a lot.

Essential Tracks: “I Know It’s Wrong (But That’s Alright)”, “The Body Electric”, and “End Of The Line”