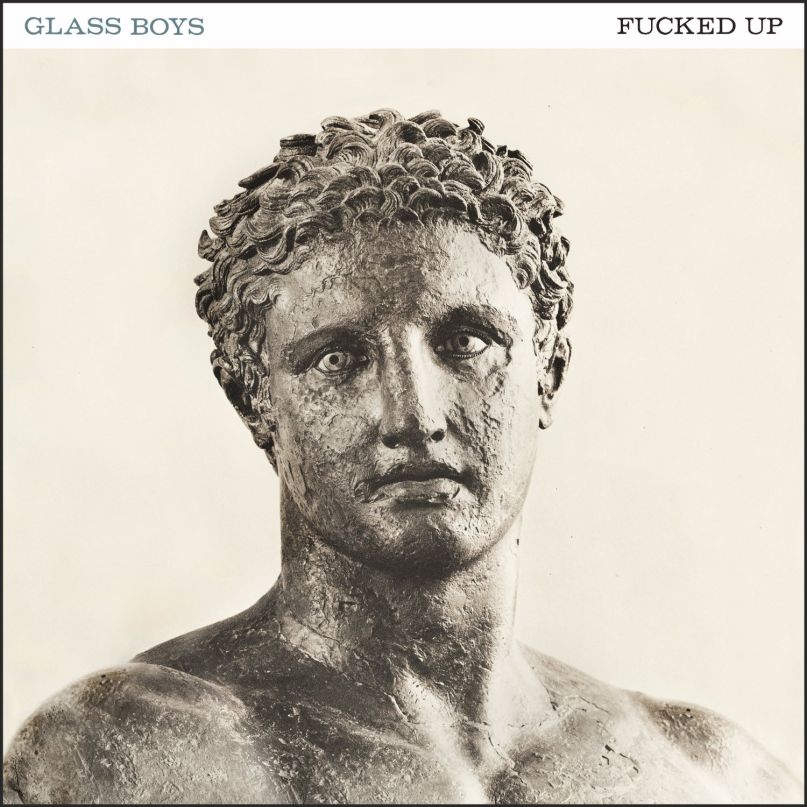 Glass Boys will be tempting to ignore, and I don’t think even Fucked Up could blame the people that don’t listen to their music. It’s abrasive, usually conceptually challenging, and often long as hell. Asking people to listen to time-consuming music they might not understand or find pleasant to the ear is … well, it’s asking a lot. But the reason you might be interested in the album is that their work to date, particularly their last couple of LPs (2008’s The Chemistry of Common Life and 2011’s David Comes to Life), has been monumentally ambitious and unexpectedly inviting despite having a prickly exterior. Like a pineapple.

That half-baked simile reminds me that Damien Abraham started smoking weed before the last album, David Comes to Life, and while that resulted in a concept double-album, Glass Boys is being billed as a more personal, emotional collection. And while the weed isn’t likely to blame, it might be behind the sideways logic used to figure that the Canadian six-piece’s brand of hardcore-for-the-masses is the best way to examine weighty concepts. For one, Abraham is hard as hell to understand, and listening to the album with the lyrics in hand doesn’t always do the music or the ideas justice. Lyrics rarely hold up to the scrutiny of their written form, and either way, multitasking divides attention and makes the album more difficult to enjoy conceptually.

But OK, it isn’t that big a deal to ask fans to try to understand what you’re saying, and Abraham does convey some humanizing, relatable thoughts. Opener “Echo Boomer” reflects somberly upon growing up, losing sight of the person you wanted to be and the things you wanted to accomplish. “Never let go of what you outgrow,” he concludes, which might not be good advice, but he means well in context. A realization from “Paper the House”, meanwhile, says a lot: “The way I make my living has driven me insane/ It’s a 21st century irony, where everything you hoped for in life ﬁlls you with anxiety.” Preach.

But the problem with close readings is that song lyrics are attempting to be poetry or to appear as poetry, but they’re often written by non-poets. “Touch Stone” starts with this: “You are who I remember/ Me when I was (just) an ember/ (Now) I’m a stone sleeping in the cinder/ You are the ﬂame dancing on the tinder.” These aren’t the worst lyrics in the world, but as poetry, it just doesn’t make the cut. No matter how fancy of a font you use on the lyrics sheet, all the curling tips of all the letters in all the alphabets couldn’t make forced rhymes seem natural.

Abraham’s crime as a writer is his heavy-handedness, which makes sense because we’ve heard the guy sing. He doesn’t care if he goes a mile over the top. He’s coming from an honest place, and that ultimately outweighs any lack of elegance or over-eager clumsiness that can, at times, take away from the sentiment. But to dwell on this is unfair and not explicitly requested by the band. Musically, Fucked Up is further pushing their sonic palette, with success across the board. The drums, which are being highlighted by a drum-only edition of the album that will be released with Glass Boys as a bonus, are worthy of attention and praise, which is so rarely the case that it is kind of hard to grasp. Jonah Falco is given the chance to kick-off some songs with these arena-worthy percussive statements on “Echo Boomer” and “Warm Change”, but even more impressive is how often he is able to disappear into the song while, once attention is given, playing a complex drum part that should distract. Being able to do these two things at once is where the art exists, and Falco is worthy of the label “artist” here.

On “Sun Glass”, the band is able to display just how intricately beautiful their three-guitar assault can be, which works as a foil to Abraham’s Cookie Monster growls, and throughout the album, their guitar team can blend shiny, piercing guitar leads with flexing, fist-raising riffs, like if AC/DC had been listening to Deerhunter. And despite the movement away from the anthemic singles that David Comes to Life had in spades, the J Mascis-infused “Led by Hand” and highlight “The Art of Patrons” (which also sounds like Mascis is on it, though the album notes say otherwise), in addition to the album’s bookends, all give enough in terms of hooks and dramatic tension to stand out from an otherwise strong set.

That’s a lot to like, and it’s more than enough for Fucked Up to continue their reign as the hardcore crossover act of choice for fans of punk, or indie, or both. But, in terms of more emotional resonance, it is difficult to call that aspect of the album a complete success, as the knowledge that Abraham is trying to share more is probably more affecting than the actual sharing. But maybe there are people who will see the Macbeth reference on “The Great Divide” as an invitation, but these cliched attempts at intellectual words seem far away from some of the best, emotionally direct music that is coming from contemporaries in 2014. Still, it is rare to say that the ends justify the means, but here it does. Even if the method of delivery is not the most effective, it’s a positive thing for both artist and listener to be pushing further, trying harder, and exploring uncomfortable, new terrain. Ignoring that would be a mistake.

Essential Tracks: “The Art of Patrons”, “Paper the House”, and “Echo Boomer”