When was the last time a book inspired you to listen? 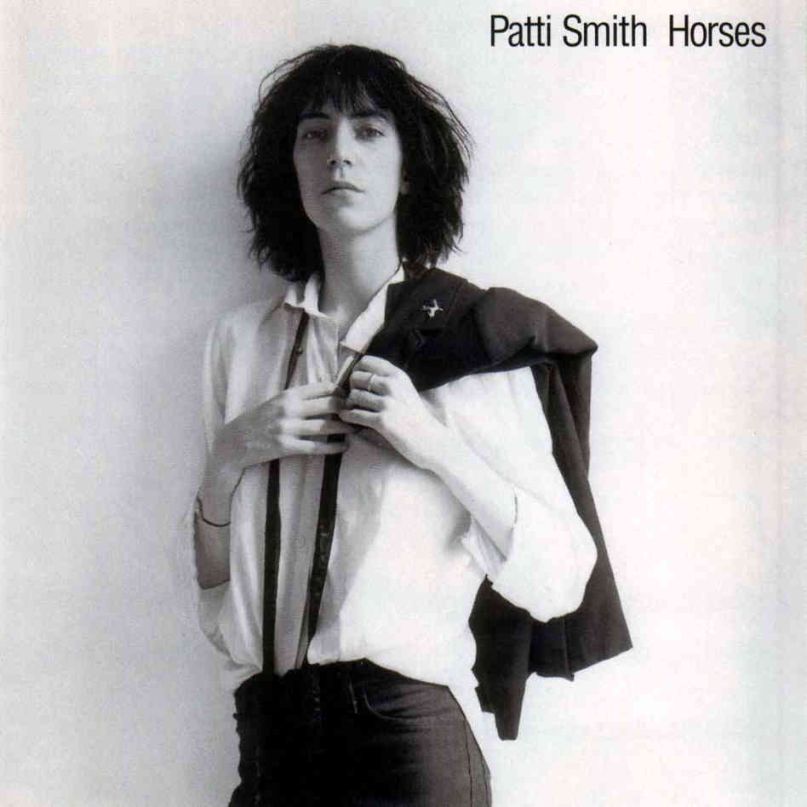 At some point or another, all of us have plead musical ignorance. No matter how hard we try, there’s always one album that slips past our eardrums, that embarrassing void inside our personal music library. Even writers here at Consequence of Sound have missed out on legendary albums loved the world over. But what good would we be to not correct that mistake? It’s a feature we call, Wait, You’ve Never Heard.

I jumped at the chance to read Patti Smith’s Just Kids for the most recent iteration of the CoS Book Club. I’ve heard excellent things about the 2010 memoir of Smith’s relationship with photographer Robert Mapplethorpe for several years now, but behind my enthusiasm was an embarrassing truth: I’d never listened to any of her work.

Compounding my embarrassment is the fact that I’ve been aware of Smith herself for quite some time. I’ve even taken her style as inspiration for my own self-presentation; I love her bold features and her fearless approach to dressing. But I hadn’t yet sought out the music behind the icon.

Right from the beginning, I adored Just Kids. I was charmed from the first pages by the hazy romance of nostalgia filtered through long, poetic sentences. Smith’s writing reminds me of one of my great favorites, Joan Didion, and sent me around the house humming “Chelsea Hotel #2” for weeks. I needed more Patti Smith magic in my life, stat, so I turned to her classic album from 1975, Horses, for an inaugural listen.

But my first attempts at the record were failures: My local record store had just sold their last copy of the reissued vinyl. Under deadline, I turned to YouTube to get started. “Birdland” came up first, and not knowing any better, I hit play.

By now, I’ve acquired the vinyl, and it’s no coincidence that I’ve also come around to “Birdland”. It’s exactly the type of freewheeling song I have a hard time sitting through in digital format, compounded by the fact that at the time, I was trying desperately to grade my students’ final essays. I got about seven minutes in before I shut it off that first time, unsettled by the jangling cacophony. How did a woman who wrote such beautiful sentences produce so much noise?

Record in hand (and essays put to bed), I know the answer now: Horses is both the beauty and the chaos, the swirl of joyful noise that encompassed Smith’s life at that time. It was gratifying on “Gloria” to hear Smith give life to the poetry she discusses writing in Kids, to catch the little family or literary references she discusses in the book. Most people who have read her memoir are probably longtime fans, but I think I got a unique take on it: Experiencing Kids first and Horses second, I felt more like someone who knew Smith before she became famous and later heard the record, like when a friend’s band actually turns out to be really good. And when her poetry melts in with Van Morrison’s lyrics, the combination is brain-meltingly delicious. I want to go back in time and start every mix I’ve ever made with “Gloria”.

“Birdland” is still long and tangly after that, but it starts to make more sense in its proper context. I’m never going to be crazy about it or “Redondo Beach”, though; I appreciate their ideas, but neither track is really my style. But that B-side—oh man. I fell hard first for “Kimberly”. The chorus rambled around my head for days, and I found myself neglecting to flip the record just so I could start with that song again. Lyrics are huge to me, and these are equally as picturesque in song as in print: “Oh baby, I remember when you were born/ It was dawn and the storm settled in my belly/ And I rolled in the grass and I spit out the gas/ And I lit a match and the void went flash.” There are few musicians in the world who can be called true poets in the classical sense, but Smith is undoubtedly among them.

I understand now why they call Smith the godmother of punk rock; I see little hints of other music I’ve long loved all throughout Horses. The astonishing part is that Smith’s music encompasses—and must have helped birth—all of those ideas inside a single album. Elements of her poetry are reflected in modern thinking-girl’s acts like Lady Lamb the Beekeeper and Waxahatchee. Her cover/mash-up concepts, like on “Gloria” and “Land”, must have inspired everyone from Me First and the Gimme Gimmes to Girl Talk. The spoken section at the beginning of “Land” and the untamed, gritty poetry of real life foretell the Hold Steady’s storytelling (and though I’m a big fan of the latter band, I’ve never heard anything quite like “Land”. It’s going to take me at least another month to get my head all the way around that song). The album is so dense conceptually, so transformative, that it’s hard to imagine how people must have reacted the first few times it was played.

The genius twist of Horses is that conclusion: Lest you come away with the impression that Smith is only about rock ‘n’ roll guitar and wild poetry, she ends on “Elegie”. The instrumentation is haunting and the lyrics are plenty mournful, but Smith’s vocals are the star here, impossibly, startlingly beautiful as she belts one out for friends gone by. My god, no wonder she’s still a star. She can do everything—and she does it all on her debut record.

In a delightful surprise, it turns out I’ll get to cap off my year of Patti Smith with a live performance at Chicago’s Riot Fest. It took me some years to get here, but count me among her many fans.