by Dan Pfleegor and Amanda Koellner 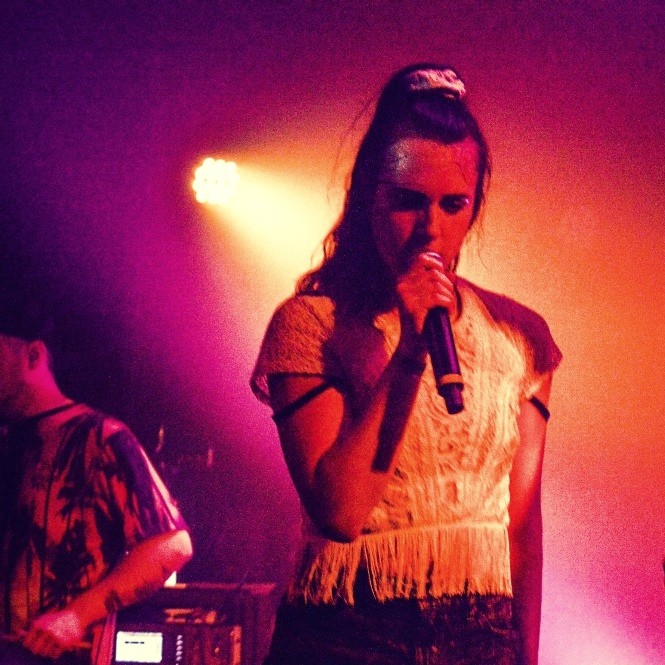 Recent CoSign MØ gamboled out at Chicago’s Lincoln Hall Wednesday evening ready to dance. The Danish singer — whose name English speakers can best emulate as Meu — is experiencing a meteoric stateside rise, in part due to her strong showing at this year’s SXSW and CMJ, the strength of No Mythologies to Follow, and tunes splashing across all sorts of Spotify playlists. Her unique take on glamorized dance and wintry, glitched-up hip-hop is completely infectious, so it’s not hard to see why her stock as a writer and performer is spiking. Despite all the attention and expectations though, MØ seemed to be in a completely comfortable place, owning both the stage and the attention of the crowd within seconds, as she sashayed and bounced to set opener “Fire Rides”.

No Mythologies producer Ronni Vindahl pitched in on guitar, bringing equal parts Stevie Ray Vaughan and David Bowie to the dancing strings of “Maiden” while MØ mourned her black heart and admitted to selfish carnal desires. (Fun fact: The word “MØ” is the old Norse word for “virgin” or “maiden”.) Vindahl’s steadfast presence on center stage also freed MØ to explore the venue on her own terms. Aside from crowd-surfing and perching high upon security fences, the adventurous singer made surprise appearances atop the second floor’s VIP section — “Hey, I’m up here!” — while also taking a moment to barhop, literally, by gyrating next to handles of booze and taps of beer, spinning her scrunchy held ponytail like a viking mace.

It was an evening of high energy and big smiles, with only a few somber moments. The heartbreaking chorus of “Never Wanna Know” found MØ channeling Lana Del Rey and reminiscing on the heartache she’s caused in a world where things fall apart — “All of a sudden I was brain dead and rotten/ The thoughts of you and I/ and I wanted to keep by you.” But this night was always geared toward dancing in a room full of friends. After all, a set featuring “Pilgrim”, “Red in the Grey”, and the big band march of Diplo kissed “XXX 88 ft.” was simply too engaging to be ignored or misunderstood. Even the most self aware concertgoers were waving their limbs like folks being chased by bees.

The singer trucked through about a dozen choice cuts in an hour — a significant portion of her still fledgling catalog — before exiting stage right for an obligatory pause, and returning with a two-song encore. You can imagine the palpable swell of excitement as the band launched into the opening chords of the Spice Girls’ cover “Say You’ll Be There”. MØ then wrapped up the night with an ovation-worthy rendition of lead single “Don’t Wanna Dance”. Her tour continues with a number of dates in the Pacific Northwest.