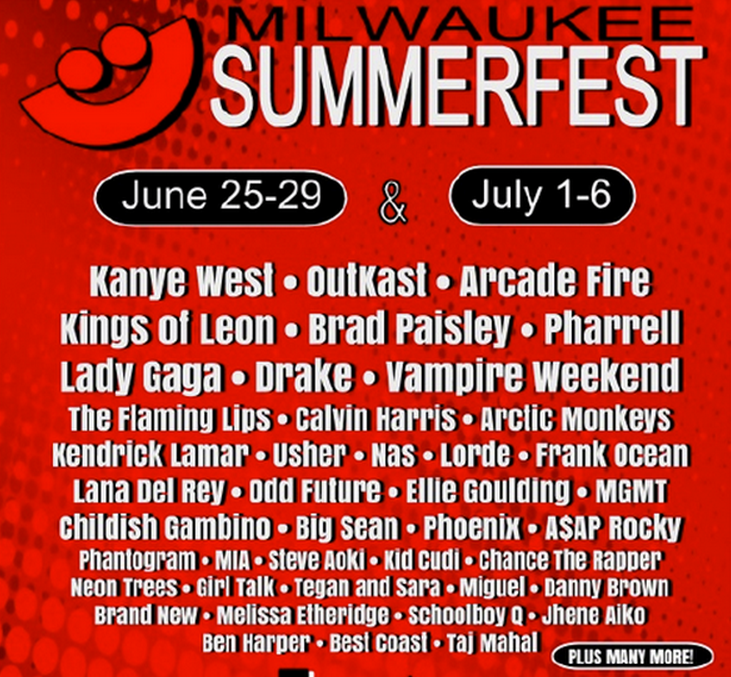 Moneyball is a book and movie recounting the team-building strategies of Oakland Athletics general manager Billy Beane. (You know the one; Jonah Hill became “The Academy Award-Nominated Jonah Hill” because of it.) In short, Beane and his associates thought it wiser to go for less expensive baseball players who brought more value to the team than a big-budget power hitter might. Sort of makes you wonder: What would happen if you applied the same focus on value to music festivals?

One plucky young blogger named Daniel Garcia decided to do just that. Using priceonomics’ recently-revealed data about approximate booking costs for popular music acts, Garcia turned himself into the hypothetical booking agent for Milwaukee’s Summerfest, an 11-day festival featuring over 800 bands and rightfully billed as “The World’s Biggest Music Festival”. In his hypothetical role, Garcia set out to turn it into the world’s best music festival.

(Ed. Note: As many have pointed out,  the numbers listed from priceonomics aren’t necessary reflective of a band’s normal booking rate. Several numbers are inflated as they reflect the cost to book a band for a private event, such as a college concert, rather than a typical headlining show or festival.)

While keeping big names like Arctic Monkeys, Lady Gaga, Usher, Nas, and OutKast (“Afterall, if I want my Summerfest to be 2014’s best music festival, you have to be a stop on Outkast’s festival tour”), Garcia freed up around $3.6 million dollars (about $1 million of which was Dave Matthews Band) to build the festival his way.

If you’re telling me you can trade the above with Timeflies, Five Finger Death Punch, Kansas, Switchfoot, and The Fray and bring in Kanye West, Lorde, Drake, Vampire Weekend, Kings of Leon, MIA, Phoenix, and Arcade Fire, I’m all in. Other acts Garcia managed to add include Odd Future, Lana Del Rey, Frank Ocean, Ellie Goulding, Steve Aoki, and The Flaming Lips. Did Garcia just become the music festival equivalent of Peter Brand? In his post, Garcia notes that Summerfest is run by a non-profit that probably enjoys the festival’s diverse lineup, but if his math would hold in the real world, it’s hard to argue that he’d have put together one hell of a bill. Check out the full breakdown of his moves below.