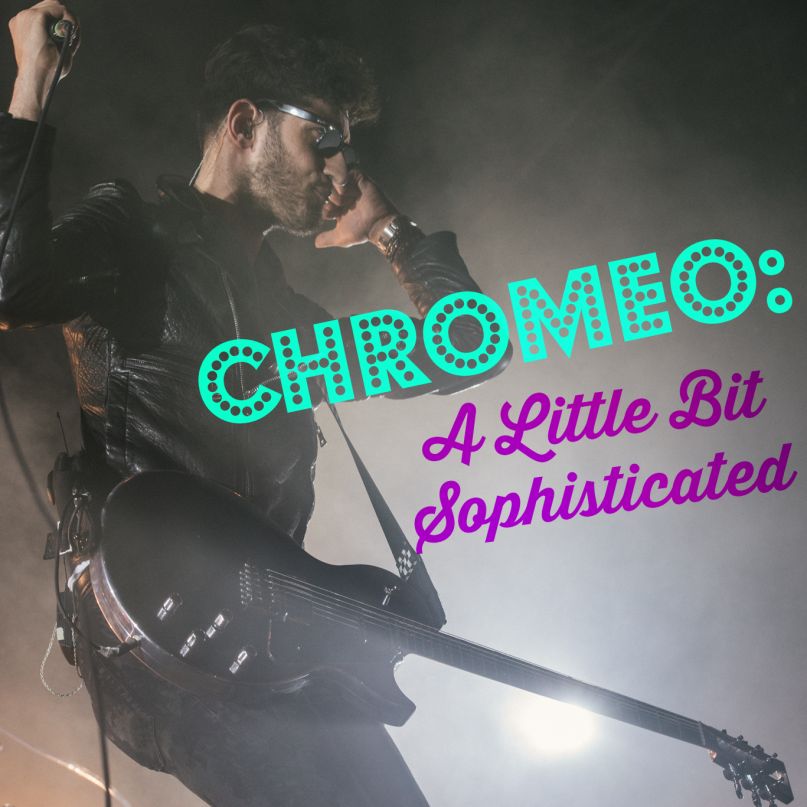 David Macklovitch doesn’t have time for a side project, but were he to start one, he says, it would totally sound like that ‘90s band. You know the one—they sang that song that goes, “Closing time…”

The name of the group doesn’t come to him straight away, and when he hears the answer—Semisonic, but of course—the Chromeo singer and guitarist gets even chattier and more engaging than he’s been for the first few minutes of our phone interview.

The conversation has turned from White Women—Chromeo’s just-released fourth and arguably best album—to the concept of nostalgia, and Macklovitch has a theory about why certain bygone sounds come around again. “It’s always cool to reference stuff people haven’t thought about yet,” he says. “There’s this cycle. I can’t wait until people reference Smash Mouth.”

While we’ve yet to be inundated with a bunch of “All Star” updates, it may only be a matter of time. These days, the ‘90s are where it’s at. All the young rockers want to be Kurts and Courtneys, while the artsier crooners and beatmakers have it bad for Aaliyah, Jodeci, Shai, R. Kelly, and the day’s other R&B stars.

Macklovitch gets the rediscovery thing. When he and Patrick “P-Thugg” Gemayel formed Chromeo in 2002, no one was thinking about early-‘80s electro-funk—the sound they endeavored to dig up and get indie kids dancing to. While it would have been easy to dismiss the irreverent Canadians as hipster wiseasses making retro booty music purely for laughs, theirs was a genuine affection for Rick James, Cameo, early Prince, Klymaxx, and even Hall & Oates.

A tune like “Bonafied Lovin’ (Tough Guys)”, from 2007’s excellent Fancy Footwork, is ridiculous and ri-dic-ulous—a tongue-in-cheek lover-man jam that’s kind of absurd and yet absolutely 100 percent certain to wreck a dance floor.

“We came into this with a very tough sell: How to make ‘80s cocaine Jheri curl white-leather-pants funk acceptable the same way people accept Joy Division and Depeche Mode,” Macklovitch says. “That’s a tough sell, especially coming from two goofballs like us. But we work really hard. We work really diligently, and the songs spread by themselves and speak for themselves.”

Indeed, they do. Back in 2008, when they were nowhere near as popular as they are today, Chromeo could play a festival like New York City’s All Points West at 2:30 p.m. and make a hot, dusty field feel like the swankiest nightclub you’ve ever been too. These days, they’re selling out venues across the country, and their recent Coachella appearance still has people buzzing.

As always, much of this success is due to the music. With White Women, Macklovitch and Gemayel have upped their songwriting and production games considerably and turned in a set of tunes that reveal genuine evolution without sacrificing that faux-lothario cheekiness fans have come to expect.

For every silly “Sexy Socialite”, there’s a “Lost on the Way Home”, a sweet slow jam featuring guest vocals from Solange. Macklovitch cites the Weeknd and the Top Gun soundtrack as his main inspirations for the song, and if pulling off a PBR&B update of “Take My Breath Away” isn’t proof of artistic growth, nothing is.

“With us, it’s always plural,” Macklovitch says. “I think this is maybe our most plural record. On one hand, we wanted to bring back the fun, effusive vibe of Fancy Footwork—everybody listening to songs on MySpace and dancing. On the other hand, we wanted to go a little mature, a little bit sophisticated.”

Depending on how you look at it, Chromeo may have also gotten lucky with “Get Lucky”, since Daft Punk’s ubiquitous 2012 disco-funk anthem harks back to the same Hai Karate-scented era they’ve been mining all along. Thanks to a couple of French robots, the world is finally ready to dance to this stuff, and in that sense, Macklovitch might feel vindicated, like he and Gemayel really were on to something.

He might also be a little pissed off, though he’s far too big a Daft Punk fan to begrudge the French duo for making a jillion bucks on a sound he insists is only superficially similar to Chromeo’s.

“Those guys are legendary,” Macklovitch says. “It’s really flattering that people bring them up while talking about us.”

“If anything, I wish I could have drawn more inspiration from their [new] stuff,” he adds. “Usually, their stuff really inspires us. Especially Discovery, which to me is the best electronic music album ever made. I always call it the Thriller of France. On [Random Access Memories], it’s so live—it’s all live instruments. That, to us, is very different. It’s cool, but it’s very different from what we do.”

Ultimately, the group Macklovitch turns to when describing the new album isn’t Daft Punk but the Red Hot Chili Peppers. His goal with White Women, he says, was to create Chromeo’s Blood Sugar Sex Magic, the 1991 album on which the Peppers “crystallized” all of the funk and rock influences they’d been messing with for years.

“All the elements—they just had an extra sheen, to where you could start listening to the Red Hot Chili Peppers with Blood Sugar, and you had everything in there already,” he says. “I wanted White Women to be that for us, in that it’s like the sum of everything we’ve done. It’s our most accomplished work, but from there, you just get a new shot at another 10 years.

Or as Semisonic put it: “Every new beginning comes from some other beginning’s end.”