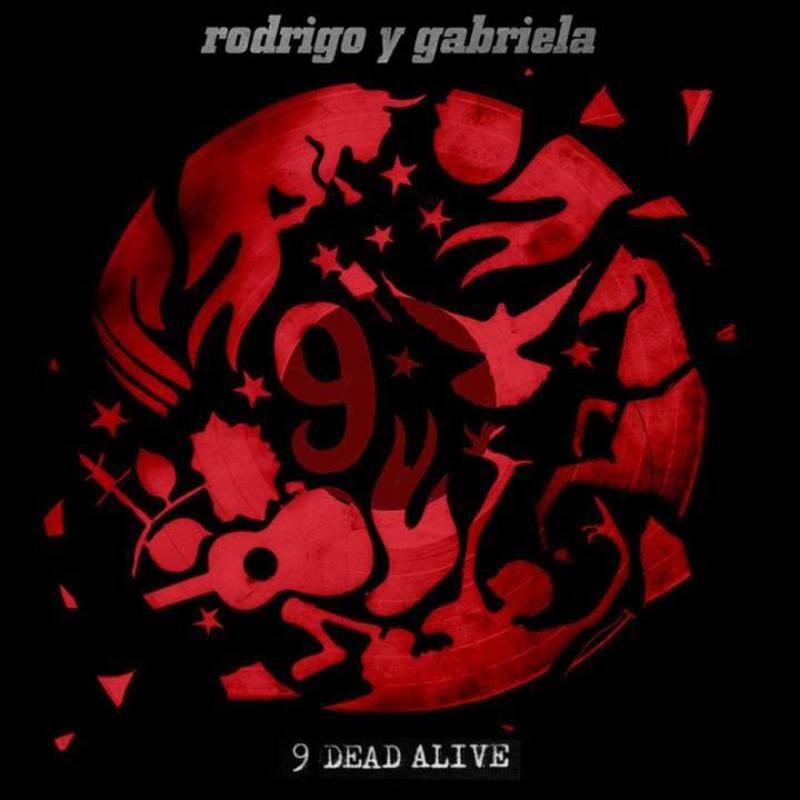 On 9 Dead Alive, Rodrigo y Gabriela waste precious little time before letting the listener know they’ve returned to the formula that made them stars. The first physics-defying guitar flourish bursts into view less than 15 seconds into opening track “The Soundmaker”. Over a stomping, swaggering rock beat, the dexterous guitarists emphasize a melodic turn by melding rhythm and lead into a furious riff that manages to be both manic and skillful. Such is the inviting dynamic of the pair. While their technical chops are impressive, what separates them from other aspiring guitar virtuosos is that they aren’t afraid to get sloppily demonstrative to make a point. Amid the precise fingerpicking, they never allow rigidity of form or adherence to a specific style to limit their possibilities. They mix and match at will, and, most importantly, always remember to make the music fun.

Rodrigo y Gabriela’s origin story is a classic “meet-cute”: boy meets girl, boy and girl start metal band in Mexico, boy and girl move to Dublin to become street performers, yadda yadda yadda, they become international guitar stars. The details of this rise are the subject of a documentary currently making the festival rounds, coinciding with the release and subsequent tour for 9 Dead Alive.

Calling Rodrigo y Gabriela’s style “flamenco” is not quite accurate. On their first major studio album, 2006’s self-titled Rodrigo y Gabriela, the flamenco influences were more pronounced. Even at this early stage, what set the duo apart was their inclination to incorporate rock, pop, and metal styles into their sound. The pair use the trappings of flamenco like a toreador uses his cape, beckoning, distracting and hypnotizing, while the beating heart of the band remains unscathed. For example, the song “Torito” has the elaborate melodic line and fiercely percussive rhythm guitar one expects from Rodrigo y Gabriela. But at the song’s heart, and elaborated throughout, is an ominous metal progression that, with electric guitar and a full band, could be the core of a Mastodon track.

Rodrigo y Gabriela have never been shy about openly communicating their influences. Rodrigo y Gabriela included covers of Led Zeppelin and Metallica, and the studio follow-up, 11:11, was thematically constructed around songs written to or about musicians who influenced them. After over a decade as a group, 9 Dead Alive demonstrates how the band has grown increasingly comfortable composing and performing work that more than ever sounds like Rodrigo y Gabriela (and no one else). They are boldly strumming their way into unknown territory and leaving behind songs that defy genre categorization.

Listening to 9 Dead Alive feels like being a fly on the wall. The duo performs each track live, there are little to no production tricks, and the occasional quiet studio banter further creates the illusion of an intimate session played for one.

For a duo on acoustic guitar, Rodrigo y Gabriela create a remarkably diverse set of sounds and moods. On a basic level, every song is the same: Rodrigo takes the lead with inventive and precise melody, while the exhausting physicality of Gabriela’s rhythm work incorporates slapping the guitar body, twisting nylon strings, and strumming with alarming ferocity. Despite the lead/rhythm assignments, one never takes a backseat to the other. Their guitars are in constant communication, pushing and pulling, calling and responding. The intricate guitar work on both ends rewards close listening, making it easy to find surprises and inside jokes buried within the playing of each.

Rodrigo y Gabriela’s compositions aren’t simply platforms for demonstrating their chops. They take time and care for composing passages that tell a story. “Sunday Neurosis” opens with samples of thinkers ruminating on the existence of God. Paired with the song title, the samples gently guide the listener toward the duo’s reflective state. “Megalopolis” offers the listener another pensive respite from the ferocity of the other tracks. It’s gentle and soothing, serving as a sort of balm for the scorching guitar riffs elsewhere and demonstrates the other end of their spectrum.

Rodrigo is at his best on “Fram”, taking the listener on a full tour of his chops over the course of four and a half minutes. A softly counted “uno, dos, tres” marks the beginning of a slow passage that builds patiently to an eruptive conclusion, Rodgrigo’s fingers scattering wildly across the frets, bending nylon, wood, and seemingly time in equal turns. Gabriela stays mostly in the background, keeping a steady beat and adding occasional subtle emphasis.

Fans of Rodrigo y Gabriela’s early albums will find much to enjoy on 9 Dead Alive. The duo has continued their journey toward creating a unique sound that stands astride the disparate worlds of flamenco, tango, rock, metal, and countless other genres. What ties everything into a unified whole are their remarkable guitar chops and their outright refusal to rest on their laurels.