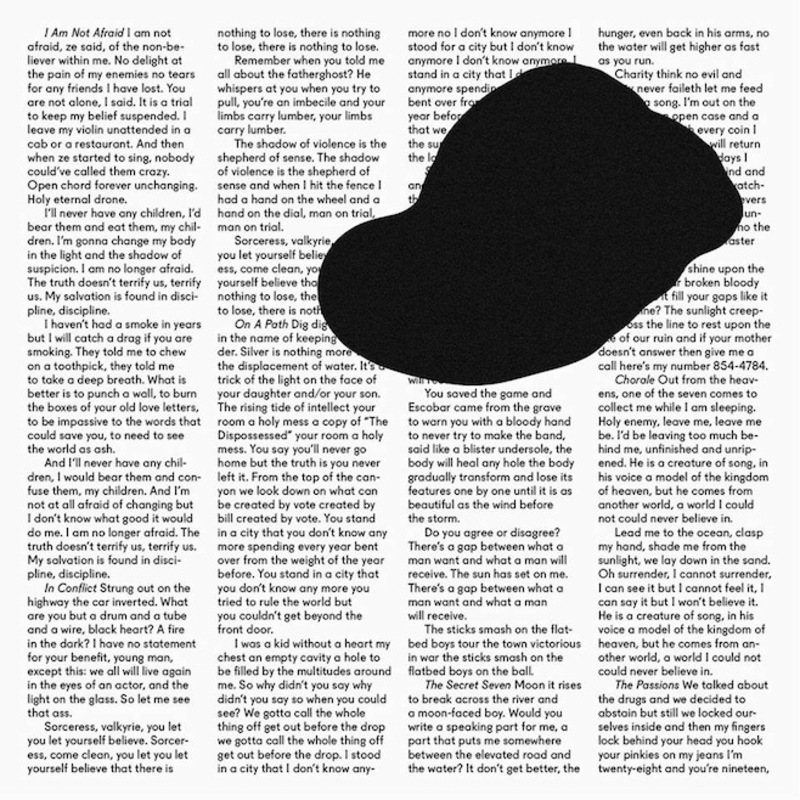 How do you talk yourself down from high fantasy? How do you decide to exit a world in which peasant farmers duel cockatrices in favor of one where the minutia of life takes hold? Owen Pallett used to veil his songs in characters and scenarios imported from an alternate universe’s folklore. On In Conflict, for the first time, he’s singing directly about himself.

The second album under his birth name after 2010’s Heartland, In Conflict stars a plain English Pallett, a protagonist stuck navigating the labyrinths in his own head. He doesn’t indulge metaphors like “my blood is a red-winged bird” (from Heartland’s “Midnight Directives”) anymore. He does list strategies he’s been taught to ward off urges to smoke. But these songs, 11 of them, plus two instrumental segues, aren’t bare-bones confessionals whittled of their enigma. The setting is the everyday; the scale is still epic. Turns out, when you take one guy’s fears and hopes and neuroses and splay them across a range of Middle Earth mountains, you get some great songs.

Pallett just joined his friend Will Butler on scoring the Spike Jonze film Her, and oddly enough, In Conflict works a little like the movie. Wide landscape shots typically serve big, historical dramas, fiery action flicks, or ambitious fantasies. Jonze worked them into an intimate film about one man who wanted to be loved. His camera streaked across a future Los Angeles, absorbing scores of people who had nothing to do with Theodore Twombly. The scale of the script was small. The scale of the cinematography was not. It’s the same with In Conflict, in which the orchestrations vastly outreach Pallett’s lyrics. Like Her, it works.

Despite the bloody end to its narrative, I think of Heartland as a triumphant album, the kind whose songs you sing along to when you feel like punching air. The refrain of “I’m never gonna give it to you!” on that album’s “Lewis Takes Off His Shirt” cycles like a mantra that fits any brand of contrarianism. In Conflict, by contrast, is a downer. Pallett appears, 34 years old and hopelessly mortal, staring down the second act of a life. “I’ll never have any children,” he mourns on opener “I Am Not Afraid”. “I would bear them and confuse them, my children.”

He still sings in that trained excellence, crisp diction edging his words, and he still composes his lyrics with antiquated flair. The album sounds ornate, steeped in horn and piano and glitch. Of everyone grouped under “baroque pop,” Pallett might deserve the label most. While he’s generous (as always) with the strings, In Conflict leans a little more heavily on eerie computerized texture and straight-up beats. Blotches of cheap synth balloon from nowhere on the title track, while techno arpeggios twine with plucks of Pallett’s trusty violin on the kicker “Song for Five & Six”. In the distance, a slab of fake strings bends out of tune with his voice as he sings, “There’s a gap between what a man wants and what a man will receive.”

It’s true: The longer you stick around, the more you realize how out of whack the world is with your most innocent desires. The years tick on and fantasies give way to lived reality. It can be a good thing — you get better at navigating your environment — and it can be really, truly frustrating. “The Passions” sees its protagonist flounder in a moment of awkward intimacy, fucking someone he can’t connect to while The Smiths play in the background. “It don’t get better,” Pallett sings in the soaring chorus of “The Secret Seven”. Is he deliberately contradicting the likes of Dan Savage, who made a movement out of convincing queer kids that life isn’t always going to be as bad as it is in high school? “The water will get higher as fast as you run.”

In Conflict is ominous, gloomy, and marked with some of the most playful arrangements Pallett’s laid to date. The depth of field in this album alone is a pleasure — just listen to how the beat seems to be ringing out from four or five different distances on “Chorale”, how mechanical chirps orbit the listener like errant drones on “The Sky Behind the Flag”. Listen to how Pallett’s always in the middle of the chaos, pressed against your ear while the music pulses and sways around him. He is fixed, helpless, in the world he’s engineered for himself.

This is a world where the stakes are as high as any fantasy. Instead of a personified evil, depression, anxiety, and dysphoria lurk at the corners, waiting for any chance to resume destruction. Instead of a hero’s journey, there’s the struggle to accept life as irreconcilably broken. And, instead of a hero, we have Pallett, tired, resigned, but bravely fighting off the impulses to do drugs, to self-loathe, to give up. They loom high as any monsters, and the only weapons he’s got are his artistry and his compassion. It’s a good thing he knows how to use them.

Essential Tracks: “I Am Not Afraid”, “Song for Five & Six”, and “The Sky Behind the Flag”

Previous Story
Album Review: Dave Harrington – Before This There Was One Heart But a Thousand Thoughts
Next Story
Watch: Will Ferrell and Chad Smith’s drum-off, the most important moment in music history
Popular
More Stories
[fu-upload-form form_layout="media" title="Submit Your Photo"][input type="hidden" name="ugc" value="1"][/fu-upload-form]