La Sera – Hour of the Dawn 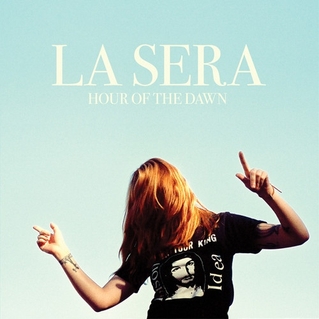 It might feel a bit cliché to call an album a “spring record,” but the distinction would be impossible to ignore on Katy Goodman’s third LP under the La Sera moniker, Hour of the Dawn. Absolutely everything here screams rebirth, from the blissful album art to the fact that the ex-Vivian Girl is backed by a brand-new band. On the opening track, she declares, “I won’t live like this forever, losing to the dark,” and she spends the next 30 minutes living up to that oath.

In a press release, Goodman stated, “I wanted the new record to sound like Lesley Gore fronting Black Flag,” and that winds up being a fairly accurate description. More polished than any of her work with Vivian Girls (and most of her last two La Sera records), Hour of the Dawn is full of candied punk gems. Its consistency is often both Goodman’s best friend and worst enemy; strengths like “Running Wild”, “All My Love Is for You”, and “Summer of Love”, while rewarding, are difficult to distinguish from one another even upon repeated listening.

It’s the title track that proves to be the album’s centerpiece, and it’s a revelation. Guitarist Tod Wisenbaker’s fretwork sails into the wide blue yonder without ever sounding aimless and lands on brighter shores in a climatic eruption of power pop perfection. Goodman flexes her sense of humor on the amazingly titled “10 Headed Goat Wizard”, which flaunts a riff that sounds pickpocketed from Johnny Marr and threatens to send sunbeams shooting out of your speakers.

Ultimately, Hour of the Dawn is a relentlessly happy record, which makes it hard not to enjoy, and with her deft song-crafting, Goodman proves that not all good art has to come from pain.

Essential Tracks: “Losing to the Dark”, “Hour of the Dawn”, and “10 Headed Goat Wizard”