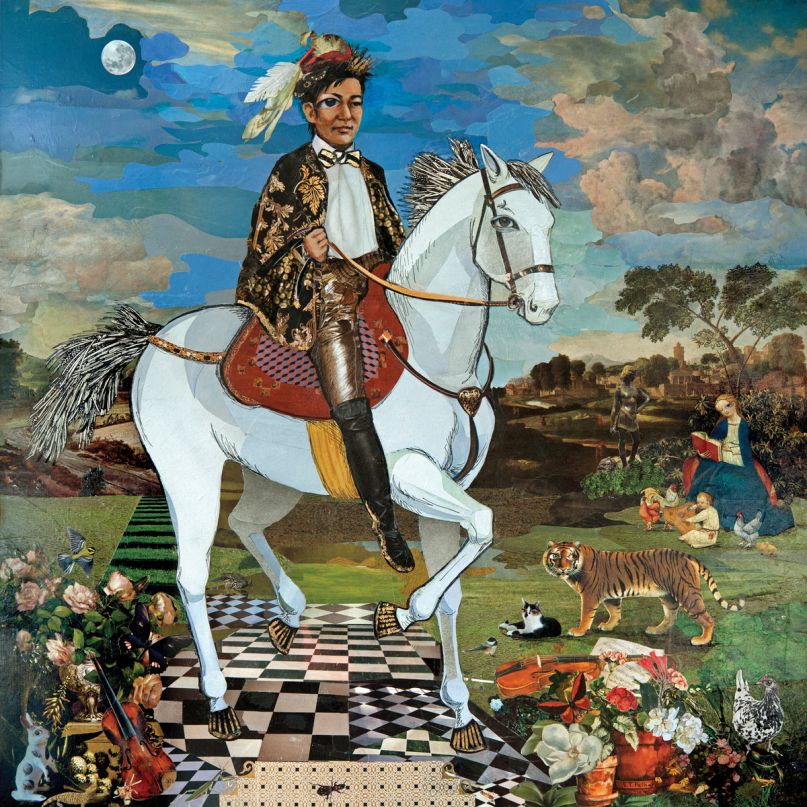 Over the course of two albums, songwriter/violinist/composer Kaoru Ishibashi has proven he isn’t afraid of big ideas. For his sophomore effort, the man behind the Kishi Bashi name could have remained content performing the same kind of breezy chamber pop that made his debut, 151a, a surprise hit in 2012. Instead of reinforcing his laurels, he pushes new boundaries on Lighght, seeking new sounds, but unfortunately missing more often than he hits.

Opening instrumental interlude “Debut – Impromptu” — which segues into “Philosophize in It! Chemicalize with It!” — shares its DNA with 151a single “Bright Whites”. Both songs are pre-certified for a Wes Anderson montage, the kind of cheery, saccharine uber-pop that, let’s say, a corporation desperate to be trendy would use in a commercial.

That’s not as damning an indictment as it might seem on the surface. It is difficult (and dangerous) to criticize an artist for too clearly representing a zeitgeist (or the popular idea of the zeitgeist). Ishibashi’s impressive violin chops were honed and proven during his years as a touring musician, and his voice is clear, high, and beautiful. “Philosophize in It! Chemicalize with It!” is an earworm, likely to delight (or haunt) a listener for days. And just as “Bright Whites” is the pop single foundation of 151a, “Philosophize in It! Chemicalize with It!” offers a pleasing entry point before Lighght veers off into increasingly perplexing and oftentimes difficult territory.

(Watch: Off the Avenue – Kishi Bashi)

151a was composed during years of downtime on tour, as Ishibashi was billed alongside acts like Sondre Lerche, of Montreal, and Regina Spektor. From this perspective, Lighght is Kishi Bashi’s first “true” album, written at a time specifically focused on the Kishi Bashi project.

A highlight of Lighght, “The Ballad of Mr. Steak” owes more than a passing nod to the Jeff Lynne-penned “Mr. Blue Sky”. Over a driving disco-inspired synth and drumming, “Mr. Steak” tells the story of the lengths taken by a man in love. It has a captivating, sweet melody, and anyone waiting to hear Ishibashi use his tenor to light up the words “Booty, booty, shakey, shake” over a disco break will not be disappointed.

“Carry on Phenomenon” sticks with the ELO vibe, offering a catchy chorus that swings confidently in the pocket, as a surprisingly funky bass line drives the melody. But after this strong three-song opening, Lighght devolves into some puzzling, esoteric post-prog navel-gazing.

“Bittersweet Genesis for Him AND Her” is essentially a spoken-word poem over picked guitar and swirling violin. It is relatively pleasant despite invoking the most pretentious aspects of The Moody Blues’ Days of Future Passed (not a compliment). “Q&A” is a straight Beatles-era McCartney homage, sweet but unoriginal.

The four-song segment that closes the album shows Ishibashi’s composing skills at their most self-indulgent. “Hahaha Pt. 2” devolves into Pink Floyd-aping psychedelic nonsense. The seven-minute closer “In Fantasia” is interminably long and glacially paced: a whole lot of sound, very little fury, and signifying nothing.

151a had its share of exposition-heavy, prog-inspired tunes, like “Atticus, in the Desert”. The difference is that the aforementioned song was built around surprising tempo changes and catchy melodies that help forgive some of the compositional grandiosity. Lighght is heavy on the latter and light on the former.

Ishibashi is an inventive composer with a lovely voice and a knack for memorable hooks. While Lighght has its highlights, there is simply too much questionable fluff surrounding the good ideas.

Essential Tracks: “Philosophize in It! Chemicalize with It!”, “The Ballad of Mr. Steak”