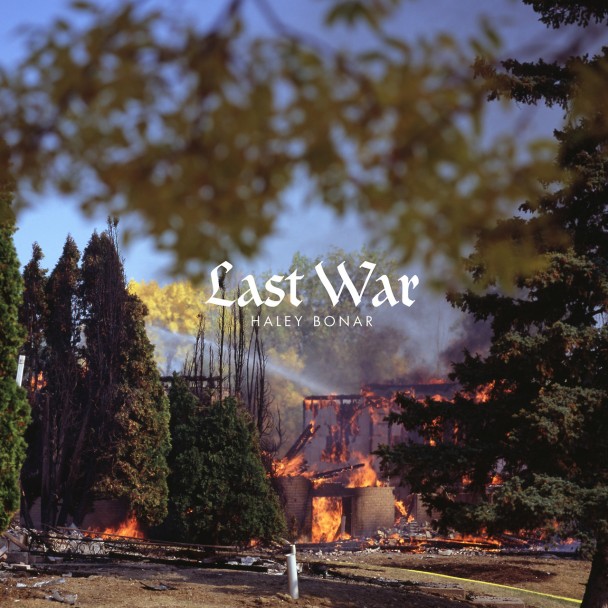 In a recording career that stretches back to 2001, Haley Bonar’s early attention from Low’s Alan Sparhawk set up an expectation, largely fulfilled, of the genre she might occupy. Last War conversely shows the artist shaking off constraints and opening out, at times even on the attack. Running to nine tracks in not much over 30 minutes, the record does not exactly hang around, but is pleasingly and proficiently executed, its lo-fi, reverb-charged veneer helping keep a live feel to the proceedings.

“Kill the Fun” eases into the record with that familiar-yet-can’t-quite-place-it sense. Overlapping synth notes herald a welcoming, loping bass line, while Bonar’s vocals sweetly seduce. It’s no standard love story, though, and Bonar’s wish to “be each other’s somebody” is countered by the reality of her lover getting back on a plane and going to work “where you never knew my name.”

High, hollow, and trebly bass features in several of the songs, with the opening four tracks sounding particularly connected, echoing sounds of ’60s girl groups meeting ’80s new wave. The pick of these, the title track, sets conflict aside, balances dark times, and ushers in a kind of hope, perhaps engendered by Bonar’s fairly recent motherhood. Elsewhere, Bonar targets false compassion in men (“No Sensitive Man”) and plays with ambivalence to great effect in the outwardly straightforward “Bad Reputation”, giving herself a hard time: “I wish I could date my former self/ She’d be a fun girlfriend.”

Bonar has described the songs as “Twin Peaks-inspired,” and indeed you could imagine her onstage at the Roadhouse while Coop tries to decipher the giant’s latest message. “Eat for Free” closes the record in a laid-back, reflective way, with Justin Vernon adding soft, high harmonies that could almost be Bonar herself double-tracking. A more familiar, woody-toned Vernon also features on the deceptively simple “From a Cage”. Last War seeks to marry ambiguity with charm, an air of mystery with a memorable surface impression. In both respects, it succeeds.