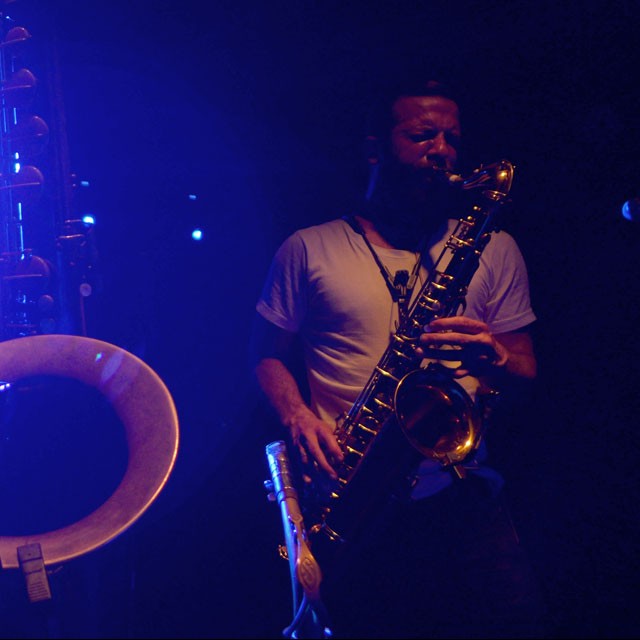 Colin Stetson might be the only true virtuoso enclosed within the “indie” canon. Since its inception in the late ’80s, alternative rock has never felt much of a need to reward skill for skill’s sake. It’s seen plenty of talent, but that talent usually manifests as a willingness to defy convention and break all the rules. Indie fans hunger for invention over rote dexterity; we’d rather see someone wailing her guts out than navigating a perfect arpeggio. It’s strange to arrive at a rock club like Schubas and dissolve into a crowd of people waiting only to see a man play a saxophone very well.

By performing live with indie powerhouses Arcade Fire and Bon Iver, Stetson needled his way into a world of music typically populated by the instruments that first emblematized rock ‘n’ roll back in the 1950s. He looks nothing like a rock band, but he belongs in that world. His songs follow the rules of rock; they careen through familiar chord progressions and ground themselves in a percussive clack. The only difference is that Stetson does all the work of a rock band by breathing into a machine.

Though he’s most often photographed with his enormous bass saxophone, Stetson composes on the alto and tenor, too. Chicago’s close enough to home that he could pack up all three for his set at Schubas. The brass mammoth stood flanked by its smaller counterparts on a stand by the lip of the stage. I was primed to see him wrestle with an instrument nearly as tall as I am, but he picked up the smallest of his tools for the set’s opener “Among the Sef”. But perched on the edge of Stetson’s windpipe, even the smallest sax sounds like a sea monster.

Stetson doesn’t just play his instrument; he sings through it, too. He funnels a hum through the swoop of the saxophone that sounds even more human and visceral than if he were just belting straight into a microphone. His set seemed to be a self-imposed challenge to erase the boundary between his body and his instrument, as though a single channel ran all the way from his diaphragm to the tiny mic attached to the bell of each sax. Watching Stetson play was like watching some rare organism struggle to be born.

He came up for air between songs, thanking us for the volatile applause that punctuated each vigorous stretch of circular breath. He has an air of warm humor about him; he had a glass of red onstage next to a water bottle, and when an audience member called out, “Don’t forget your wine!”, Steson replied, “Thank you for the reminder. I was busy.” He’s the kind of musician who has no agenda in performance except to share the deep yearning that his songs hold, the kind of desire that can only be expressed by breathing continuously into a brass porpoise for 10 minutes at a time. Watching the sheer exertion of his playing became part of the music. It was the most harmonious wrestling match imaginable.

I laughed a little when Stetson spoke apologetically about the length of his set; it was five songs long, though just one of his songs seems tougher to play than most rock albums in their entirety. “They mean so much to me and they take so much out of me,” he said. He seemed constantly to be playing from that point in dead physical exhaustion where you paradoxically discover a new well of energy, a second wind.

It’s kind of a post-human thing that Stetson does, a post-human virtuosity. Here’s this guy who’s figured out how to extend his body into another vessel, to master that vessel as though it were a part of his own body. He plays the sax the way a brilliant singer sings, with a full range of dynamics and texture and layering. He can dip from a rattling crescendo straight down to a muted burble in an instant, never breaking the flow of air. He is a machine of breath and muscle and sweat and drool, pouring this beautiful, lonely music directly out of himself. There is nothing else like watching him.

Setlist:
Among the Sef
Judges
The Stars in His Head
To See More Light
Part of Me Apart From You