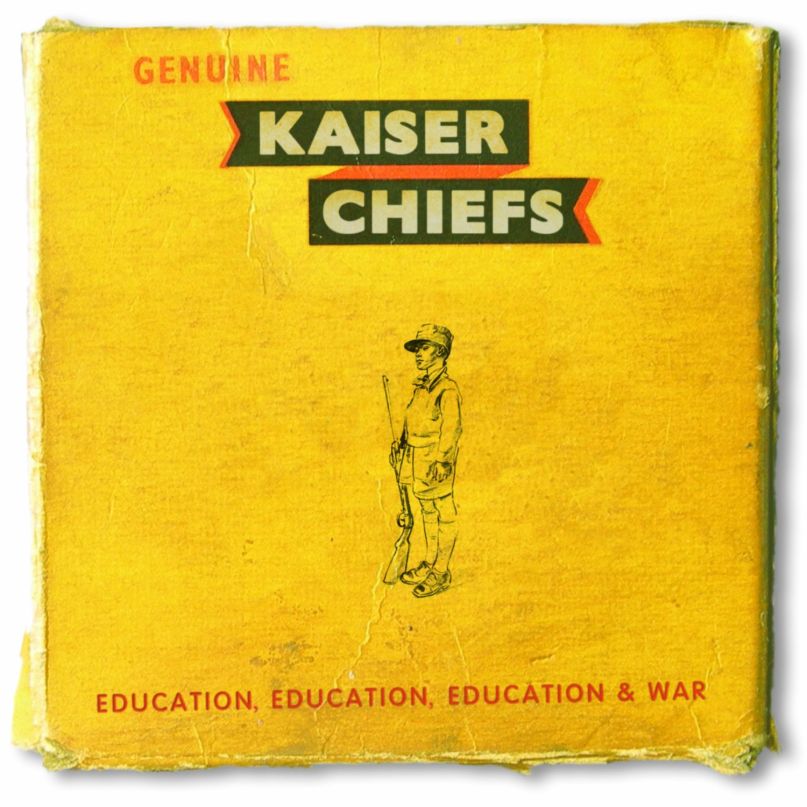 At a certain point in life, you start taking your job “seriously.” You stop making up excuses to take a day off. You iron your shirts. You wear ties. You tie them yourself. You stop slacking off, or at least seriously cut back on it. You start calling it a “career.” It’s an inevitable phenomenon, one born out of equal parts financial necessity and personal pride. And it happens to bands, too. They start sleeping in hotel rooms and not in backseats or on the couches of concertgoers. Eventually the tour vans turn into tour buses. Or at least the vans aren’t as rusty.

That switch happened sometime in the late 2000s for Leeds post-punks Kaiser Chiefs. In the interim years, the band have climbed the corporate ladder, so to speak. It even included some staff shuffling: In 2012, longtime primary songwriter and drummer Nick Hodgson quit the band, leaving singer Ricky Wilson to take over the authorial duties. Even with that change, at this point the Kaiser Chiefs are middle management. They do their jobs well and fiercely toe the company line. On their latest record, Education, Education, Education & War, the band sounds as if they’ve shouldered the responsibility of representing every UK rock trope of the past 15 years, and some from even further back, with all businesslike precision, but also, unfortunately, businesslike imagination.

That’s actually not a particularly damning criticism in this case. So many of the sounds in which the Kaiser Chiefs traffic on this record are vaguely anachronistic, so to hear them played with dedicated aplomb is sure to be satisfying for any fan of that classic Britpop sound. Opener “The Factory Gates” fares well in this regard. Its DNA is spliced from the likes of Futureheads, Art Brut, and Pulp, and it charges forward with spittle-lipped anger and propulsion, ultimately sounding like it could inspire a mosh pit at any point from the turn of the millennium until now. Other stampedes like “Ruffians on Parade” and “One More Last Song” pull off the same tricks to lesser effect.

There’s a lot of the This Sounds Like That game to be played over the course of Education. The over-the-top laughter near the beginning of “Misery Company” is on some hilariously overdone Pink Floyd shit, and it’s paired with “In-A-Gadda-Da-Vida” organs. The movie credits rock of “Coming Home” seems like it was co-written by Bono and Gary Lightbody. “Cannons” could be the child of Duran Duran, The Jam, and Franz Ferdinand for its first four minutes and then devolves into a spoken word anti-war outro (read by Bill Nighy for no apparent reason).

But don’t take the transparency of the album’s influences to mean that the band doesn’t own these songs. The band has long made its name on easily shoutable choruses, and from “You are contractually tied to death’s door” on the opener to “You and me on the front line” on “Bows & Arrows”, the genealogy of Education is less important than the execution of the album’s brash grandiosity.

That execution is more than satisfactory for someone looking for a few anti-establishment sentiments to yell, but sometimes the severity of the music counterintuitively detracts from the seriousness of Ricky Wilson’s lyrical sentiments. And make no mistake, Wilson takes Education, Education, Education & War seriously; the album title itself is cribbed from a Tony Blair speech. But moments like the chorus of “Misery Company”, which starts with the line “The weight of the world is in our hands,” do little to afford the enormity of that sentiment. Later, “My Life” traffics in the type of suburban ennui that’s usually gone by the next round of Call of Duty, but the drama of the music wants to lend those moments a life-altering level of melancholy.

Making music is a career for the Kaiser Chiefs at this point. It’s a paycheck. It’s dinner on the table. It’s rent. That the band approaches their job with care, precision, and energy is admirable, and it serves to make Education a pleasing listen. The rigid, suited precision with which they approach their craft makes the band good at their jobs, but combined with the lack of musical distance from their contemporaries, it also dims the album’s luster. The Chiefs have been around almost 15 years at this point. It might be time for more than just an employee roster shake-up.