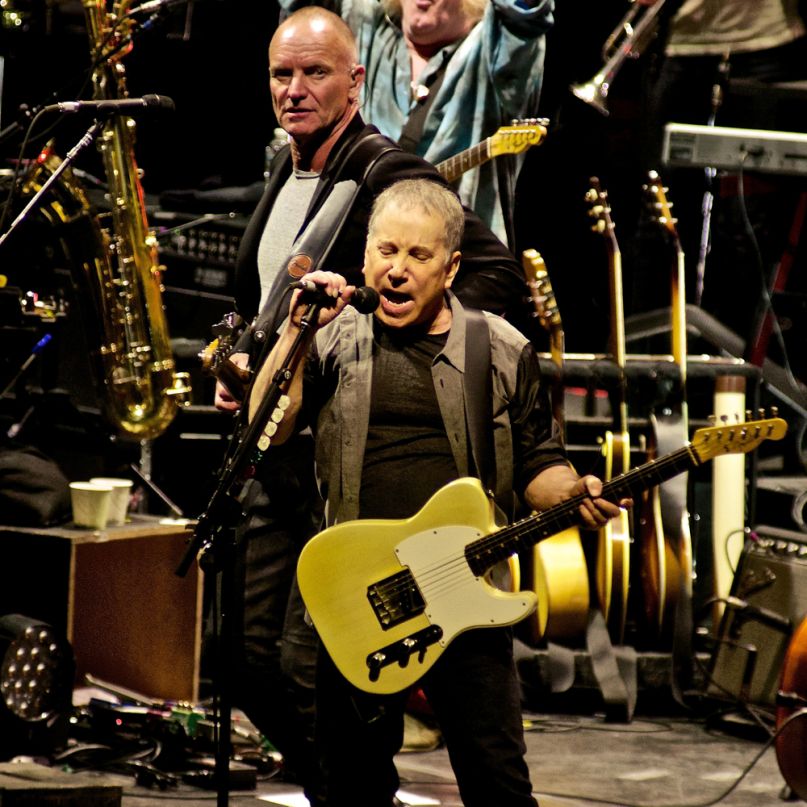 It’s called the ‘On Stage Together’ tour. Two icons, one stage, great in theory, but will it work?

That’s the question that crossed my mind entering New York’s equally iconic Madison Square Garden. Paul Simon evolving out of a folk-rock 1960’s scene, and Sting coming from the London New Wave movement of the late ‘70s with The Police. Each went on to go from their groups to launch highly successful, but quite different solo careers. Even their physical appearance had a bit of the mix-and-match disparity– a tall wiry Sting versus a shorter somewhat frumpier Simon.

With a large band made up of members of their respective tour musicians, the two took the stage together at the start in an effort to emphasize their synergy and musical compatibility. At ages 72 and 62, respectively, neither Simon nor Sting feels the need for grand standing. Sting especially appeared willing to dwell in the background shadows. Because of this, their collaborative songs never felt forced. Both men have the musicianship and experience to make it work, and the chemistry was there. Two sophisticated musicians willing to push past their musical boundaries and share their wide ranging multi-cultural musical tastes.

After their first few songs together, the two alternated turns on stage. Sting demonstrated a more mainstream pop sensibility. His trademark blend of reggae and jazz influences unmistakable; the rhythms both approachable and complex at once. On the other hand, Simon led some of the evening’s more quiet, elegant moments. There’s a stately, statuesque beauty to his music, though paired with Sting, it proved the night was an exemplary ode to intelligent musicianship.

And both artists visibly appreciated their fellow musicians. Each traded solos with various band members, reveling in the quality of the support that they had on stage.The depth of the musical catalogue that each had to pick from was impressive-and kept the crowd both entertained and guessing as to which “greatest hit” was to be played… and with who.

As the collaborations evolved throughout the night, one’s appreciation for the pairing did, too — especially as their condensed genius seemed larger than either part. Their vocal harmonies adapted seamlessly to the other’s style: Sting’s raspy voice and Simon’s more pure tone focused on what ultimately matters the most for each of these songs: the melody.

Surprisingly, the night never felt like a battle of egos, but, instead, a lesson in music history. Each brought along a repertory of undeniably infectious hits, which sort of explains why Simon described the concert as an “experiment.” Hypothesis: Two iconic performers coming from different backgrounds and styles to shed a spotlight on their respective strengths. Conclusion: Great musicianship. A beautiful harmony.

Setlist:
Brand New Day
The Boy In the Bubble
Fields of Gold
Every Little Thing She Does Is Magic
Englishman In New York
I Hung My Head
Driven To Tears
Walking On The Moon
Mother and Child Reunion (Sting and Simon)
50 Ways To Leave Your Lover
Dazzling Blue
Graceland
Still Crazy After All These Years
Me and Julio Down By The Schoolyard
Fragile (Sting and Simon)
America
Message In A Bottle
The Hounds of Winter
They Dance Alone
Roxanne
Desert Rose
The Boxer (Sting and Simon)
That Was Your Mother
Hearts and Bones
Mystery Train
Wheels
The Obvious Child
Diamonds On The Soles of Her Shoes
You Can Call Me Al
Encore:
Bridge Over Troubled Water (Sting and Simon)
Every Breath You Take (Sting and Simon)
Late In The Evening (Sting and Simon)
When Will I Be Loved? (Sting and Simon)