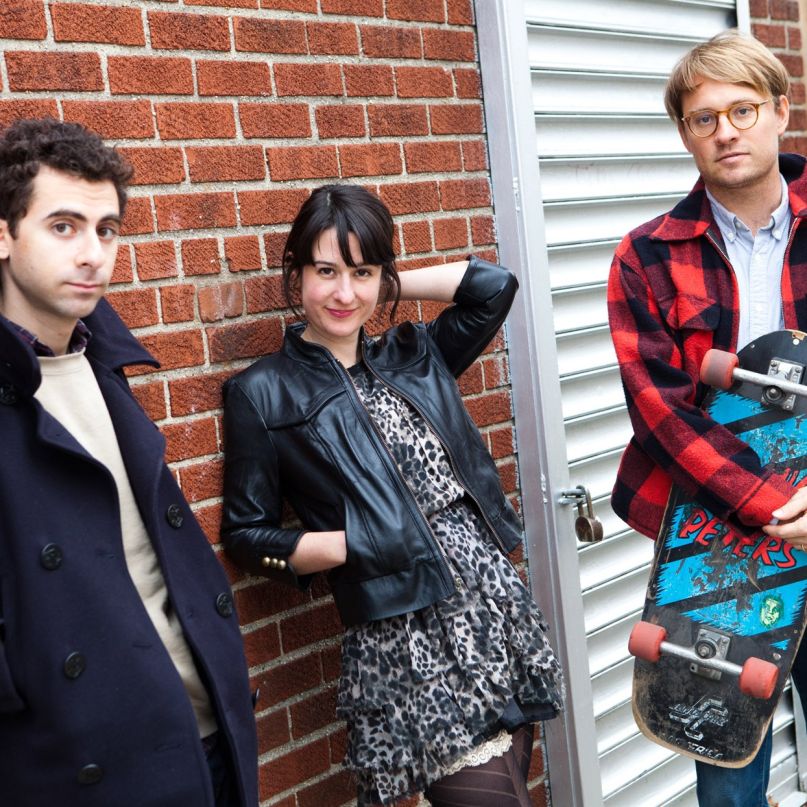 Holed up in the insular south Brooklyn neighborhood of Red Hook, an indie rock trio who go by the name of Hospitality just released their sophomore album,Trouble. The second offering from Amber Papini, Nathan Michel, and Brian Betancourt, like their debut, came out through the storied North Carolina indie label Merge Records. In an era of electropop glam and slaphappy ‘80s retro reincarnations, Hospitality stick very close to the bounds and ideas of rock itself. There are long, sidling bass lines, and guitar parts punctuated with a smattering of drums, and the occasional electronic freak-out — largely due to the sonic proclivities of Michel and his previous solo work.

Their relatively low profile might be due to this traditional bent in an atmosphere that’s eager for novelty, but the trio’s slow and steady pace has begun to pick up steam for their second record. As a former denizen of Red Hook myself, I was more than happy to return and meet the trio there at local watering hole of choice, Fort Defiance, for a brief chat over some chicken liver pâté and a few drinks.

The band are gearing up to head down to Austin for SXSW, where they’ll be playing Consequence of Sound’s CoSigns day party on Wednesday at Hype Hotel, among other shows. They’re also just finishing up a new 7-inch split with Lambchop, which will be released as part of a special subscription to celebrate Merge’s 25th anniversary. Aside from contextualizing the new record, we discussed how they’ve dealt with having their sound pigeonholed early on as “twee,” their band-crush on fast-rising sister trio HAIM, and their debut European headlining tour.

So, I listened to Trouble first. For some reason, I had just never encountered you guys. So, then I went back and listened to your first record. Now that they’re both out, how do you feel about the albums in contrast to one another?

Amber Papini (AP): I like that they’re both really different. I like the process of this one because we had more control over how it sounded. The last record, we didn’t have a lot of money, so we had to sort of trust. And the guy [who recorded it] did a great job. We just sort of let him do his thing. He was doing it late night, and he was totally doing us a favor. I think what happened with it sounds great. But this record, we really worked on it in a way that I think we really wanted to, and I appreciate that.

Nathan Michel (NM): Also, I think we go through periods of liking things and not liking things. And right now, I’m not that into the first record. It’s a little bright sounding, and it’s a little too fast. The energy just seems a little weird to me. I have a feeling that in a couple years I’ll come back around to it.

Brian Betancourt (BB): I like seeing the first record in the context of our lives. Because, touring the second record, we get the chance to play two albums’ worth of material, and we kind of mix and match between both records as far as the flow of the show goes. I can see songs from the first record in a new light. Sometimes we’ll tweak arrangements for where we’re at now, and it definitely makes me appreciate the songs more. I haven’t gone back and listened to it.

Did you have a specific goal for this record to separate it from the first one?

Right! And I did not think you guys sounded like that! I listen to twee, and I love groups like Belle & Sebastian. Don’t get me wrong. But I did not hear that.

AP: But I mean, that’s what happens to a lot of bands. It’s not like the journalists were that crazy wrong. We do have this ramshackle-y kind of sound that’s amateur. It was great, I love that, but it had that sort of vibe. I don’t mean that as a diss. It was like a cool amateur.

BB: We were still learning, too. Twee can mean different things. There’s twee music that’s really cool, but the word twee by definition is a little bit negative.

NM: And I don’t think it’s good at the moment. I think it’s pretty low on what’s “cool” now. So, it’s kind of a bummer that we got attached to that because we didn’t set out for that. We just kind of do our things. We follow what the song needs.

Maybe the twee concept is tied to your name a little. Hospitality? Maybe people conceptualize that word in a “twee” way. But when I think of hospitality, it’s something that is very elegant that can change lives and change experiences. So, in that sense of welcome elegance and attention to detail, I do think it matches your sound.

BB: That’s such a great way to look at it. We’re so out of answers to that question.

NM: I like it, too, because it has this intangible quality. It’s hard to pinpoint and say, “That’s hospitality.” It has this abstract quality. It just kind of exists in actions. I don’t know where it is.

My favorite song is “Nightingale”, so I wanted to ask about that one. That was the first song I ever heard by you guys.

NM: Oh, cool. No one likes that one! Just, no one talks about it.

AP: So, “Nightingale” was an old song that I brought back because I originally wrote it on keyboard. But last year I was really into Led Zeppelin, and I really wanted to write a riff song. And I couldn’t for the life of me write like Jimmy Page. I tried and tried, and everything sounded grim and horrible. But I had this old song, “Nightingale”, that has a riff in it. So, I just sort of brought it back in and started playing it on guitar, and we turned it into like a big band rock prog sort of song.

BB: It’s fun to play live because of that.

What about dream collaborations? What other musicians would you love to work with?

NM: Growing up, I was also a Jim O’Rourke fan. He’s great.

AP: We also really like HAIM! The record is really good. I’m obsessed with them.

BB: I did this Australian interview, and all I talked about was HAIM because I didn’t know if they were big there.

NM: I just basically want to be friends with HAIM right now. We would love to do something with them!

So, you have been recording some new material?

AP: Merge has a subscription 7” series to record their 25th anniversary. I didn’t know if it’s official and we can publicly announce it? Yeah. So, we did one.

BB: It’s a brand-new version of a song that’s on our record, but it’s a completely different version. It’s a split 7” with Lambchop, which is really exciting.

It’s so cool that you get to work with legacy bands like that being on Merge.

AP: It does feel really good. They have been so nice and helpful to work with. They give good advice and are respectful of your creative space. They’re hands off and let us decide a lot of things.

When you’re all writing songs, do they belong to each of you separately? Or do you collaborate?

AP: We write sort of privately and then, for this record, I wrote most of the songs, and then Nathan wrote a song on this record.

NM: Amber writes most of the songs. We then kind of flesh them out. Like her songs tend to be short usually, so like “Rockets and Jets”, we kind of extended the end. “I Miss Your Bones” we extended the end.

AP: Sometimes some songs become jams. So, I came in with “I Miss Your Bones”. I came in with the first half, and then, based on that material, we created this jam.

I was wondering, because some of them, like “I Miss Your Bones”, have that almost peppiness even when they go into the jam, whereas other ones like “Sunship” are more mellow.

NM: Well, the one I wrote is “Last Words”, the more electronic one. And then I wrote the end of “Sunship”, when it goes into that jam. And yeah, I can see how you would think it’s different writers, but I think that’s just more our broad tastes, and we just find the vibe for each song. And they could all go either way, all those songs. “Sunship” could’ve been an electronic song.

BB: The song that we did multiple versions for that’s going to be on that 7” is kind of like that. We had a rock version that was really upbeat, but in the studio, we broke it down because it wasn’t working for one reason or another, and it became kind of mellower.

So, the version that’s going to be on the anniversary 7” is a rock version?

BB: Yeah, which is actually the original version, but now it’s going to be thought of as this other version.

Your record just came out. Does that just mean a lot of touring? What are your plans for the rest of the year?

BB: In May, we’re touring Europe for the first time, and we’re headlining. Plus playing a couple of festivals, including Primavera Sound in Barcelona. There’s the Merge 7” that’s coming out through the subscription series, and then there’s another 7” that’s coming out for Polyvinyl. They have this really cool series where they send a 4-Track recorder to a bunch of different bands, and you have to use that to record the song. So, we did two songs on that, one was an old one and one was just a jam. The jam was kind of an instrumental, but the song was a song of Amber’s that we used to play from a long time ago. I think it’s coming out in June.