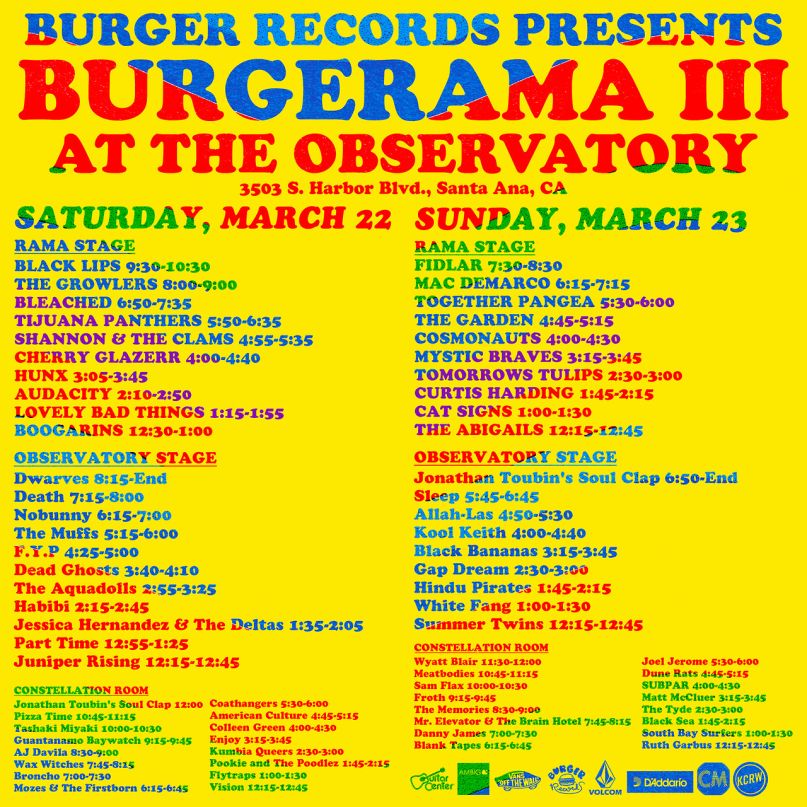 Among the many things that California has given the world, fast food is probably the worst. Like, if you consider all the human health and environmental problems that stem from our resource consumption and how fast food has contributed to our rapid destruction of the planet, we basically fucked everyone. So, sorry about that.

Now, I don’t think Burger Records or the artists at Burgerama III are in any way as harmful as fast food; they don’t matter nearly enough for that. Burn. But the scene that has developed around this growing festival is about as good for a teenager as their diet of microwaved sandwiches and greasy fries.

There’s something to be said for having a good time and turning off your mind for a few hours, sure, just as an occasional double-double isn’t going to clog your arteries. But, a steady diet of Burgerama music and, well, you get the kind of atmosphere present at Burgerama III, particularly the first day. As a culture, I’ll take just about any other music scene this side of EDM over it. Never had I wanted a group of young people to start listening to Death Cab for Cutie more.

Everyone had a finger pointed at a different portion of the rather obnoxious crowd. Some blamed Orange County, which I take offense to but can’t really refute. Some blamed the audience being young, which is also true but not every teenager looks like extras from Dazed and Confused these days, right? (Actually, I find it hard to believe that this is what 16-year-olds are like these days.) And still, others blamed those of us complaining as the problem with the festival.

Wait, what? It’s my fault that I found it hard to have fun at Burgerama? Well, yes, probably. Because I’m an adult at a kids festival, and there comes a time where grown-ups just don’t relate to some cultural trends going on with the next generation. Though these drunk, druggy, rather homely, and poorly dressed young people may not seem long for this world, they still appeared to have a good time and you just can’t argue with an event that pleases its audience.

That being said, year three of Burgerama did have some indisputable growing pains, though all were easy to forgive and typical of any event that is always increasing in size and reach. Next time they need more food, and better crowd management, and more non-music entertainment. And maybe next time get some new bands. And seriously, no one went to the Affliction booth.

But yeah, if this keeps getting bigger and music trends shift to more of this kind of two-gear monotony, again, I apologize on behalf of California.