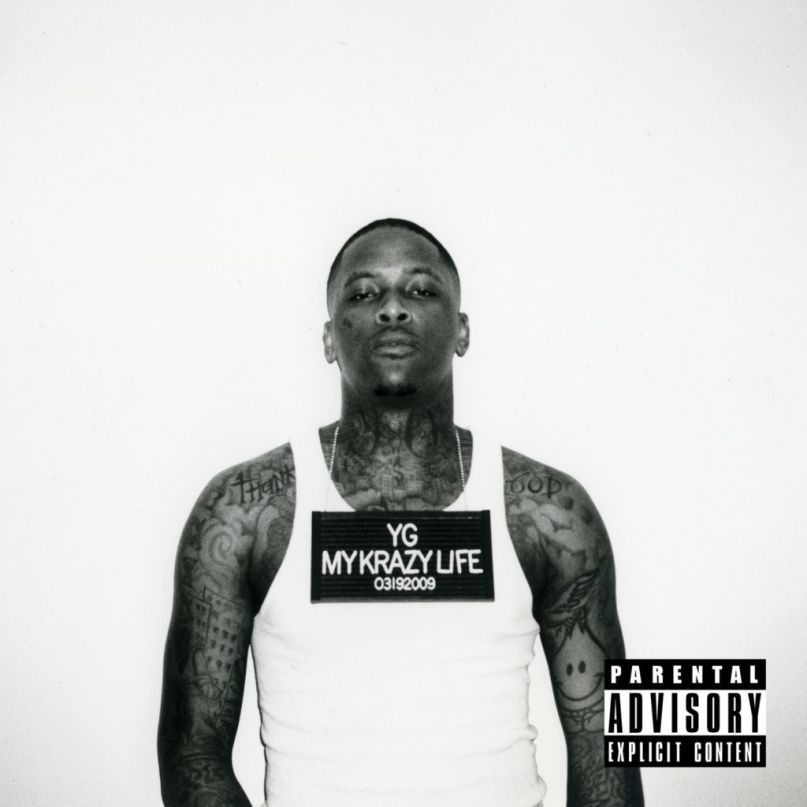 My Krazy Life approaches West Coast rap with all the new-school determination of Allen Iverson driving past Michael Jordan from the top of the key. YG’s Def Jam debut is earning comparisons to The Chronic for its swerving synth-wheeze (you’re obliged to listen on Beats by Dre) and good kid, m.A.A.d City for its cinematic elements (skits, storylines, rapped dialogues). Neither is far off, because here, the gritty, prodigiously horny rapper from Compton has blown the ceiling off his once limited-sounding style. While Tyga, another product of California’s “ratchet” scene, is busy racking up a reportedly six-figure tax debt, YG has made use of some of rap’s most commanding forces for an album as brave as it is fun.

The ominous faux mugshot on the album cover antagonizes YG from the jump. We know he’s from a mad city, but the good-kid label is a little scratchy on him. “I’m the nigga who got homies that be sellin’ drugs,” he raps on the Drake collaboration “Who Do You Love?”, and the implied question is whether it means nothing to just hang out with miscreants. Anyhow, with YG’s Blood and Tree-Top Piru affiliations, red is everywhere, and no one makes the slightest move for his white flag.

My Krazy Life dampens many of its heavy questions with refreshing musical forms. The highlight from a structural standpoint is the Kendrick Lamar-assisted “Really Be (Smokin N Drinkin)”, which applies “Swimming Pools (Drank)” themes to an ever-shifting beat from Ty Dolla $ign and Chordz. “I Just Wanna Party” never had a chance of being just a party song, what with ScHoolboy Q and Jay Rock pounding down the front door. The Lil Wayne interpolation “My Nigga”, meanwhile, is the instant banger here, though it’s not just empty calories.

“My Nigga” also represents the YG sound in miniature. Most of My Krazy Life was produced by DJ Mustard, a 23-year-old bowling ball of a man whose beats are still erupting with the same “hey!” sample and keys struck between one and two beats apart. Fortunately, the album only needs so many tools. On the Metro Boomin production “1 AM”, Mustard’s style is slowed down to crackly, creaky noir. Elsewhere, it cranks up sexual healing that, with help from R&B Romeos Dolla $ign and TeeFLii, makes R. Kelly’s new album sound like On Golden Pond. Despite the “fresh outta jail” thrusting force, the sex talk is at its least engaging on “Left Right” and “Me & My Bitch”. Usually, though, YG can be counted on to revitalize whatever he finds suitable for exploration in the first place, whether it’s your girl or solar-powered West Coast traditions.