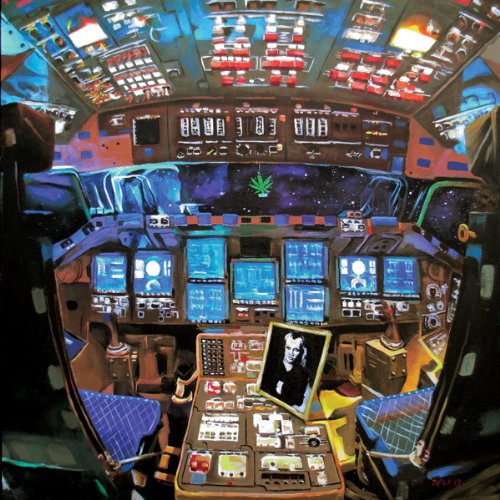 Thee Oh Sees have a new record called Drop coming out in April, but John Dwyer has insisted that its release will be followed by a hiatus for the band. It’s ostensibly so Dwyer can get situated in his new home in Los Angeles, as he left the hyper-gentrified San Francisco just as friend and contemporary Ty Segall did months prior. But even with Thee Oh Sees on hold, Dwyer isn’t one to rest his musical chops; rather, he installed a Tascam 388 in his house, picked up some drum sticks, plugged in some analog synths, and made something.

Hubba Bubba is Dwyer’s debut under the moniker Damaged Bug, and while its electro stylings are far from Thee Oh Sees, the songs share the same recognizable pulse and general craziness. While the shifting rotation of bandmates in the past likely meant a large stake in the direction of Thee Oh Sees, here he’s on his own, no one else there to filter ideas through. The resulting record is a collection of hit-and-miss pop experiments — fully formed songs sitting alongside demo-quality throwaways and psychedelic bleep-bloop Wurlitzer noodlings.

For about half of Hubba Bubba, Dwyer sings in a contrived post-punk monotone that subdues his vocal melodies and does his songs no benefit. On opener “Gloves for Garbage”, fuzzy chords tangle with a sugary synth line before everything upbeat and cheerful is muted by Dwyer, who comes in sounding groggy. “Rope Burn” and “Eggs at Night” follow suit, juxtaposing danceable backbeats with lazy croons. Even worse are the instrumental sections (“Catastrophobia”, “1-2 an Airplane”), which come off as indulgent filler.

Hubba Bubba  hits a nice groove on its B-side, when Dwyer stops trying to be Kraftwerk and Suicide and actually sings. The ultra-catchy single “Photograph” and the rising crescendos of “Hot Swells” are fine pieces of songwriting — vibrant, psyched-out, and above all, memorable. Closer “Wasteland” is perhaps the strongest moment, as Dwyer takes the bass line from “Baba O’Riley” and cuts straight to the heart of that song with his own blunt, revised lyrics: “What am I here for? I have to know/ I see a wasteland outside of the door.” Here, the monotone vocals feel applied and give the song an added emotional weight.

Hubba Bubba is a record that realizes its potential as it plays, starting off unsure and wavering before closing with its best tracks, which sound confident and self-assured rather than anachronistic and forced. Dwyer’s always been one of those learn-on-the-job musicians who puts songwriting above technical proficiency, so it’s not surprising to hear some undeveloped, underwritten material on this first Damaged Bug release. But the inconsistency brings down the album as a whole and makes it a difficult front-to-back listen.