Watch: U2 on The Tonight Show Starring Jimmy Fallon 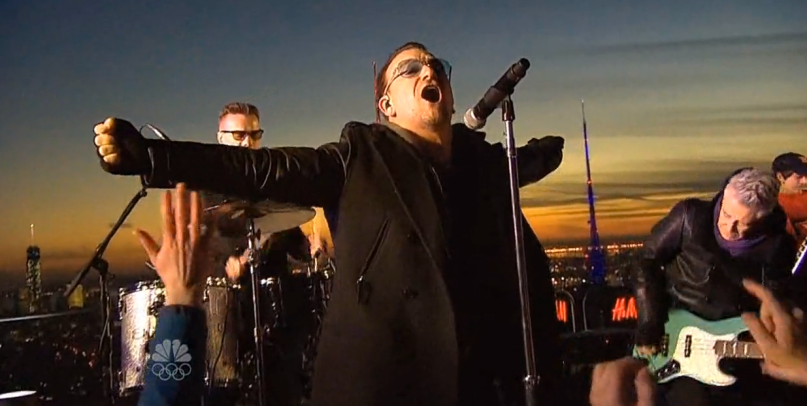 Yes, Bono, The Edge, Adam Clayton, and Larry Mullen, Jr. scaled the Top of the Rock, where they performed alongside the marching band of Sami Jarroush’s alma mater, Rutgers University. Together, they performed their latest single, “Invisible”, as the sun descended upon New York City’s iconic skyline… officially bringing on the night. Poetic? That was the effect, at least. Though, in hindsight, it’s a shame their latest single isn’t “Beautiful Day” — would’ve been epic.

Before the show’s end, the Irish foursome returned indoors for an interview with Fallon. Amongst many subjects all U2-related, they discussed performing at a high altitude, which included a joke about Clayton that went over everyone’s heads. Shortly after, Bono gave Fallon a new (RED)-sponsored guitar and then the band proceeded to perform an acoustic rendition of their Oscar-nominated song, “Ordinary Love”, alongside The Roots. As site photographer Heather Kaplan observed beside me, “All U2 songs should be acoustic… until The Roots come in.” To the moon, Heather.

Catch it all below.

* – Rivers was originally banned from The Tonight Show by Johnny Carson after she was offered her own late night gig. Last night marked the 49th anniversary of her first Tonight Show appearance: February 17th, 1965. “It’s about time!” Rivers said in a statement. “I’ve been sitting in a taxi outside NBC with the meter running since 1987.” Bottom line: J-Fal knows what’s up.