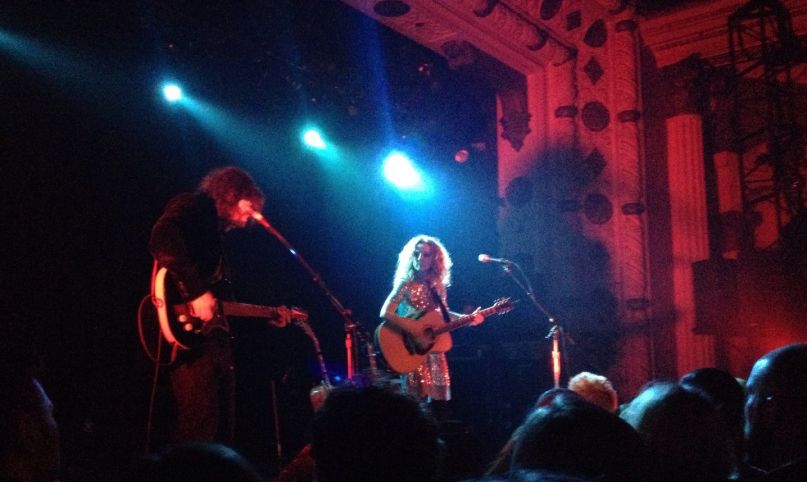 A friend of mine recommended that I listen to the song “Rain” off the album 1000 Kisses by Patty Griffin.  Ever since that day I’ve been hoping to catch Griffin live to see if her intensity, strong vocals, and sincere story telling could match her album’s presence. Friday night was exactly what I’d hoped for.

In a sequin dress and black boots, Griffin strolled onto the stage at Chicago’s Metro with her Gibson Hummingbird. The people around me excitedly whispered “Icicles”, a fitting choice off her fifth studio album Impossible Dream. She caught her breath and greeted the crowd, explaining that the last time she was in the Second City there was terrible weather and that this time she had brought a snowstorm with her. “I swear to God it wasn’t me,” she gasped before jumping into “Ohio”, a song of her latest album, American Kid.  Longtime pal Craig Ross filled in for Robert Plant, who sings back up on the new album, was Craig Ross, and kept her company throughout the night.

Occasionally, Ross would step off stage letting Patty take things solo, playing songs like “Heavenly Day”  and “Trapeze”.  She gave a big shout out to Anais Mitchell, who has been touring with her and also played a killer show.  Ms. Griffin was particularly chatty tonight, sharing stories and origins of songs such as that of “Get Ready Marie”, a song based on a photograph of her grandparents.

A special treat for those attending would have to be the songs played from Silver Bell, an album that, until last year, had never been released. (Thanks, Universal.) Patty confessed “Little God” was about a little man she met in the music industry, which put a new spin on the old tune.  The song, “Truth #2”, has been covered many times, most famously by the Dixie Chicks. Griffin decided to take ownership of that one tonight as the crowd went wild while she furiously strummed the guitar and belted into the microphone.

Highlights of the night included new song “Don’t Let Me Die in Florida”, even despite a false start due to some sound issues. “Wild Old Dog” and the Jimmie Durante cover “Glory of Love” really blossomed on-stage, though the biggest hit with the diehard fans was “Poor Man’s House”. This deep cut off her first album, Living with Ghosts, had the majority of the crowd rocking and crooning along. Weather be damned, Chicago never felt warmer.