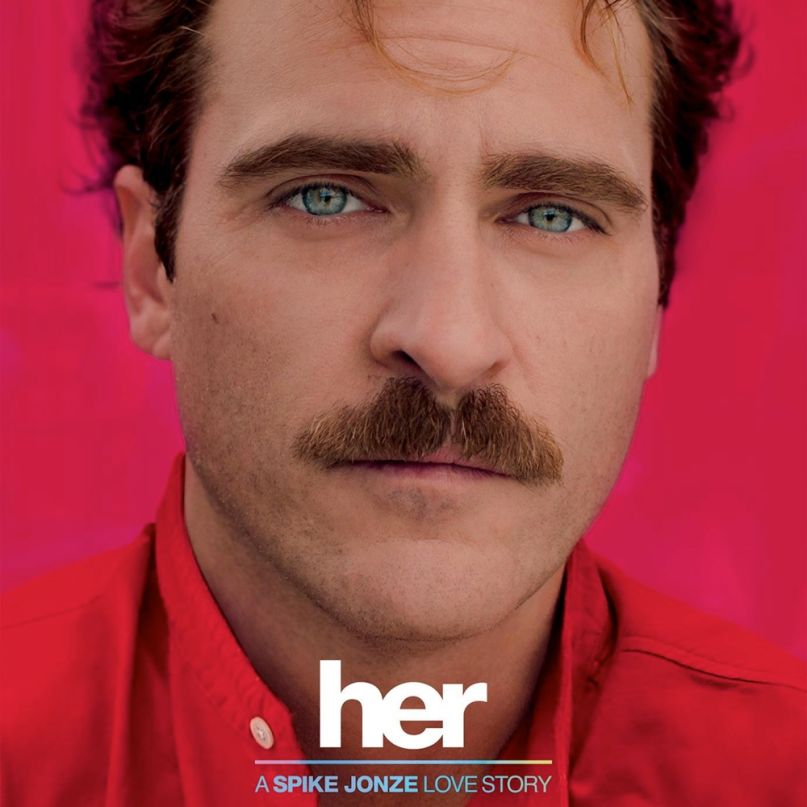 Spike Jonze’s science-fiction masterpiece, Her, is set a decade into the future, but there’s so much about the film that feels tangible for society today. For one, it’s hardly as dystopian a world as Jonze’s previous works (see: 1999’s Being John Malkovich; then, take: uppers, sugar, anything to motivate you, ASAP). But really, it’s the seemingly unprecedented relationship Joaquin Phoenix’s Theodore Twombly has with his revolutionary OS system (voiced to perfection by Scarlett Johansson). What starts as a simple working relationship, no different from ours with Apple’s Siri, blossoms into the top-level romance that leads romantics to start thinking, I could spend my life with this someone. And so he tries, and, well, audiences relate. After all, we also wake up, eat, sleep, at times fornicate, and even shower with our OS systems. They’ve become appendages of our bodies, a modern communication tool that’s more or less a form of evolution, and the closest thing we have to a real-life soul in the digital era. As Arcade Fire sang on last year’s “Reflektor”, “We fell in love when I was 19/ And I was staring at a screen.” How fitting, then, that Will Butler scored the film.

Actually, how fortunate for Jonze. Butler not only “got” what the cult filmmaker was going for with Her, but managed to enhance the project’s themes and visuals. His score, written with multi-instrumentalist Owen Pallett, is substantial proof, a strikingly human and organic collection of music that keeps the film grounded in reality. While Twombly shuffles through a future Los Angeles, passing time with advanced video games and handless computers, Butler and Pallett follow along with archaic instruments like the piano or violin. Oddly enough, this wasn’t always the case; in fact, when Johansson replaced Samantha Morton last minute, the score changed “radically,” as Butler told Billboard. He explained: “The movie got less high-concept and became more about these two people. The music did the same thing: It started in a Blade Runner world and slowly became more piano-centric and less epic, with strings and warm synthesizers.” When you watch the picture, or even listen to the score while walking around aimlessly, it’s jarring how timelessly it resonates.

Then again, age is all about perception, especially for music. As Radiohead’s Jonny Greenwood argued recently for “guitar music” with NME, “Guitar bands forming now are often playing the instruments of their grandparent’s generation — and often in the same style. The Beatles didn’t pick up banjos when they started, after all…but then, violins are even older. So, I can’t decide. I guess, looked at in the right way, things like 808 drum machines are now very old, but still ubiquitous. So maybe it’s better to think of all these things as being as current — or as retro — as anything else. I enjoy there being lots of technology to play with, however old it is.” His argument speaks volumes for Butler and Pallett’s score. Taken separately, the droning ring of “Milk & Honey” sounds several hundred years older than, say, the lonely stroll of “Songs on the Beach”. Yet, together, they articulate a world that’s between two lives — real and digital.

How they keep that delicate balance really is a marvel to their talents. In the same interview, the ever-modest Butler claims: “We’re just rock musicians; we don’t know how to do it.” But I know that’s bullshit, Jonze definitely knows that’s bullshit, and so does the Academy who awarded him a nomination for Best Score. They’re instrumentalists with an ear for the most human emotions, which is one reason that it’s quite a task to sit through this album without feeling anything. At times, it’s curious (“Sleepwalker”), heartbreaking (“Loneliness #3 (Night Talking)”), meditative (“Songs on the Beach”), bittersweet (“Photograph”), and hopeful (“Dimensions”) — all characteristics that wouldn’t likely be attributed to a handheld device. On the silver screen, however, they are.

Fans of the Arcade Fire should also find solace in hearing traces of two Reflektor tracks here. A variation of “Supersymmetry”, originally written for this film, and the New Wave-juiced “Porno” both weave in and out of the score’s middle section: “Morning Talk/Supersymmetry” and “Other Places”, respectively. The former retains much of its structure, though the latter’s stripped down to the bare essentials and reworked on piano and strings. It’s important to note that these two works soundtrack the film’s most integral scenes, which makes sense then that Butler would retool ideas off of an album they spent years creating. The result, especially on “Other Places”, is an orchestral deflowering, an aural bundle of tension, and pain, and love, and heartbreak that just breathes from its release. (Full disclosure: It’s during the film’s iconic “sex scene” between Twombly and his OS system; so, yeah, you can imagine Butler and Pallett’s own conflicts while writing.)

Her isn’t a complicated film by nature. It’s a love story — read: A Spike Jonze Love Story — for an era that’s only just beginning. When you look at it that way, you can see how the story’s initial thematic threads start tying on to bigger ideas that weren’t there to begin with, which essentially makes this a bigger, more complicated tale. By focusing on the core human elements and paying credence to the future that may or may not come, Butler and Pallett successfully created a portal for any filmgoer today to walk into. That’s not exactly the job or role of a composer, but it’s the mark of a great one. Who knows what the hell happens Sunday night, but if we wind up running a story along the lines of “Arcade Fire wins Oscar,” I’ll be sure whoever writes it links to this for an explanation why.

Essential Tracks: “Song on the Beach”, “Morning Talk/Supersymmetry”, and “Some Other Place”