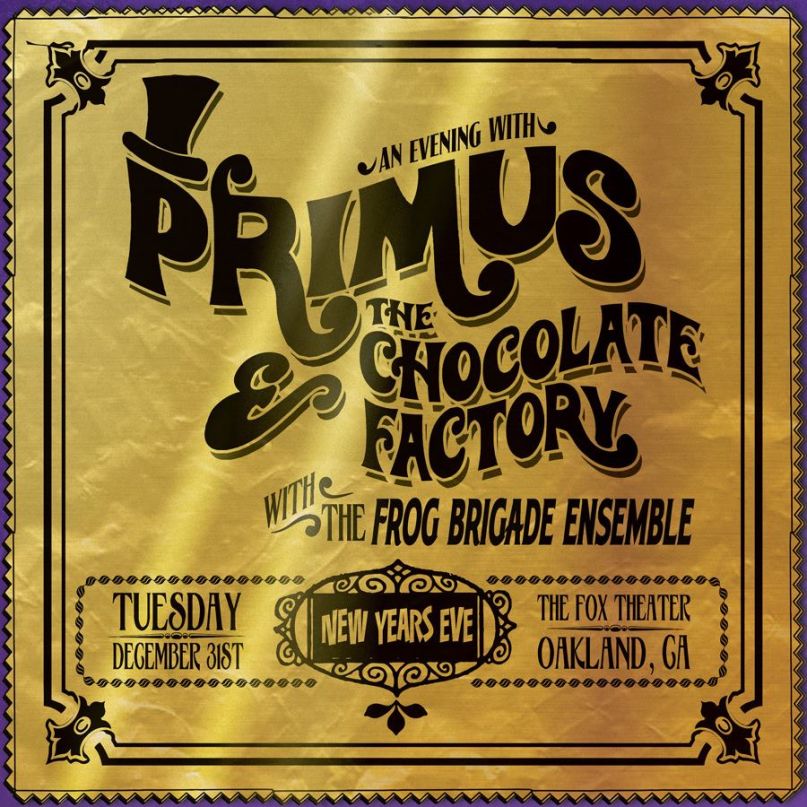 The original Willy Wonka and the Chocolate factory begins with us meeting our young protagonist, Charlie Bucket, a boy who wants more out of life than he can get his little hands on. Charlie is trying to make his life a bit better, all while wondering about how this confusing world works. This is generally how we feel at the start of any new year, or at least I do. We just want to know what’s going to happen next while enjoying delicious food and drink, but Primus want to keep us wondering.

They’re a relatively indefinable band. Go ahead and ask any die-hard fan to describe Primus, and they’ll spew some drug-fueled gobbledygook. To date, they’re the most serious nonsense band I have ever come across. Now, Primus doing a hometown show on New Year’s Eve seemed too good to be true. They came billed as Primus and the Chocolate Factory, with the Frog Brigade. I figured this meant an opening slot from the Frog Brigade, followed by a heavy Primus set to ring in 2014. However, Les Claypool is never the kind of dude to be typical.

What happened after walking through the doors of the Fox Theater is something I will remember for the rest of my life. Claypool and company had no problem blowing our minds clean out of our skulls. Here are five reasons why New Year’s Eve with Primus and the Chocolate Factory was exceptionally sweet.

Yes, Primus and the Chocolate Factory actually churned out a bunch of candy. As you can see in the picture above, it very much resembles Willy Wonka’s whole getup. These chocolates were placed all over the theater, and the merch table even sold more options. The other choices were named after Primus songs and included Mr. Krinkle Bars and Professor Nutter Bars. I did not get to try either, but those chocolate squares tasted like heaven. Obviously, Claypool has a sweet chocolate hookup in Sonoma County somewhere.

Apparently, Primus fans like to dress up in cool outfits. This is becoming more and more trendy as time goes on (see: Arcade Fire’s new dress code), but obviously Claypool’s level of weirdness brings out the freak within. Everyone was dressed up in costumes ranging from golden tickets to Chewbacca, and some just wore rainbow spandex body suits because, why the hell not?

Primus took the stage at 9:30 p.m. sharp with their old logo gracing the background. The stage design was rather minimalistic for this first set, which bummed me out considering the hype behind this whole Chocolate Factory thing. But the trio churned out a number of classics, including a “Those Damn Blue Collared Tweakers” opener, “Over the Falls”, and of course, “Jerry Was a Race Car Driver”. Local Primus shows always lead to one of the scariest mosh pits you will ever set foot in, so you can believe that the entire floor to the venue was shaking as costumed freaks pranced around in chaos. It was true primal bliss for that first set, leaving us all wondering, “What’s next?”

“What do you get when you guzzle down sweets?” This was a valid question asked by the Oompa Loompas in the original movie, and now suddenly we had the answer. Shortly after the first set, the curtain went up to reveal an elaborate stage set resembling the original Wonka film.  Giant lollipops and candy mushrooms littered the stage, and naturally, Commander Claypool was dressed in full Wonka attire. To complete this whole deal, the band covered the entire ’70s Wonka soundtrack, accompanied by live Oompa Loompas, trippy visuals from the film, and that Primus sound turning every song into a living nightmare. This all led up to midnight, where Charlie Bucket and Grandpa Joe climbed into that glass elevator and shot into the sky right as the clock struck 12.

Primus then launched into their final songs of the evening, and all of them seemed worth the wait. They kicked back into gear with “Here Come the Bastards” and kept things going with “Southbound Pachyderm” and an epic closing rendition of “My Name Is Mud”. The entire mosh pit opened up for the finale, prompting all die-hard fans (both in costume and average garb) to rendezvous for a few more minutes of mayhem.

Once the show was over, we all exited that theater feeling much like Charlie and Grandpa Joe. A world that did not make a whole lot of sense suddenly was as crystal clear as that glass elevator. Questions had been answered, and there was a sense of knowing that we were going to be alright and that, for once, we had all gotten golden tickets. Happy New Year everybody.