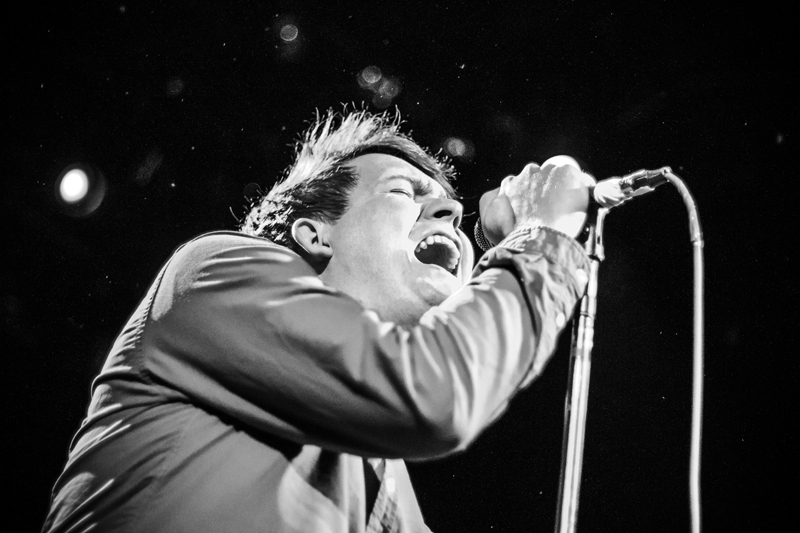 Los Campesinos! have accomplished a lot in six years – five studio releases, a live album, and a longevity and relevance that’s outstripped that of most of their late-2000s peers. It’s not that you wouldn’t have known all that from seeing them at D.C.’s 9:30 Club on a frigid Thursday night in January. It’s just that they still haven’t quite lost that college band flavor (they formed while at university in Cardiff, Wales) – the title of their excellent 2013 release No Blues was advertised via the drum kit, and it looked like one of the Campesinos! had taken a can of white spray paint and a craft store stencil to the bass drum in a fit of boredom. There were no fancy backdrops, no light show. Glam rock this is not, and that’s okay.

Lead singer Gareth Campesinos! (i.e. Gareth David) has a voice quite unlike any other in contemporary music, and as he belted out opener “As Lucerne/The Low,” he held his hands above his head and rallied the crowd to clap along with him. For nearly all of the roughly 90-minute set, there wasn’t a single moment when he wasn’t playing to the fans gathered around the railing on the second level (the 9:30 Club’s equivalent of the cheap seats.) He made the requisite joke about his “undesirable” accent in the U.K. – “I’m what you might call a hick. But over here, I sound like Hugh Grant!” While it was exactly what one would expect from a Welsh frontman’s between-song banter, it confirmed David’s assertion by being charming nonetheless.

The thing about No Blues, as well as the group’s 2011 release Hello Sadness, is that it’s clear that David has been or is still dealing with some heavy shit, and his coping method is to write downhearted lyrics disguised with hearty and sometimes uplifting major-key pop-rock melodies. “There are no blues that can sound quite as heartfelt as mine,” he blurts out in “Lucerne”. While it’s unclear whether his own personal struggles are any worse than what we all deal with in our 20’s and beyond (relationship problems, anxiety about our sex appeal,) he certainly takes them seriously, and his own faith in the direness of his situation makes us buy in. This earnest behavior carried through to his presence front-and-center onstage, where he draped himself over the microphone like he was drunkenly leaning on the shoulder of a girl who had placed him firmly in the friendzone.

While the majority of the set was drawn from No Blues, David and company seamlessly blended old material and new, going as far back as their 2008 debut, Hold On Now, Youngster… with spirited renditions of tunes like “Death to Los Campesinos!” and “You! Me! Dancing!” While the No Blues is certainly more polished, the work of adults rather than rowdy, over-hyped college students, the high amount of energy the band brings to their work, both recorded and live, has never really waned. (Maybe that’s what the exclamation point is for – to remind them to stay excited.)

There are plenty of crowd pleasers in the Los Campesinos! catalog, No Blues’ “Avocado, Baby” being one of them. More hand clapping and fist pumping ensued, encouraging an enthusiastic drunkard next to me to bump into everyone around him until he’d cleared a small radius in which to dance freely. After the encore (which consisted of older favorites “Straight In At 101” and “In medias res”) when the Campesinos! left the stage, my ears still ringing, I felt as though I had witnessed a workhorse band that, after years of keeping their nose to the grindstone, was finally starting to achieve something transcendent. –Katherine Flynn

Setlist:
As Lucerne/The Low
By Your Hand
Romance Is Boring
What Death Leaves Behind
Death To Los Campesinos!
A Heat Rash in the Shape of the Show Me State; or, Letters from Me to Charlotte
For Flotsam
Hello Sadness
Glue Me
We Are Beautiful, We Are Doomed
Cemetery Gaits
Songs About Your Girlfriend
I Just Sighed. I Just Sighed, Just So You Know
Avocado, Baby
You! Me! Dancing!
The Sea Is A Good Place To Think Of The Future
Encore:
Straight In at 101
In medias res