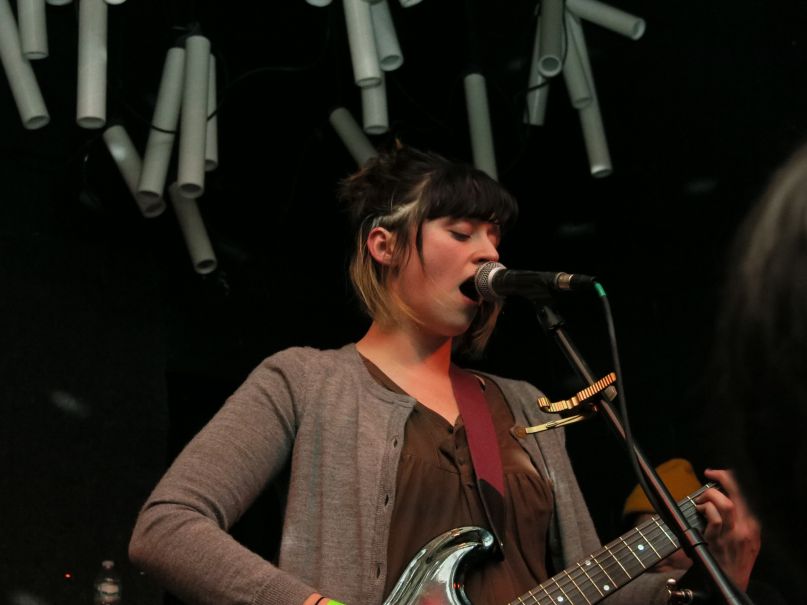 Look: stop hammering on about 285 Kent. It’s over. Turns out, against odds, Williamsburg’s music scene isn’t doomed. Last night, it was just two doors down from the DIY space, at Glasslands, where murmuring herds of expectant twenty-somethings sludged through snow and sub-freezing temperatures for a sloppily intimate rock show. They’d made the trip — most of them, at least — to catch Waxahatchee, the blossoming project of songwriter Katie Crutchfield that’s become far more of a full-band affair in the live department. Crutchfield, caught at the point of her career where she’s still visibly humbled by the adoration but more than capable of handling it, delivered.

You’d be forgiven for not realizing when Waxahatchee, whose 2012 American Weekend made for a delicate, lo-fi home recording of a debut, grew into the sort of act that sells out two buzzy New York venues in the same week. You’d also be forgiven for not knowing quite which opener — All Dogs or Cayetana, from Ohio and Philly respectively — was blaring when you stepped in from the Polar Vortex. Enjoying 30 to 40-minute sets each, the acts both treated the audience to the sort of fuzzy, sweetly melodic indie rock you can find on any Thursday night in Brooklyn, though All Dogs more than compensated for its scant originality with singer Maryn Jones’ propulsive hooks and quietly assured vocals. (The group also gets an edge for demonstrating the best way to respond when “Who Let The Dogs Out?” begins blaring the moment your set ends: a shared grimace, followed by a shrug and sheepish grin. The Breeders’ Last Splash also rang out between sets, which seemed appropriate for a billing exclusively highlighting female-led acts.)

Then Waxahatchee started up. Well, no, that’s not quite right. Crutchfield and her accompanists had prepped the stage for a four-piece, but she emerged for the set alone, her hair knotted up, cradling a clean-toned electric guitar beneath tubular blue lighting. The artist’s “real” set was preceded by a few solo numbers that, frankly, made for some highlights of the entire evening. Those included a wailing cover of Great Thunder’s “Chapel of Pines” and an impromptu, blushingly perfect rendition of “Swan Drive”, which may well be Crutchfield’s loveliest song, even if it is just the ’50s progression lilting along beneath her smoky voice. (“Three songs in and I’m already going rogue,” the singer admitted. “I just really feel like playing this song now.”) At any rate, the four-song stretch bore the unassuming intimacy of American Weekend, even without any of that LP’s rustling, basement sensibilities.

The singer’s band then emerged (Crutchfield introduced the drummer in particular, a new recruit sporting a “KILL EVERYONE NOW” shirt). As it turned out, Waxahatchee’s live show amplifies the dynamics that were never so split apart on Cerulean Salt, like a Steve Albini production job. The quiet bits were tremblingly quiet, but the loud bits found the band rocking with a thrashy abandon that you won’t find on the record’s more manicured surface, bringing instrumental parts to their louder, logical conclusion: the deliberate drums that open “Misery Over Dispute”, the roaring guitars of “Waiting”. The title track from American Weekend blossomed into a particularly noisy denouement full of heightened guitar squalls; similarly transformed, “Be Good” closed the set with Pavement-y sloppiness.

Though, of course, the room’s stark attention never left Crutchfield herself — her wailing voice, her unassuming stage presence, and her tales of hurt and personal entanglement in song. That much seemed reciprocated. “I’m super grateful that you’re here and that we’re here,” she blushed towards the end of the set.