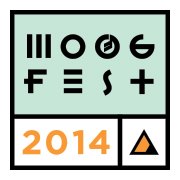 Moogfest has revealed its initial lineup for 2014. Taking place April 23rd – 27th in venues across Asheville, NC, the festival is “dedicated to the synthesis of technology, art and music.” It takes its name from electronic pioneer Bob Moog.

The festival will also feature showcases curated by recorded labels such as Warp, DFA, Foold’s Gold, and Ghostly International and music festivals like Movement and Hopscotch. There will also be daytime activities, including conferences and guest speakers.

General admission and VIP tickets are now available through the festival’s website.