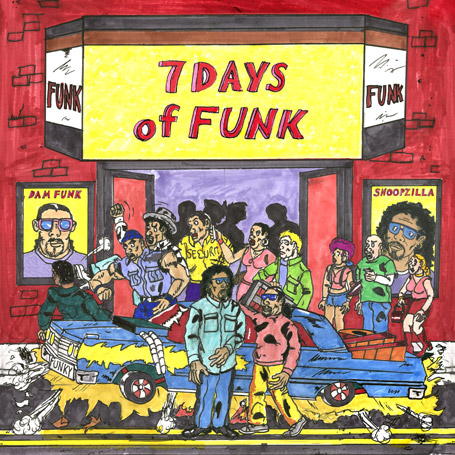 Positivity is something most normal people wouldn’t mind a little more of, so there’s no way albums like 7 Days of Funk should feel this alienating. Snoop Dogg’s collaboration with Dâm-Funk is a confident dedication to funk, the same genre that was often the sampled background for his early ’90s comeup. It all sounded fresh then, but its staleness on 7 Days of Funk isn’t necessarily due to funk’s fall from relevance. It’s because there isn’t any sort of reinterpretation of the genre’s liveliness to be found.

Instead of Eazy-E disses and reassertions of his mind being strictly on that money, Snoop Dogg questions your love for him (“1Question”) and dedicates himself to Mary Jane (“Faden Away”). The LP lacks fervor, feeling disinterested, even though you know Snoop really isn’t trying to be. In an accompanying statement, Dâm-Funk implied that the collaboration was kismet: “Snoop knew what I was thinking without me having to articulate it. That’s how you know when you gel artistically with someone.” That said, it doesn’t at all mean that they’re helping each other reach a new artistic awareness. They just happen to blend together and share similar interests, but their productivity is the musical equivalent to two longtime friends spending a Saturday afternoon on the couch.

So, 7 Days of Funk is a slog through shallow percussion (especially in the amateurish drum pattern on the Kurupt-featuring “Ride”) and drowsy synthwork. Sure, moments like the xylophone-y riff on “I’ll Be There 4 U” sound nice, but they’re rather forgettable. 7 Days of Funk is undoubtedly a funky album, but one would be sorely mistaken if they were looking forward to anything new from a rapper who doesn’t have much of a reason to try at this point in his career. The album doesn’t only feel plain, it’s disaffecting, something Bootsy Collins and George Clinton rarely were in their heyday.

Essential Tracks: “I’ll Be There 4 U”