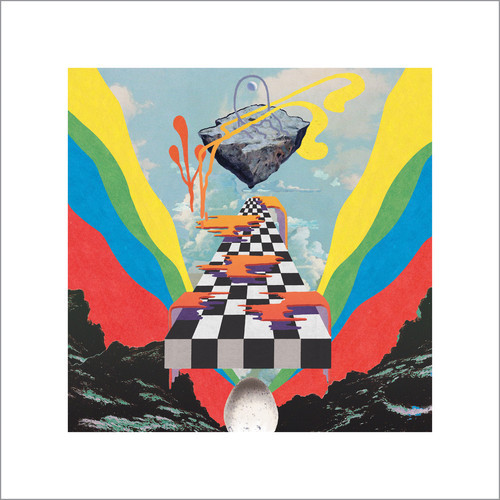 The opening one-two punch of “Trash Bed” and “Pink Elephant” boils the blood and gets the feet moving, encouraging the sort of dance floor flailing that lands somewhere between funky and epileptic. On the former, the band dizzily bounce back and forth between jumpy, shrieking fidgets and curled, furious dance punk. “Pink Elephant” stomps in on an interlocking groove of Peter Negroponte’s multivalent percussion, and Arian Shafiee and Simon Hanes’ Battles-y counterpointing guitar and bass. But this isn’t groovy math rock; vocalist Kassie Carlson yelps out barely intelligible lines about “Mary Mary quite contrary” and how she needs someone to “give me Mary intravenous” while Ian Kovac adds scrobbled dial-up tech noise. Pink elephants are traditionally associated with delirium tremens, and the woozy, skull-cracking tune wobbles intoxicatingly.

Though these five are often busy making a mess, there’s a clear intent behind every element of that clutter, whether its Carlson’s manic haranguing or Shafiee’s off-kilter jolts of guitar. Three-fifths of the band met in the New England Conservatory’s Contemporary Improvisation program (in which the aforementioned Zorn has been a visiting composer), and that deliberate chaos comes through on the twitchy “Club Kids”. Time signatures and riffs jump tracks at unexpected intervals, though no train car ever detaches from the line. Just when a hint of dance rhythm establishes itself, Teenage Jesus and the Jerks’ caterwauling acridity sinks in, a burst of Gang of Four’s tight punk groove careens into sight, or a dash of Ornette Coleman’s wild freedom. Gay Disco refuses to be controlled, contained, or defined, unfolding grandly and collapsing in on itself simultaneously.