What Your Favorite Musicians Wore For Halloween 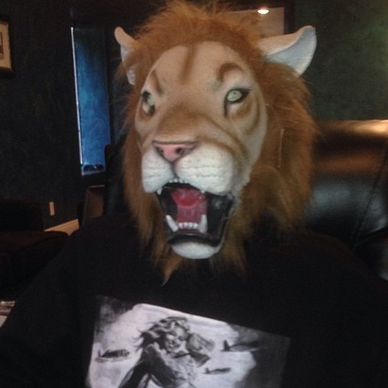 Despite the throngs of admiration they receive daily, rock stars are just like us. Case in point, they celebrate Halloween by dressing up as their favorite ghoulish creature or cultural icon. In the haze of one too many Black Devil Martinis and mini Baby Ruths, we’ve compiled the costumes of some of your favorite musicians. Some are scary, some are weird, and some are funny, but all of them prove that no one’s ever too famous to play pretend.

The Blow as Brian Eno (circa Roxy Music) and a fern:

Neko Case as a gorilla (with bearded drummer and undead farmer keyboardist):

Best Coast’s Bethany Cosentino as a Budweiser can:

Deap Vally as a pumpkin and a tiger:

Snoop Lion as an actual lion:

Fabolous as Michael Jackson in the “Thriller” video:

Jessie Ware and Mikky Ekko as Erik and Christine Daaé from a Gothic interpretation of The Phantom of the Opera:

Coheed and Cambria as the Ghostbusters:

Coolest kid ever as Drake’s Nothing Was The Same cover:

Beyoncé as an angel (who fell from Heaven):