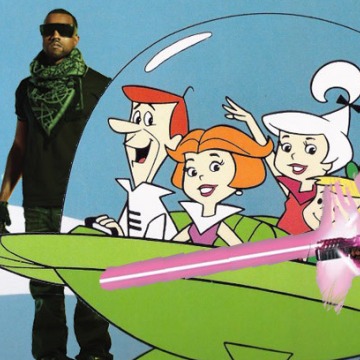 Apparently, in addition to being a musical mastermind, fashion designer, architect, and college lecturer, Kanye West is a movie and television junkie. Recently, he appeared on Bret Easton Ellis’ new podcast, where he spoke extensively about films like Pacific Rim and 12 Years a Slave, binge-watching Breaking Bad, and his own attempts at directing (e.g., the Runaway film and the “Flashing Lights” video, which he calls his favorite project). Listen to the segment in full here.

In regards to 12 Years a Slave, Kanye said, “For me, I felt like the main character in what I’m dealing with even as a mega popular rich celebrity, ‘fuck you who do you think you are to complain about anything’ situation I’m in,’ or in the past when I’ve dealt with attempting to create in other fields, or clothing.”

Best known for his novel American Psycho, which was adapted into a film in 2000, Bret Easton Ellis previously teamed up with Kanye for a spoof version of American Psycho in promotion of Yeezus. Kanye returned the favor by contributing music to Ellis’ new, Lindsay Lohan-starring film The Canyons.

Listen to part one here.

Update: Listen to part two here. It’s more movie talk, including Kanye’s role as creative director for the Jetsons movie. He also dropped a few non-film nuggets, like how the artwork for Yeezus was a casket for CDs. “This is the last time we’re going to see [CDs], so let’s have an open casket.”