Various Artists – We Are Friends Vol. 2 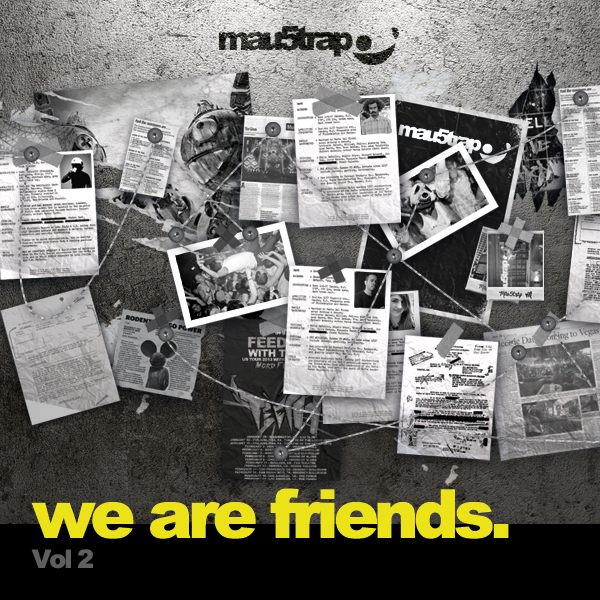 As one of dance music’s most notorious industry agitators, Joel Zimmerman (better known as deadmau5) has never shied away from sharing his opinions about the commoditization of EDM and berating fellow headlining producers. Zimmerman’s EDM “trolling” goes a few bars too far on “Your Ad Here”, the lead track from the producer’s We Are Friends Vol. 2 compilation album. Complete with advertisement placeholders, the track’s intent might be to spotlight the perceived “selling out” of other EDM heavyweights, but it only taints an otherwise compelling mix with a repugnant first impression. Aside from a stoic interlude, the track is satiated with Zimmerman’s tired kick, paired with expected abrasive synthesizer frequencies. Combined with the mundane electro-pulse of “Suckfest9001”, Zimmerman’s productions only serve as a hurdle to the more evolutionary tracks courtesy of his new mau5trap recruits.

Despite his many criticisms of the broader landscape, Zimmerman has played as big a role as any in EDM’s establishment. The producer’s famous mau5head logo be found adorning apparel throughout your local mall, and he has also helped introduce the world to the likes of Skrillex, Foreign Beggers, Chris Lake, and Feed Me. So, while Heat Maxwell is not yet a familiar name across clubland, his glitched-out take on big room electro-house, “FreakShow”, is primed to become a major force in 2014. Near the other end of the electro spectrum is the work of London’s Jame Njie, whose “In Transit” and “The Right Time” trade the instantaneous reward of big drops for nostalgic electronic interplay and emotive surges that accompany trance’s ambient waves. Eekkoo’s “Lekture” avoids the big room sound in its entirety, focusing on an 8-bit fusion of subterranean ambient-techno vibes.

Even with this diversity, this 11-track compilation still pales in comparison to recent full-length efforts by the likes of Mat Zo and Gesaffelstein. The two original cuts on this LP, however, might just be the offal of an equally appetizing forthcoming release schedule.