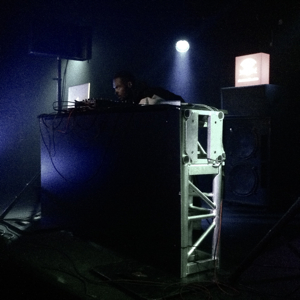 It’s always a good thing to see Chicago dancing with abandon. For whatever reason (I’m guessing the pre-concert cuisine doesn’t stray too far from New York, though pizza and drink is a bit heavier here than in Brooklyn), the underground dancescape of the 80’s Chicago House music scene eventually slipped into its winter environs to make way for grunge, and present-day movement culture in the colder months is either delegated to shifting feet in basements and dives on sponsored weekend dance nights, or provoked spontaneously by touring acts making a name for themselves, spinning and morphing the influences of multigenre dance music with heavier, formless or hybrid ideas. Thankfully, the Joffrey Ballet remains the only well-known part of Chicago dance culture anyone could comfortably call traditional or choreographed.

Actress’s set on Sunday night at Empty Bottle threw all aural-archetypal bathwater out of the window, in the same manner producer Darren J. Cunningham’s full-lengths, 2010’s Splazsh and 2012’s R.I.P., sought to do and do right by, representing the self-contained natures of those album structures. In live sets as in the recorded albums, movement is both the basis and byproduct of the phasing high and low-end to create one ongoing session spiked with somatic moments from old and new rhythmic techniques and noise tones, referencing and inverting bass and House music’s mythologized past.

The Red Bull Music Academy series has filled out into a self-prophetic progression of trends and nods in the last six months. Yes, it’s sponsored by Red Bull, as the comment-come-blasé joke rears its head at every RBMA event I’ve attended so far, only to be drowned out immediately by the decibels produced by curators and marketers smartly using a commercial opportunity to frame some of the best bills and conceptual ideas in unique spaces (“Drone Activity in Progress” brought me to Flushing, Queens back in May and attracted weeknight throngs to an enormous, isolated space for noise acts including Pharmakon, Noveller, Kid Millions, Alberich, Prurient and Vatican Shadow, Kim Gordon’s Body/Head, all in separate darkened wings of the venue, distorting and converging into a looping Warhol film screening in the blacked-out center atrium).

Stage production for Chicago openers Parris Mitchell and Innerspace Halflife hit all the right lighted disco balls and stage-edge dancing, but after an equipment check, the only thing visible for Actress’ set time was a laptop, smoke machine, and Red Bull’s glowing red radio sign. Cunningham wanted to be obscured, or ready on the ground without the comfort of a chair, face behind the screen and getting any bearing by the knobs. Not that anyone could see through the smoke, or that there was otherwise much exterior visual to see, pushing everyone to dance with abandon rarely seen for so many kids in jackets and sweatshirts, nodding and weaving without missing a single shifting beat through the layered two-minute modulations of the set.

While the show carried familiar album stems bleeding into new sounds definitely not appearing on the debut Hazyville LP, without any merch table or announcements, aside from the feminized Siri-esque chirps of the Red Bull Radio between sets, it remains to be seen if this night was a reveal of promised new material. Though the sometimes-impaired influence of trope-conscious production culture dipped in and out with a few unintuitive manual fadeouts (done unironically and lo-fi with volume controls), Cunningham’s familiar stems and inventive live manipulations otherwise hit every improvised loop in the manner his packed venues have come to expect, and will keep coming back to for as long as Cunningham keeps producing, playing and releasing sculpted, dark and gaseous material under the Actress name. Judging by the strength and relentlessness of the set and the visible diversity in last night’s discerning crowd, there’s room for a live massive following within the ever-evolving internal space and exterior limits that Cunningham’s output continues to expand, contract, shape and redefine — if he wants it.