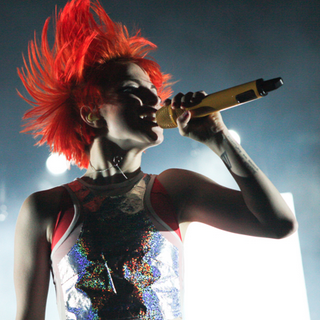 Paramore, Metric, and Hellogoodbye invaded Seattle’s Key Arena last night for their tour kickoff. It proved to be a night filled with powerful frontwomen as Emily Haines and Hayley Williams shared the stage alongside Hellogoodbye’s notorious quirkster Forrest Kline. The crowd in the arena was noticeably scanty, but that didn’t deter the diehard fan girls from unleashing a deafening shriek when Williams, Jeremy Davis, and Taylor York finally came out. And while the three remaining members of Paramore might not look like they’ve aged since their rise of fame in 2005, their live shows certainly have. The only thing missing from their high-energy performance were the pyrotechnics, though Williams’ iconic red-bob sufficed enough.

Photographer Allyce Andrews was on the scene, and you can get an exclusive first row peek with her gallery below.