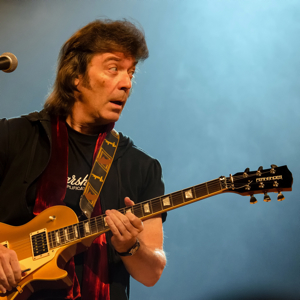 Legendary guitarist Steve Hackett brought his sold out Genesis Revisited Tour to the Scottish Rite Theater in Collingswood N.J. Sunday night. The venue is less than 15 minutes from Philadelphia, so it’s no surprise his shows sell out consistently in this region. The area was one of the first to embrace the progressive rock movement in the early ’70s, which included other bands such as Yes, Emerson Lake and Palmer, and Pink Floyd.

Genesis was an early force in the movement and Steve Hackett was an integral part of their early success. His career has spanned over 40 years and after leaving the band in 1977 he spawned a successful solo career and co-founded the supergroup GTR with Steve Howell of Yes. In 2010, he was inducted into the Rock And Roll Hall of Fame as a member of Genesis.

Last night’s performance featured classic tracks from albums such as Nursery Cryme, Foxtrot, Selling England By The Pound, The Lamb Lies Down On Broadway, Trick Of The Tail, and Wind And Wuthering. He started off with fan favorite “Watcher Of The Skies” and from there it was simply a night of goosebumps, from the female-friendly “Afterglow” to the fun sing along of “I Know What I Like In Your Wardrobe” to the rousing finale of “Los Endos”/”Sqounk”.

Not a bad way to spend a Sunday night.