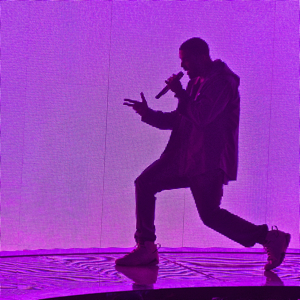 Drake is a hydra. The minute you cut off one of his heads, two more grow in its place—challenging and snapping at the image of him you thought you had. Last night, when he performed at Brooklyn’s Barclays Center alongside openers Future and Miguel, this was more clear than ever before. I’ve had a love/hate relationships with Drake for a long time, I can remember listening to “Forever” on repeat when it first came out, before he was anybody really and I hadn’t even graduated college. Now, he’s playing Barclays and I’m a journalist; we’ve both matured — and not — in our own ways.

Working strictly off his show last night, booking Future and Miguel as openers on the tight-lipped, smugness of the “Would You Like a Tour?” strut, we see a musician who knows the climate. But also, a star who is vain, deeply flawed, and insecure. The drama with Future being dropped from Drake’s tour was more than just a mindless tiff but almost indicative of Drizzy’s mental state toward the rap game. Despite the fact that Barclays was only half full when Future took the stage around 7:30 p.m. on Monday night at Barclays, the Atlanta rapper still brought enough energy to prove why Drake has been wary of the Auto-tune aficionado. After Future called Drake’s latest, Nothing Was the Same, an album “full of hits but it doesn’t grab you,” he was allegedly dropped from the tour for a hot minute. But Drake seemed to realize that this move made him look weaker and subsequently brought Future back out in the middle of his set to perform his break-out hit “Same Damn Time”, taking the time to reestablish their relationship.

Miguel has always been his own package and should be treated as such. At Barclays, as always, he posed no real threat, employing an elaborate stage setup without much heart or originality behind the lit-up boxes or drawn out guitar solos from the full band. Actually, Miguel delivered a pretty lackluster show. I doubt he’ll ever headline Barclays, Future had twice his charisma and when Drake finally ascended the stage, around 10 p.m., Miguel seemed like a pawn in the game.

If hip-hop is indeed, a game, like the guys love to call it, then Drake is winning. But what do we lose when a megalomanic superstar wins? I’m consistently surprised by how much hate Kanye receives while Drake garners relatively little. Perhaps it’s because Drizzy doesn’t challenge the status quo in the ways Kanye seeks to. In fact, Drake perpetuates the status quo whenever possible, and that’s one of my major problems with him — which isn’t to say the show wasn’t enjoyable. He opened with Nothing‘s first track “Tuscan Leather” the Drake-glorying-in-Drake and launched into a healthy mix of old and new music with celebratory ad libs. He called the concert his birthday party since he had just celebrated a few days before. Dancing and singing—pitch perfect at that—Aubrey pranced around the titled, lighted circle that made up most of his stage with something akin to joy. He’s a masterful performer.

In continuation with the party theme, he brought out Busta Rhymes, who sprinted through “Put Your Hands Where My Eyes Can See”, and later had Jhene Aiko out to sing her part of “From Time”. He also took the time to explain, for those who didn’t know, that the line “you deserve rounds tonight” is synonymous with having sex several times in one night. Huh, this whole time I thought it just meant they were going to have a lot of drinks together. Taking a short intermission after Aiko appeared, his DJ Future the Prince shouted out to all the loyal Drake fans, playing early favorites like “Forever” and then switching gears to play about a minute of the brand new song called “Trophies”, a track that’s driven by a brassy trumpet sample.

The moments where the show lost me, and even disgusted me, had nothing to do with music, though. After the intermission, it felt like superstar Drake was replaced by 26-year-old bratty millionaire Aubrey, and when he returned to the stage with “Hold On, We’re Going Home”, he also brought up a fan to sing the chorus to her. I’m sure most people saw a girl getting the chance to meet her idol—which certainly seemed true—but I also saw a man objectifying a young girl in front of a crowd of thousands. He asked if she was Dominican, commented on her great “lower back”, and even talk-sang “you can’t say no, you can only say yes” to her, a line that’s fairly akin to celebrating non-consent.

Continuing the crowd interaction portion, Drizzy vaulted onto a circular, metal catwalk that was brought down to the stage and then raised above the crowd. While singing “305 to My City”, he proceeded to both shout out and critique the audience. But his behavior crossed out of even “Worst Behavior” territory and spun off into mean girl pretty quickly. I was appalled that a superstar mocking male members of his crowd for wearing suits or being too ugly for their girl is an acceptable thing. Sexually accosting women in crowds is pretty par for the course, but his precision and individual statements made the act that much more transparent. Do we still think that women only attend shows in the hope of sleeping with the performer? Do women still do this? Why do we perpetuate this awful caste of sex object and superstar? But all the blame for this phenomena cannot fall on Drake’s toned shoulders. Like Molly Lambert so eloquently wrote about Kim Kardashian the other day, how much of this is Drake’s fault and how much is the culture’s?

After this section was finally over—most of the audience had sat down at that point and lost all energy—Drake closed out the show by inviting the local crew out. ASAP Ferg first hit the stage to perform “Work” and then requested that he get to play “Shabba” too. Drake agreed and the entire ASAP Mob flooded the stage for one of this year’s only good summer rap songs that didn’t involve Drake somehow—now it kind of does. Leaving ASAP Rocky onstage with him, Drake called him the “biggest superstar to come out of New York for a long time” and they each performed their verses from Rocky’s posse hit “Fuckin’ Problems”.

And by the time Drake was closing out the two-hour long show with “Started From the Bottom”, it was easy to see how this slightly nerdy Toronto television star became the hip-hop mogul that he is. Drake is a beast and part of his appeal is his ability to morph and change. He was unafraid to share stage time with old and new performers, he seemed completely himself onstage whether it was world class artist or millionaire bully—and his fans seem to love both sides of him. I’ve had my issues with Drake but after finally seeing him live I had to admit, he got to the top for a reason.