The Head and the Heart – Let’s Be Still 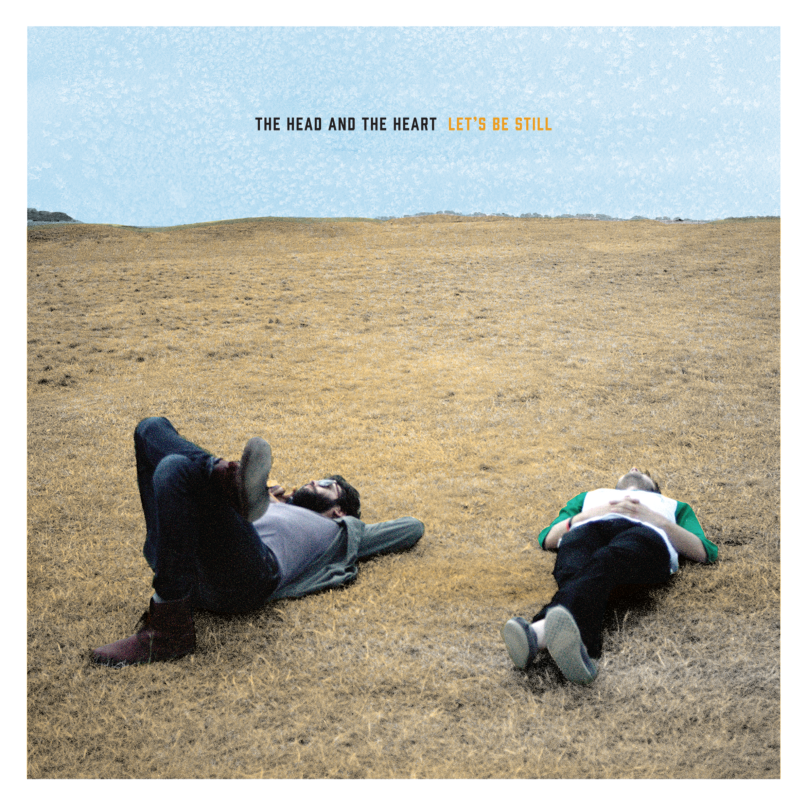 When The Head and the Heart self-released their debut album back in ‘09, who could’ve guessed they’d sell over 10,000 copies by word of mouth alone? That got the attention of Sub Pop, the label who snatched up the Seattle band and sent them on tour to seek their fortune. The title of The Head and the Heart’s second LP, Let’s Be Still, can be read as an appeal for respite following two years of relentless touring. The same goes for the album’s idyllic cover photo, which has two band members sprawled atop raw sienna grass, gazing up at a clear blue sky. It’s a rare moment of peace for the young folkies, a well-earned rest following their interminable string of gigs.

According to frontman Josiah Johnson, Let’s Be Still is “imbued with the experiences of traveling the world…a snapshot of a band that didn’t exist just four short years ago.” Johnson credits touring with groups like Iron and Wine, Death Cab for Cutie, and Dr. Dog for inspiring The Head and the Heart’s expansion into “new sonic spaces.” Guitarist Jonathan Russell, having been struck with the urge to go electric while opening for My Morning Jacket, agrees wholeheartedly: “I’m sick of just strumming my acoustic guitar.” Let’s Be Still benefits tremendously from this expanded and diversified approach, as the Seattle sextet experiments with groovy electric guitar riffs, coruscating synths, and deft time signature shifts that keep the listener off balance in all the right ways.

Throughout the album, The Head and the Heart stress that, although nothing is permanent and life in 21st century America is a hectic blur, we can prolong what’s worth cherishing by taking our foot off the accelerator, if only for a moment. The title cut spells this out explicitly, as the band cautions, “If we don’t slow down soon things might not last.” This plea for recess from a world “spinning a little too fast” conveys a sentiment with which frazzled Millennials can easily identify. “These Days Are Numbered” channels a similar perspective, as Charity Rose Thielen bemoans the finality of life in begging for a warm moment with her sweetheart. And, on wistful “10,000 Weight in Gold”, the band looks back on a broken family to highlight how folks assign nonpareil value to the things they’ve lost forever.

Although slowing down can liberate from the shackles of hurried, workaday lives, it can also enhance the anguish of growing apart from the ones we love. Some things ought to be drawn out and savored, while others are best dealt with expediently, or even evaded completely. To avoid paralysis and decay, we must sometimes blind ourselves to past and push onward as quickly as possible.

Opening track “Homecoming Heroes” is Springsteen’s “Glory Days” turned on its head. Backed by a shivering string section, the lyrics spurn fleeting victories and “the wave of their flag.” Rather than dwelling on past conquests and yellowing local newspaper headlines, it gets turned back on them (“I duck into alleys, I avoid the rallies/ It’s a choice of my own”). On “Gone”, the protagonist implores an ex-lover to repossess pictures and postcards so he can free himself of his antecedents. Putting forth a Herculean effort to trudge onward, Johnson, Russell, and Thielen all moan and groan amidst doubters and skeptics, “I’m tryin’ hee-ah/ Aw I’m trying here/ And fuck what they’re saying.”

Compared to their eponymous debut, Let’s Be Still leans more heavily on pop ditties, which enliven and invigorate the album. Lead single “Shake” features a rippling bass, peppy clapping, and jaunty piano spatters. “Summertime”, a sprightly number complete with punchy percussion and ebbing synths, finds Thielen laying her health on the line to woo a would-be beau. Snappy and coquettish, she offers to go into coal mines for love (“I will sing as your canary bird/ Take my soul and bury it in the earth”). As the drums threaten to drown her out, Thielen redoubles her efforts with skirling yelps and her sultry, soulful power repetitions of the title.

The Head and the Heart also broach a few topical issues this time around. “Another Story”, penned by Russell in response to the Newtown shootings, is an attempt at catharsis following the tragic and confounding killings at Sandy Hook Elementary. Spry number “My Friends” has the band leaning on comrades to bolster their faltering faith in love, god, and politics (“If everyone had rights/ Would anything go wrong?/ Would there even be a need for these politicians’ songs?”), apropos for a country with no Government.

Despite the band’s creative advances, most of the LP’s 13 cuts adhere to the same basic formula. Their songs begin sparsely, ride a steady instrumental build, peak with gorgeous harmonies, and conclude with a soft fade. That said, The Head and the Heart are at their best when breaking free from this rubric. The pedal steel guitar of alt-country waltz “Cruel” and blooming organ on “Fire/Fear” shine, while the folksy harmonica of “These Days Are Numbered” sounds like it could’ve been recorded at Big Pink.

When The Head and the Heart landed on Sub Pop, many dismissed them as one-trick ponies. Sure, they had fantastic vocalists, but Let’s Be Still proves the Seattle band is more than just a crisp set of pipes. Here, they draw upon lessons gleamed from touring with veteran groups, tinker and tweak their sound to the tune of fresh instrumentation and unconventional timing, and stick their toes in the swampy morass of sociopolitical commentary. And, in flashing the confidence to step outside their comfort zone of folksy harmonies and Guthrie-derived lyrics, The Head and the Heart insist they’re moving forward, not being still.

Essential Tracks: “Shake”, “Let’s Be Still”, and “My Friends”