Drop Electric – Waking Up to the Fire 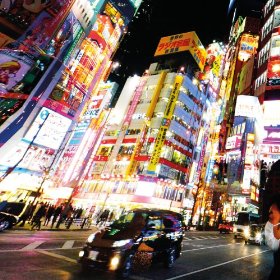 Drop Electric’s music likes to creep around its own beauty. The DC band’s Lefse debut, Waking Up to the Fire, settles into more concrete shapes than their earlier self-releases. While Drop Electric’s first LP Finding Color in the Ashes stuck closely to an early-aughts post-rock mold (think Explosions in the Sky or Hammock with a few extra electronic flourishes), Fire hones in on details instead of cruising along broad strokes. Kristina Reznikov’s vocals now take the front seat on nearly every track, dialoguing with a menagerie of eerie synth textures and a rhythm section that largely stays rooted in the band’s beginnings. The album exploits the tension between traditionally pretty indie pop tropes—glockenspiel and keyboards that “sparkle”—and uncomfortable finds from the uncanny valley.

Take the title track, which starts on a low groan seemingly harvested from an old Casiotone or some other outcast toy. It’s a lo-fi timbre imported into a lossless setting; it dares you to find the dust in its flat notes. Somewhere between an organ and an artificial voice, it hangs at the back while Reznikov chases her own voice into a vocoder. She seems to be competing for perfect artificiality as she hits the sweet spot that confuses what’s human and what’s coughed up by a machine. The song sounds upbeat, but there’s menace behind its glitter.

Even in the midst of the album’s strongest vocal performance, Reznikov’s organic vocals get beaten back by digital manipulation. “Blue Dream” almost gets her snarling only to finish each line of the chorus with a flipped sound byte. At the start of each bar, something that’s either a real human cry or a machine’s best impression wails in the background. The song’s climax chops up the vocals beyond recognition; even unprocessed, the lyrics are hard to make out, and here there’s no hope. On “Starfox”, Reznikov fills the air around a Dntel-style glitch beat with the most patient phrasing on the record, hollowing out a calm eye in the jitters beneath her.

Despite its title, the instrumental “Among Dying Dreams” seems to close the record on a hopeful note. Squirming loops and distant drones break away to blasts of horn and piano, like the fire that smokes you out of your sleep. At the end of this frosty, uneasy world, that fire feels less like danger and more like a call to adventure.

Essential Tracks: “Waking Up to the Fire”, “Blue Dream”