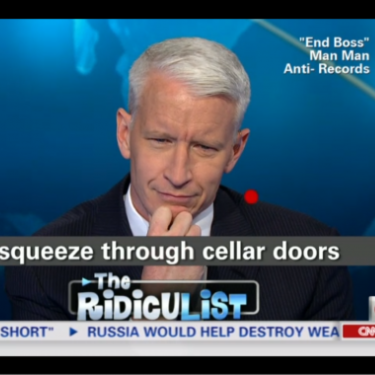 CNN news anchor/patron saint Anderson Cooper may not know what cool whip is, but he sure does know his indie rock. On last night’s episode of Anderson Cooper 360, the silver-haired fox devoted the entire “RidicuList” segment to “introducing us to the stylings of a band called Man Man.” What are you listening to these days, Christiane Amanpour?

Cooper’s fascination with the Philly psych-rockers began after he heard that On Oni Pond’s “End Boss” is actually about his colleague Wolf Blitzer and not your “typical lupine indie rock imagery” of a vodka-drinking, baby-eating wolf. So, Cooper went right to the source, frontman Honus Honus, who revealed in a pre-taping interview that Blitzer’s kindly persona served as the song’s inspiration:

“I thought it’d be more interesting to re-imagine the wolf being Wolf Blitzer sneaking into houses and devouring children… Just picturing Wolf’s calm face, kind eyes, smiling gray beard shooting pool in a Barrio bar with a baby dancing in his belly, while dreaming of a young Glenn Danzig and drinking lemon flavored vodka, still gets to me.”

As glorious as the truth may be, Cooper somehow steals the show. Between his face while discussing the lyrics, the inference that he’ll steal Honus’ Blitzer-emblazoned tunic, and the inevitable images of a shirtless Cooper rocking out at the band’s next show, it’s enough to make you think CNN’s a viable news source with their finger on the pulse of modern culture. (Well, OK, maybe not all the time.) Watch the replay below.