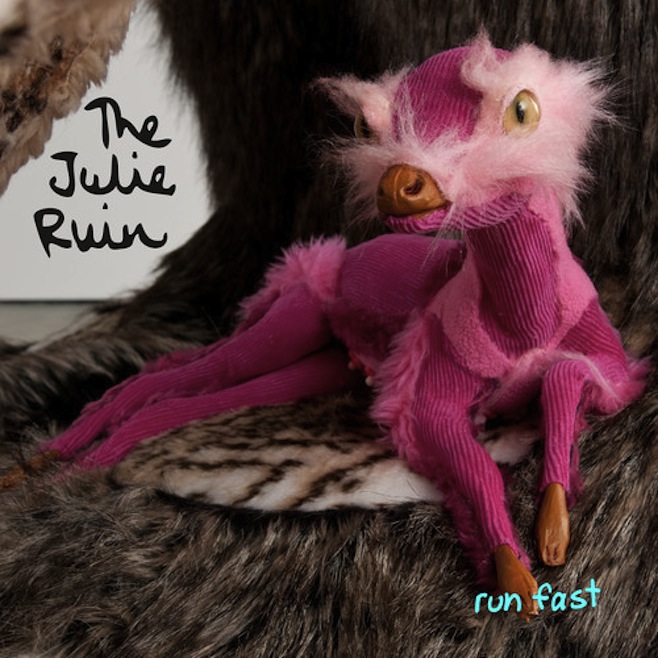 Though she might not have had the high profile of some of her male contemporaries, Kathleen Hanna has proven to be one of the most consistently important, challenging, and powerful figures from the ’90s alternative rock scene. Her iconic voice provided the rallying cry for feminist issues, the fun-loving, rambunctious work of both Bikini Kill and Le Tigre powered by her intelligent, fierce, captivating persona. However conflicted, Hanna stood at the vanguard of the riot grrrl movement, her music empowering audiences while also providing them with some seriously lively tunes.

But Hanna has been noticeably absent for a while, ever since the 2006 announcement of a Le Tigre hiatus. It’s since been revealed that she’s been dealing with a long-undiagnosed case of Lyme disease and is just now finally ready to return to the spotlight. To do so, she’s reclaimed the name under which she recorded a 1998 solo record, this time expanding to a full band and adding a The: The Julie Ruin.

Run Fast straddles the line between debut and the latest from an established act. The brassy punk sing-alongs and bouncy, synth-flavored anthems recall a fair share  of Hanna’s catalog. The laser-blast synths and confrontational fun of “Ha Ha Ha” echo Le Tigre pretty accurately, while the razor-wire jangle of the guitar hits closer to Bikini Kill. Lines like ”you’re a road block, dressed like a solution/ An ambush with no ammunition” could fall on either side of the fence.

This isn’t just a victory lap for the return of a hero; there are interesting new wrinkles to Hanna’s songwriting and style as well. The swanky piano, bongos, and Bowie-esque male backing vocals on “Kids in NY” are the perfect complement to Hanna’s wonderful mockery of the perpetual self-interest and gentrification that plague her Big Apple home (not to mention everywhere). The  sock-hop twist of “Just My Kind” places Hanna in a true-blue love song, her vocals reaching smoky whispers instead of their typical grit as silken girl group harmonies further the mellow.

That said, no one would mistaken this for an album by anyone but Hanna, and it’s not just because of that voice (though, but seriously, that voice). “Brass buttons on like you’re going to your trial/ Say it on the beat in the new girl style,” she roars on lead single “Oh Come On”, arching and scowling all over the track. It would be easy to say that the song sounds directly influenced by Sleater-Kinney if Hanna hadn’t been doing her thing prior to that Portland outfit’s formation. Hanna’s brash leads meld with sweet harmonies, ripping guitar, and pounded beat to keep things tense and taut, her insistence to “make it popular but still say it with a pout” a sardonic taunt to the rules placed on women in the music world. The  list of things that girls like and do on “Girls Like Us” sits almost too easily in Hanna’s sweet-spot, denying gender pigeonholing with its increasingly obtuse lines, from “girls like us like cotton candy” to “girls like us eat salt for breakfast.”

Run Fast captures highlights of Kathleen Hanna’s past, though it never dwells in them. This is no nostalgia trip, but rather the work of an artist with such a focused, studied voice (both literal and figurative) that she can’t help but sound like herself to some degree. That could put The Julie Ruin into direct competition with Le Tigre or Bikini Kill for some listeners, but Run Fast is, in the end, its own artifact, and a strong one at that. The album’s 13 tracks hit some serious highs and a few middling snags, but that’s to be expected from a band’s debut, even if that band features a modern day hero like Hanna.