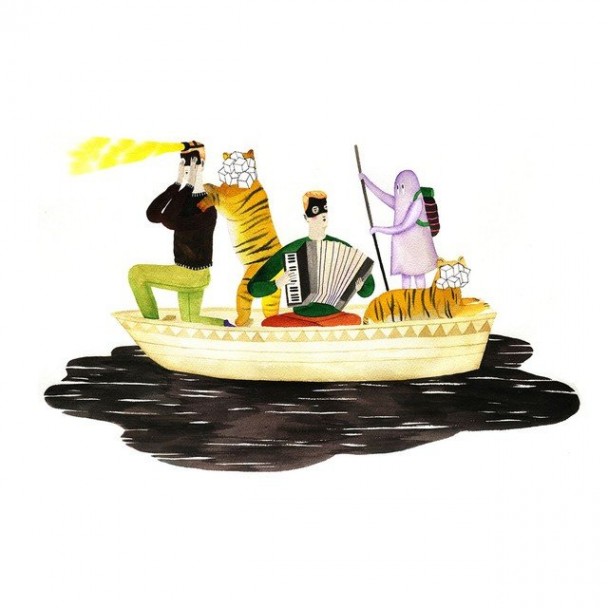 There’s something weirdly delightful about the juxtaposition of Man Man frontman Honus Honus’s gravelly, metallic voice with the ukulele lightness of songs like “Deep Cover” from On Oni Pond, the band’s fifth studio album. “The heart is a motherfucker, I’m positive of that,” Honus sings. This is a man who’s not afraid to tell it like it is, or at least as he sees it, which in his mind is the same thing. The work is, in classic Man Man style, sometimes brutal and sometimes peculiar, but it always accomplishes exactly what it sets out to do: possibly to unsettle you, but definitely to make you reconsider the conventions of rock music as you’ve known them.

Drawing on the experience of Saddle Creek producer and longtime Bright Eyes member Mike Mogis, Man Man have refined their weirdo sensibilities and eased some of their wild tendencies in favor of tightly composed, emotionally powerful narrative. Fifth track “King Shiv” is undoubtedly dark, even as it makes you smile at the cleverness of the lyrics and how easily they roll off Honus’s tongue. “Can you even recall the times before your pheromones took your common sense hostage and left you in the rain to dry?” he sings, seemingly without breaking a sweat. Then, as the lyrics register: come to think of it, no, I can’t.

“Born Tight” is the complicated charmer that sends you on your way. “Mama, mama, mama, mama, can’t help you now,” Honus sings, like the soundtrack to some demented sock hop. Where once they manically beat you over the head with their eccentricities, Man Man have developed a subtle hand, allowing the elements to envelop you slowly. Ultimately, you’ll get as much out of On Oni Pond as you put in; you might find yourself putting it on as background music, then letting other tasks fall by the wayside as you try to decipher how these little ditties pack so much punch.