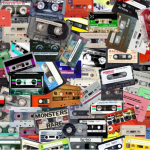 This week’s countdown sees the return of seasoned artists (PJ Harvey, Drake, MGMT, Lightning Bolt) as well as some rookie debuts (Diane Coffee). One thing’s for sure: This is one of the most diverse weeks ever for “MP3s”, with everything from spiraling noise rock to pure R&B bedtime music.

The latest release in the Adult Swim Singles Program comes in the form of Lightning Bolt’s “Barbarian Boy”, an exercise in anxious percussion and sonic chaos. To be fair, most Lightning Bolt songs are chaotically percussive; however, this one is tighter and punchier than their typical krautrock-inspired experimentation. Frontman Brian Chippendale hollers his way through abrasive feedback, and his appearance here marks his first with Lightning Bolt since he began concentrating on side project Black Pus. –Jon Hadusek

It’s not easy being green, but after dozens of all-day jam sessions and assistance from Wilco frontman Jeff Tweedy, White Denim have rediscovered the magic rushing through their guitar amps. Tweedy’s involvement peaks through the track in its starting seconds of “Pretty Green”, resembling rock jaunts similar to Wilco’s Summerteeth. The band stays true to their guitar dominance as their guitar strings ring from gentle pacing to aggressive downstrokes. They detail their listeners of the struggles they’ve conquered with an uplifting demeanor, influencing others to keep “looking up, looking out” for better times to come. The band’s fifth album, Corsicana Lemonade, is out October 29th via Downtown Records —Sam Willett

The Foxygen camp has been prolific lately, with the band releasing its sophomore LP earlier this year and frontman Jonathan Rado recording a soon-to-be-released solo album. Now, drummer Shaun Fleming (who performs under the moniker Diane Coffee) is getting in on the creativity; his forthcoming solo debut, My Friend Fish (out October 29th via Western Vinyl), was crafted in a NYC bedroom, not unlike Foxygen’s DIY four-track recordings. Lead single “Hymn” echoes the Bowie-ish album artwork with glammed-out buildups, gospel choirs, and heart-on-sleeve brooding. Fleming’s thin falsetto is placed tactfully amidst the lush arrangement. –Jon Hadusek

MGMT’s “You Life is a Lie”, the first single off their self-titled third LP (9/17 via Columbia), opens with bolstering distortion and lifts collective vocal harmonies to resemble the zaniness of The Flaming Lips. The track spitballs through a number of obstacles and revelations of fake living provided by frontman Andrew VanWyngarden, whether it’s your creepy wife or losing your friends, and climaxes with nonsense electronics scattered before its final verse. Taking hints from this single, their upcoming album is going to be quite the trip. Then again, wasn’t that to be expected? –Sam Willett

As soon as “Maxim’s 1”, the newest single from Julia Holter‘s upcoming album, Loud City Song (8/20 via Domino), exits its mysterious introduction, a new confidence flourishes the palate. Instrumentation, defined by improvised violin sweeps and dominate piano chords, capitalize on an array of layers, and her vocals escape the chaos with profound clarity. Instead of relying on these effects, she plays with her natural tones, surveying whispers along its bridge and mastered vocal hums underneath its chorus. Holter’s experimental new approach fills musicality in segments that comfort and challenge your ears simultaneously. –Sam Willett

Arguably the most underrated emcee of the Black Hippy collective, Ab-Soul is a conscious rapper with a knack for the sociopolitical, as proven by his latest single, “Christopher DRONEr”. You might recognize that name: Droner was the crazy-ass LAPD cop who shot a bunch of people last year. Ab uses those incidents as a launching pad for some of the angriest verses he’s ever written, condemning the U.S. government and oppressive social issues (the two aren’t mutually exclusive in his eyes). “The SWAT team got robots and I’m thinkin’ ’bout coppin’ mine,” he spits. “Literally, fuck a pair of shoes, I’m cockin’ nines, yeah you to shoot.” –Jon Hadusek

Beal’s take on Del Rey’s recently uncovered demo “Black Beauty” is both sultry and sensual; unlike the rest of the music industry, Beal seems empathetic toward indie-pop’s most polarizing starlet. Sampling parts of Del Rey’s vocals, Beal moves from romantic compliments to more constructive criticisms: “What can I do/ Life is pitiful/ You don’t have a clue”. It’s as if he’s trying to converse with her through song.–Jon Hadusek

Cage the Elephant’s return to music has surfaced the outfit’s grooviest efforts yet. “Come a Little Closer” instantly grabs t-shirt collars and reels listeners into an adventure filled with catchy bass lines, various tempo changes, and sonic guitar effects. Matt Shultz’s playful vocal character doesn’t make as much of an appearance, but, instead, he challenges his range with falsetto croons and casual lyrical steps across its verses. Cage the Elephant’s newest pursuit sounds larger than ever before, cuing their popularity to potentially reach new heights. Look for their new album, Melophobia, in the fall. —Sam Willett

Drake’s flourishing fame is directly correlated to the fantastic (and well-chosen) singles he continues to release. His latest, “Hold On, We’re Going Home”, is a hazy disco track with a strong backbeat and a warm atmosphere. “Just hold on, we’re going home,” Drake croons. “It’s hard to do these things alone.” It’s a sex song, obviously, and a damned smooth one at that. Stick it on that playlist right after Daft Punk’s “Get Lucky”. –Jon Hadusek

PJ Harvey’s protest song “Shaker Aamer” follows a perfect formula to grasp listeners’ attention- a lo-fi set of guitar strums of drums cracks that place a megaphone over lyrics with grunting irritation. Harvey commends the bravery and strength of “your friend” Shaker Aamer, a brave UK national who has forgone multiple month hunger strikes and a lengthy prison sentence without being charged. Harvey simply spells out these nonsensical consequences with her timid and powerful croons, instantly sparking a furious anger inside of her listeners, especially this writer. –Sam Willett