Lady Gaga and Katy Perry: Who Will “Roar”? Will There Be “Applause”? 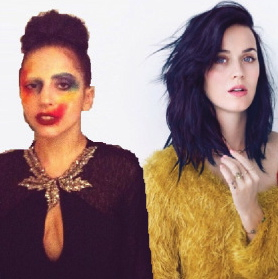 Welcome to Answering Machine, a new weekly column where Editor-in-Chief @michaelroffman will voice his opinion on the week’s biggest stories, which might include new music, various controversies, and publicized conflicts like today’s inaugural piece on Lady Gaga and Katy Perry. He’s likened this to a Town Hall discussion of sorts, so please feel free to voice your own two cents.

It’s about nine in the morning on a Tuesday. In my short 20-minute trip to FedEx, ruffled hair, foul breath, and all, I’ve already encountered Katy Perry three times. The first was a Twitter update sent to my phone, the second was a casual glance at someone’s iPhone in the window of Caribou Coffee (he was listening to “Roar”, no lie), and the third was the lovely cardboard cutout at CVS advertising Pop Chips. I’ve never tried Katy’s Kettle Korn — even when she was hocking the flavor dressed as Elvira last Halloween — but I’m sure I’ll conditionally (or innately?) grab a bag between now and the release of Prism. Why? I’m wired that way; I’m a kid of the ’80s, when the color neon made me think, I need to go and buy a Ninja Turtles toy.

That’s why I’m not too fascinated with the debate between Perry and Lady Gaga. (A statement bleeding with hypocrisy since I’m writing an op-ed piece titled, “Lady Gaga and Katy Perry: Who Will ‘Roar’? Will There Be ‘Applause’?”, I know.) These artists are two of America’s strongest brands in pop culture — the Walgreens and CVS of pop, if you will. Whatever happens, both will stay open 24 hours, and there’s more than enough room and interest for either camp. I’m fine with that, especially since both singers soundtrack my weekly trips to the gym, and there probably hasn’t been a month without at least one listen of The Fame Monster, Born This Way, and Teenage Dream.

Still, here’s the situation at hand: Two sweltering, big-budget hype machines are huffing and puffing at the same time (side by side even), attempting to draw interest from pretty much the same demographic. Sorry, Gaga, who tweeted yesterday, “Let’s make 2013 a year where music/talent/artistry is more important than gossip/fanwars I respect all fanbases 4 their passion #BeTheChange,” but your pleas aren’t going to stop anyone, or even yourself, and that’s because it’s just not good press. Rivalry draws interest from those who aren’t even interested in the first place. I think back to Fall of 2007, when 50 Cent and Kanye West were battling for the top of the charts, a story that non-hip-hop aficionados were excited to follow. C’mon, this is America, where rivalry is about the only thing that sells anymore. What’s more, if that was something the meat-wearing pop star wanted to avoid, she’d wait for “Applause” a week or so later.

It doesn’t really matter, though, as even Billboard projects over 400,000 downloads, streams, purchases, what have you for either candidate. Sure, that number one spot is a diamond trophy, but for how long? The public conscience can’t even remember last season’s American Idol winner, someone they collectively championed for months, let alone a small trophy as #1. At the end of the day, both parties will walk away with more fans and endorsements, or take part in art installments and more chip flavors. The real debate, however, lies in exactly what Gaga wants us to focus on: “the music/talent/artistry.”

Okay. Fine. Let’s start with the The Fame Monster herself. I’ll be frank, I don’t really like “Applause”. I think it’s a confused club banger that, once again, draws comparisons to Madonna. Not early Madge, as “Born This Way” echoed, but something as recent as 2008’s Hard Candy. “I wait for the applause/ applause/ applause,” Gaga robotically intones, sounding even more like the Material Girl with her melody of “Way that you cheer and scream for me…” line. It’s sort of baffling how uncharacteristically banal this sounds, from the meek and puzzled verses to the literal use of an applause .wav file. Given Gaga’s torturous process to get here, which includes the financially tragic cancellation of this past year’s tour, and the artistic context surrounding ARTPOP, I guess I just expected more. Especially after that leak of “Burqa” (or is it “Aura”?).

Perry, on the other hand, just wrote the NBA’s new anthem. Expect to hear “Roar” over cascading videos of LeBron James dunking, Kevin Durant sweating, and Derrick Rose shaking his head. Or, as Alex Young tweeted, “I imagine ‘Roar’ is going to soundtrack aplenty of tween movies over the next 10 years lol.” It’s the perfect single to follow up the multi-platinum behemoth that is 2010’s Teenage Dream. The beat that sort of, kind of, maybe echoes Jay Z’s “Empire State of Mind”, the nu-gospel ego chorus (“You’re gonna hear me roar”), and Perry’s persistent knack at carving out layered, sticky verses that require Goo Gone on every play. While there are echoes of reused melodies from Perry’s past at work, specifically “Teenage Dream” (as my fiance pointed out upon first listen), it’s not nearly as egregious as, say, Gaga disassembling Madonna. That’s probably because it actually sounds like Katy Perry, which naturally is a plus.

But let’s not compare. Not because I’m trying to #BeTheChange, but simply put: It doesn’t matter. As I’ve said again and again, both parties will come out clean, sell millions of copies, and continue their climb to the top. How do I know that? Well, I don’t for sure, but if the past’s to be considered, anyone’s predilection for Gaga or Perry hasn’t had an impact on their respective career arcs. For Christ’s sake, I downloaded both tracks on iTunes and just spent my morning lambasting one of them. Will my opinion change towards either song? Probably not. Will each song’s iTunes play count keep climbing in my library, though? …probably.

Look, as a 29-year-old luddite, I’m pretty sure I’m not what executives might call “statistically relevant.” But mark my words, fans will roar and applaud this fall, and yes, I’m closing with that idiotic line.