Video: Justin Timberlake and 'N Sync reunite at the VMAs 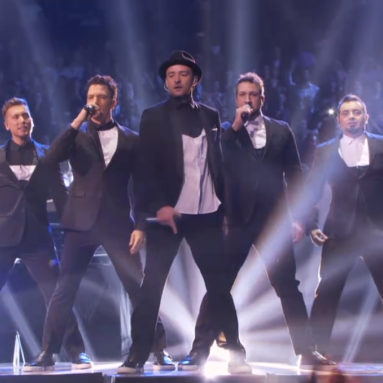 Well, it happened: N Sync reunited for their first performance since 2004 at the MTV Video Music Awards in Brooklyn Sunday Night.

Justin Timberlake began the performance with a medley of his own hits, including “Take Back the Night”, “SexyBack”, “My Love”, “Cry Me A River”, and “SeÃ±orita”. He was then joined by the rest of N Sync — J.C. Chasez, Lance Bass, Joey Fatone and Chris Kirkpatrick — for “Girlfriend” and “Bye Bye Bye”. Justin concluded the historic moment solo with “Suit & Tie” and “Mirrors”.

Afterward, Timberlake was awarded the Michael Jackson Video Vanguard Award, which he dedicated to his former group by saying, “Half the Moonmen I’ve ever won were with those four guys right there.”

The groups reunion certainly comes as a bit of surprise. In recent years, Timberlake appeared uninterested at the idea and often refused to even address the possibility in interviews. Whats more, according to Kirkpatrick, Timberlake failed to invite any of his group mates to his wedding in order to avoid an N Sync reunion.

The rest of N Sync has been open to the idea, however. Back in January, Fatone tweeted his support for a reunion, writing, Want an N Sync reunion?! I say, who knows if it will happen, but if time came, I would be down to do it! U got my answer! 4 to go, good luck. In February, Bass told E! News that he didnt see a reunion happening any time soon, but added, Justin is a little busy at the moment. Maybe when he is done, we might have a little reunion.

It’s unclear whether the group’s reunion will continue on beyond tonight. However, with Justin Timberlake’s solo tour set to kick off in September, any further reunion activities are presumably a long way off.

For additional videos from the 2013 VMAS, including performances by Kanye West, Drake, Lady Gaga, and Katy Perry, click here.

Previous Story
Eminem to release The Marshall Mathers LP 2 on November 5th
Next Story
The Replacements shrug off 22 years at Riot Fest Toronto. It was worth the wait.
Popular
More Stories
[fu-upload-form form_layout="media" title="Submit Your Photo"][input type="hidden" name="ugc" value="1"][/fu-upload-form]